For the first time in the Open Era, three Italian men are through to the round of 16 in the same Grand Slam event. Two will face matches against Rafael Nadal and Novak Djokovic, while one — Matteo Berrettini — lucked out when his opponent, the 20-time Grand Slam tournament champion Roger Federer, withdrew from the tournament on Sunday.

Because of the number of matches cycling through courts, the times for individual matchups are estimates and may fluctuate based on when earlier play is completed. All times are Eastern Standard. 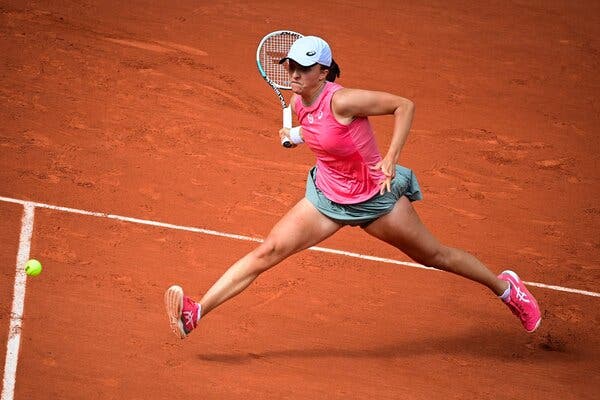 Iga Swiatek, the defending champion, has not lost a set at the French Open since her loss in Paris in 2019. In the third round, Anett Kontaveit pushed her to a tiebreak, the closest any player has come in the past few years. For her troubles, Swiatek rewarded Kontaveit with a 6-0 sweep in the second set, as if to provide a lesson to future challengers demonstrating what happens if you push her.

On the way to her first round of 16 appearance, Marta Kostyuk, ranked No. 81, upset the 12th seed Garbine Muguruza in the first round. The 18-year-old Kostyuk has already been a fixture on the WTA Tour for a couple of years. This match between Kostyuk and Swiatek will offer a first look at the dynamic play these two phenoms are capable of generating.

Rafael Nadal has won 32 straight matches at the French Open, going back to his 2017 campaign. He continues to appear on the red clay of Paris as a near-mythical figure, a player who through sheer determination can make his opponents look like mere distractions. He has lost just 27 games across the first three rounds of play, and seems poised to easily push himself back into another final at Roland Garros.

Jannik Sinner, the 18th seed, faced Nadal in the second round of the Italian Open in May. Although the 19-year-old Sinner lost in straight sets, he showed some promise. With so many of the talented players that have arrived on the ATP Tour in the past decade, it is hard to measure their abilities when put up against the dominant abilities of Nadal, Djokovic and Federer. Sinner is no exception, but there is one possible point of comparison. In 2020, Sinner lost to Nadal in the quarterfinals of the French Open. Although it is an earlier round, the match this year can be measured against their previous encounter. And if Sinner can show his improvement, he may be the first player to take a set away from Rafael Nadal at Roland Garros since Dominic Thiem in the 2019 Final.

Lorenzo Musetti, who won the 2019 Junior Australian Open, has had a breakout year after going through qualifying at the Italian Open in 2020 and then beating Stan Wawrinka and Kei Nishikori in short order. Now in his first major main draw, he has made it through to the second week of play after upsetting David Goffin, the 13th seed, in straight sets in the first round and outlasting Marco Cecchinato through five sets on Saturday.

Novak Djokovic, the first seed, has lost only 23 games as he swept through the earlier rounds. Djokovic, who won the French Open in 2016, is a grinding, physical player. (If it weren’t for Rafael Nadal, he would most likely have more French Open titles.) His flexibility allows him to slide around on the red clay for shots that would normally be out of reach, extending points and forcing his opponents into errors. As he faces off against the young Italian, it’s not entirely clear what threats Djokovic will be concerned with. At best, the Italian will have to take the experience in stride, and attempt to learn from it.

Ons Jabeur, the 25th seed, with her run at the Australian Open in 2020, became the first Arab woman to reach the quarterfinals of a major event. And the Tunisian has continued to impress, with a pair of top 10 victories and a slew of entertaining matches under her belt. Jabeur has a well-rounded game, often adjusting her attacking style to match her opponents’ weaknesses and take advantage of slight missteps in positioning.

Coco Gauff, the 24th seed, received a walkover halfway through her third-round match against Jennifer Brady. Brady had been quietly struggling with an injury throughout the tournament, and was unable to continue after the first set. Now Gauff, at 17 years old, is playing for a spot in her first Grand Slam quarterfinal. She had two tough matches in her first two rounds that went to tiebreakers. After a slew of strong performances over the past two months, Gauff should feel that she can edge Jabeur as long as she remains consistent throughout the match.

Martina Navratilova Has Plenty to Say