Iga Swiatek is the only player remaining in the women’s draw who has previously reached the final of a Grand Slam event. Swiatek, the defending champion, is still the favorite to win the tournament, but the inspired performances of those left in the draw means that it won’t be easy for her to reach the women’s singles final on Saturday.

Barbora Krejcikova, the world No. 33, is primarily a doubles specialist, having won two Grand Slam tournament events and reached at least the semifinals on six other occasions. After a fourth-round breakout in singles at the French Open last year, Krejcikova has bettered her performance once again, by outmaneuvering opponents who focus on the power of their shots.

Coco Gauff, the 24th seed, has secured a spot on the U.S. Olympic tennis team and is now playing in her first major quarterfinal. She has often impressed with her mental strength and has improved her point construction over the past few years. This match promises to be tactically astute, and a good lesson for any tennis player on how to play patiently. 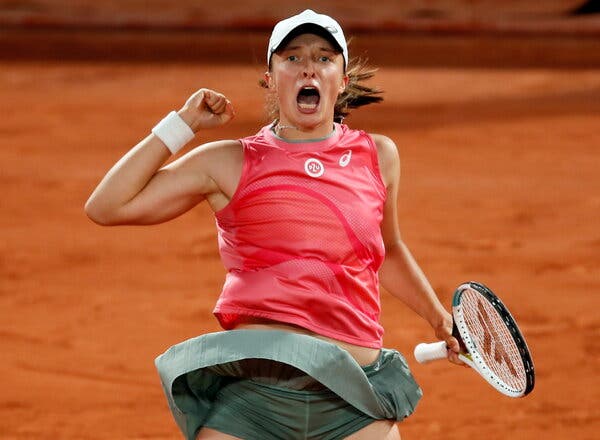 Iga Swiatek after winning her fourth-round match against Marta Kostyuk on Monday.Credit…Gonzalo Fuentes/Reuters

Iga Swiatek, the eighth seed and the defending champion, has barnstormed back into the quarterfinals at Roland Garros without dropping a set, an impressive show of consistency from the 20-year-old.

Maria Sakkari, the 17th seed, has reached her first Grand Slam quarterfinal after an impressive upset over last year’s finalist, Sofia Kenin. Sakkari’s powerful baseline shots can unsettle even the steadiest players, and Swiatek will need to counter with some inventive play.

Rafael Nadal has looked unstoppable at this year’s French Open.Credit…Pete Kiehart for The New York Times

Diego Schwartzman, the 10th seed, has not dropped a set on his way to the quarterfinals. The clay court specialist reached the semifinals of the French Open last year but lost to Rafael Nadal in straight sets.

Nadal, a 13-time French Open champion, has once again looked like an unstoppable force. However, a change in style has become clear this year. When he was younger, Nadal won matches on clay by slowly grinding his opponents down. He has switched to more aggressive points, putting shots away and coming to the net more quickly. This style has won him 35 straight sets over the past couple of years, and it seems likely that he will continue to cruise through to the next round.

Novak Djokovic had to fight back from two sets down during his fourth-round match against Lorenzo Musetti on Monday.Credit…Ian Langsdon/EPA, via Shutterstock

Novak Djokovic, the first seed, was pushed by Lorenzo Musetti to five sets in his round of 16 match. Djokovic lost the first two sets in tight tiebreakers as Musetti played an inspired stretch of tennis before Djokovic rallied, losing only one game before Musetti retired in the fifth set.

Matteo Berrettini, the ninth seed, had a bit of luck, getting a walkover as Roger Federer withdrew from the French Open ahead of their round of 16 match. Now, well rested, Berrettini will be trying to take the initiative and draw on his striking power to push Djokovic to the edge of his capabilities.

W.N.B.A. Preview: The Mystics Get Their Stars Back in the East