As he heard a judge hand down verdicts at the Derek Chauvin murder trial last week, Charles Adams, a high school football coach and former Minneapolis cop, did not celebrate. There isno reviving George Floyd, Chauvin’s victim, and much to change in the culture of law enforcement.

Adams couldn’t stop thinking and worrying about his team, the Polars of Minneapolis North.

“The streets of my city don’t need more unrest,” he recalled thinking, as we spoke last week. “And my players, they don’t need more violence. What they need is relief from all the pressure they are constantly under.”

Adams, 40,has a unique view of that pressure.

Known as a pillar of the city’s economically depressed, predominantly Black north side, he is one of Minnesota’s best high school football coaches, responsible for turning a moribund team into a perennial power and state champion.

He also served 20 years on the Minneapolis police force, a Black cop working the neighborhoods in which he was raised and following the footsteps of his father, a precinct chief who has served nearly four decades on the M.P.D.

Just like his father, Adams made it a point to work with residents instead of lording power over them. As I chronicled in a column last October, he has always been focused on helping his community’s youth.

“With the verdicts done, people need to know what it’s been like for kids who’ve grown up in this city like the players on my team,” he said. “They’ve lived through so much trauma.”

And not just over the past year of the coronavirus pandemic. Adams said all of his players were well aware of the long string of deadly police shootings of Black men that have racked Minneapolis throughout their adolescence, even beyond Floyd in 2020.

There was Jamar Clark, shot to death by the police blocks from Minneapolis North in 2015.

And Philando Castile, shot to death by the police in a nearby suburb in 2016.

And Daunte Wright, shot to death this month by a suburban police officer who is said to have thought her gun was a Taser.

Those killings and the long history of tension between law enforcement and Minneapolis’s Black community have given the Polars an understandable wariness of the police. The team’s tight bond with Adams and his assistant coaches, many of whom are Black police officers, allows the players to heed their coaches’ advice on how to act when confronted by cops. 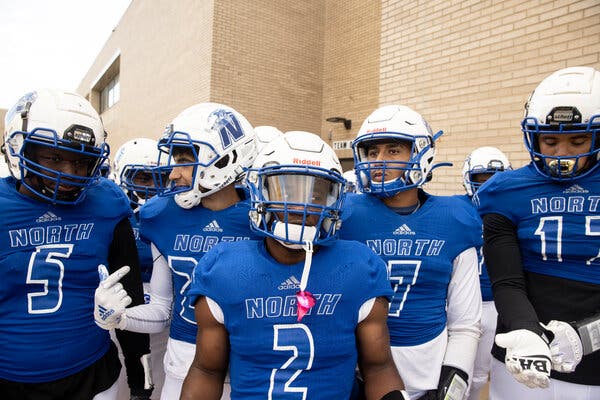 North football players lined up to walk to the stadium for their first home game of the season in October 2020.Credit…Tim Gruber for The New York Times

“For us, it’s kind of like we are always in a pickle,” Tae-Zhan Gilchrist, 17, an offensive lineman on the team, said when we spoke after the Chauvin trial. “We got to watch out for the crime in our neighborhood but avoid the police, too. Everywhere you go, there is always this tension. Even though you might be smiling and having a good time, danger and worry are always in the back of your head.”

“It’s heartbreaking,” he said, “but it is life. There are certain things in life you can’t avoid.”

Every player I’ve talked to from Minneapolis North’s football team over the last year has expressed similar sentiments.

The players also told me how their team has been a refuge.

“The way the coaches care about us and understand what we’re going through, being with the team is like therapy for us,” said Azrie Yeager, 15, a freshman who plays on the offensive line. “After a long day of hearing about all the troubles, it’s been great to know that there’s a place where I can open up. It just clears the mind.”

When I spoke to the team last October, it was early in a season truncated by the pandemic. North had been favored to make it to the state small school championship game for the second year in a row. It finished with a 6-1 record and a section title, but high school officials canceled the state tournament, cutting off any championship run.

Adams and his team didn’t complain about the decision, though. At least they’d had a football season. Through fall and winter, Minneapolis North held classes virtually. Businesses and community centers closed. In the aftermath of Floyd’s murder, with so much of life shut down and so much despair and tension in the air, violence spiked. It touched the team in a searing way: A player from the 2016 state champion team came home from college and was shot to death near the high school.

The players needed an outlet. For many of them, football was the only option.

“Where would we have been without football this year?” Adams wondered aloud as we spoke. “In serious trouble. We needed it this year more than ever.”

He needed the ballast as much as his players did. After 20 years, Adams left the M.P.D. last October for a better-paying job as director of security for the Minnesota Twins. He wouldn’t have taken the position if the Twins had said he would not be given the time to keep coaching North.

Being a Minneapolis police officer is still deep in his bones, though. Adams said that as the Chauvin trial wore on and the verdict neared, it was hard for him to let go of the fear that if Chauvin received anything less than guilty on all charges destructive protests would again occur.

Adams shuddered at the memory of the night last year, not long after Floyd’s murder, when protest raged in Minneapolis, and he dressed in riot gear to head to the front lines.

That evening he spoke to his players over videoconference to tell them he loved them and that he wasn’t sure he’d live through the night to see them again.

The memory, he said, caused something akin to post-traumatic stress disorder.

So do his players.

With the Chauvin trial over, Adams and his team are warily moving forward.

“There’s still so much to be done and we have to continue to be aware and fight for our rights,” Gilchrist said. “The trial is over, but every morning here you still wake up and wonder, ‘What terrible thing is going to happen next?’”