Michael Oliver blew his whistle, but nothing happened. The Premier League had been waiting for three months for this moment, forced into unwilling suspension by the coronavirus pandemic. This was its grand return, the first game back, a late spring evening at Villa Park last June. And yet there was no sound, no fury.

Instead, as Oliver’s whistle trilled, the players of Aston Villa and Sheffield United dropped to one knee. Though none of the players had done it before, the choreography was flawless. They remained there for a few seconds, a silent, defiant tableau. English soccer’s year of protest had begun.

Some of the details have changed since the players started taking a knee. That night, for example, the back of each player’s jersey bore not their name but the slogan Black Lives Matter. Badges on their sleeves that once bore the same phrase have since replaced by new ones reading No Room For Racism.

The act, though, has endured for the last 11 months, playing out before every Premier League game and at the vast majority of matches in the other three tiers of professional soccer in England. For many, that longevity has supplemented, rather than diminished, the significance of the act.

“I feel the power every time the players drop down and show solidarity,” said Troy Townsend, the head of development at Kick It Out, a nonprofit organization that works to promote equality and inclusion within soccer.

The protest has served, according to Simone Pound, Head of Equalities at the Professional Footballers’ Association, the players’ union, as an “impactful call for equality and justice.”

“I believe in taking the knee,” she said. “I’m grateful to the players, too, because as a Black woman, I feel like they provided a symbol of immense power at a time when we all needed it.” 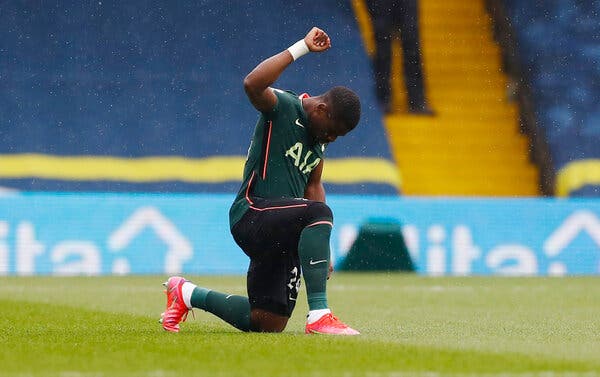 Tottenham’s Serge Aurier before kickoff at Leeds this month.Credit…Pool photo by Jason Cairnduff

The players did not have to defy the league to take part. No player has been threatened with ostracism or censure. No national anthem — a largely American pregame tradition — brought politics or patriotism into play. The protests have, instead, taken place with the express support of the game’s authorities, its organizers, its broadcasters, its owners. A sport with no longstanding tradition of protest has, for almost a year, not only permitted but encouraged its players to make their voices heard.

There are some, though, who worry that kind of sanctioning only serves to neuter the protest, that by absorbing it into the ritual of every game — the walk from the tunnel, the pregame team photo, the jog into position — it has become “just something we do,” as Wilfried Zaha, the Crystal Palace forward, has put it.

In their eyes, the year of kneeling will soon recede into the past with all of the other campaigns and slogans that soccer has rolled out before, all of them designed to give the impression of demanding change while avoiding the need to institute it.

“Apart from people talking about it, what has actually changed in football?” said Les Ferdinand, a former Premier League striker and now the technical director of Queens Park Rangers. “I did think it was powerful, at the start, but we don’t need more badges or T-shirts or gestures. We’re asking for action.”

Troy Deeney waited and waited for someone to mention Black Lives Matter. Last June, Deeney, the Watford striker, joined the other 19 captains of the Premier League’s teams on a video call with the competition’s executives to discuss the practicalities of the league’s looming return to action.

The agenda for the meeting ran to six items. Last on the list was how the league and its players might respond to the Black Lives Matter moment. After the fifth subject had been cleared, though, Deeney heard someone say: “Unless anyone’s got anything else to say, we’ll wrap the meeting up there.”

Deeney did have something to say. He and the Leicester captain Wes Morgan, who is also Black, had been exchanging messages during the call. Deeney told Morgan he was going to speak up. “Actually, I’ve got a huge problem,” Deeney said, taking himself off mute. Eight minutes later, by his own account, he finished speaking.

At that point, everyone else joined in. Kevin De Bruyne, Jordan Henderson and Seamus Coleman — the white captains of Manchester City, Liverpool and Everton — offered their support for what Deeney had said. The league’s executives, too, indicated that they were open to ideas.

Sheffield United’s David McGoldrick was one of the first to suggest players kneel before matches.Credit…Pool photo by Peter Powell

It was De Bruyne who suggested replacing the players’ names with Black Lives Matter. Henderson suggested a badge. Deeney volunteered his wife’s design services. “Within 24 hours it went from try and avoid the conversation to having Black Lives Matter on the back and the Premier League badge changed,” Deeney said.

In hindsight, the most significant suggestion came from David McGoldrick, the Sheffield United captain. He wondered if the players should borrow the symbolism of Colin Kaepernick and a host of players in American sports and take a knee before games.

“It’s not an accident that the gesture came from America,” Townsend said. “I know there’s been communication between players in the United States and players in England. American athletes have empowered players over here. People used to worry that things like that were bad for their club, but now the players realize the strength and impact they have.”

The players did not, at that stage, have a plan for how long the kneeling protests might last. They continued to kneel before every game while playing out the delayed end of last season. And on the eve of the new campaign, in September, they reaffirmed their commitment to the idea. “We will carry on doing it until there’s change,” said Lewis Dunk, the Brighton captain. The game’s authorities again gave their blessing.

“The impact was obviously greater at the start,” said Nedum Onuoha, the former Manchester City defender. “People have got used to it. But every time the players do it, the commentators have to say something about it, they have to explain why they’re doing it. These are still conversations that need to be had. They still highlight that greater issue.”

Over the course of the season, though, the spirit of unity that had inspired the protest started to splinter. In September, Queens Park Rangers announced that its players would no longer take the knee before games. Ferdinand said the gesture had “reached the stage of good P.R. but little more than that.”

After the turn of the year, others followed suit: first individual players — Lyle Taylor of Nottingham Forest, Brentford’s Ivan Toney and Palace’s Zaha — and then entire clubs, including Brentford and Bournemouth. “We’re kind of being used as puppets,” Toney said. “Take the knee and the people at the top can rest for a while.” Zaha, for one, said he preferred to “stand tall.”

As he looks back on almost a year of protest within soccer, there is one image that stands out to Kick It Out’s Townsend. It is not from those early days last year but from this April, long after taking the knee had become an accepted, unremarkable part of soccer’s iconography.

In March, a Slavia Prague player — Ondrej Kudela — was accused of racially abusing Glen Kamara, a Black midfielder for the Scottish champion Rangers, during a Europa League game. The next month, in the next round of the competition, Slavia Prague was drawn against Arsenal.

When the teams met in the second leg in Prague, days after Kudela was issued a 10-game suspension for abusing Kamara, Slavia’s players stood together on the center circle, their arms draped around each other’s shoulders. A few yards away, Arsenal’s starters took a knee. Their captain, Alexandre Lacazette, moved even closer, staring directly at the Slavia team from one knee, as if challenging them to understand his gesture.

“It was one of the most powerful images I have seen,” Townsend said. “And the referee, the symbol of authority, was kneeling with them.”

Townsend has worked in soccer for long enough to know that the power of images alone will not be enough to institute the sort of change that he knows is necessary. “Too often, the game has let the victim down,” he said, pointing to the disparity between the punishments meted out to fans found guilty of racially abusing players and a fellow professional doing so.

Ferdinand points, too, to the issue of the almost complete lack of Black managers and executives in the English game, and especially at its highest levels like the Premier League.

Behind the scenes, though, some of that change — the incremental, structural sort — may be starting to happen. The Premier League now has a Black Participants’ Working Group feeding into its policy decisions. The Professional Footballers’ Association, the English players union, is running governance courses designed to prepare its Black members to take places on the boards of clubs and governing bodies.

“Changes are happening,” Pound said. “Are they happening fast enough? No. But will those voices calling for change potentially make that change happen faster? Yes, I think they will.”

What nobody is quite sure of, at this point, is what comes next. Talks continue about what form, if any, the ongoing protest will take next season. A number of possibilities are under discussion.

Les Ferdinand, Q.P.R.’s director of football, has been a vocal proponent of seeing more people of color in roles like his.Credit…Paul Childs/Action Images, via Reuters

Onuoha suspects that only when the kneeling stops will its value be seen. “If you take it away, then the topic vanishes,” he said. He said any new form of protest has to be as visible as kneeling. “Make people have to mention it, so that those conversations keep happening.”

“Doing something is better than doing nothing,” he added. “If this is imperfect for you, then the onus is on you to come up with something better.”

Pound worries, a little, that the message may be lost in a discussion over what individual players choose to do. Townsend does not want the kneeling to stop, not when it may resonate more than ever next season, once fans return to stadiums.

“I think football has got away with it a little bit,” he said. “Everyone could jump on board because you were rarely going to have an incident in an empty ground.” That may change, he said, when there are people in the stands who might — as a small number did at last weekend’s F.A. Cup final — not agree with the act, or even with the broader sentiment.

Townsend said he was no less tired than Ferdinand of soccer’s ability to come up with a campaign, to pat itself on the back, and then to move on. He, too, is sick of slogans that lead to stasis.

This time, though, he detects a genuine shift. For a year, before every game, the players of the Premier League have been protesting. There is a momentum there that will not just evaporate. “The key thing is that all of this has been driven by the players,” he said. “And the players have made it very clear that they want change.”

Kevin Durant and (Possibly) the Greatest Basketball Team of All Time