LIVERPOOL, England — The goals arrived just as the nerves were fraying and the anxiety mounting, just as the 10,000 fans inside Anfield for the first time in a long time were recalling that watching soccer, live and in the flesh, is not how memory might have made it seem. It is not all celebration and carnival and song. Most of the time, it is nothing but stress.

In the end, Liverpool’s road on the final day of the Premier League season was a straight one; the twists and turns would come elsewhere. Jürgen Klopp’s team needed to win to clinch a place in next season’s Champions League, and it duly delivered one by beating Crystal Palace, 2-0. The fretting and the furrowing would be for Chelsea and Leicester City, the other two teams in the chase.

But Anfield did not know that, 20 minutes in, when Leicester took the lead at home against Tottenham and Liverpool was toiling against Palace, the sort of obdurate and organized opponent that had made the club’s winter so bleak, and for a brief moment the table rumbled and Klopp’s team was fifth, out in the cold.

Fans had not been here for the six consecutive home defeats that derailed Liverpool’s season, of course: they had all happened in a sterile and silent Anfield, but they had left a scar. And so as the news from Leicester filtered through, the mood seemed to shift. The songs, initially jubilant, felt a little more urgent. 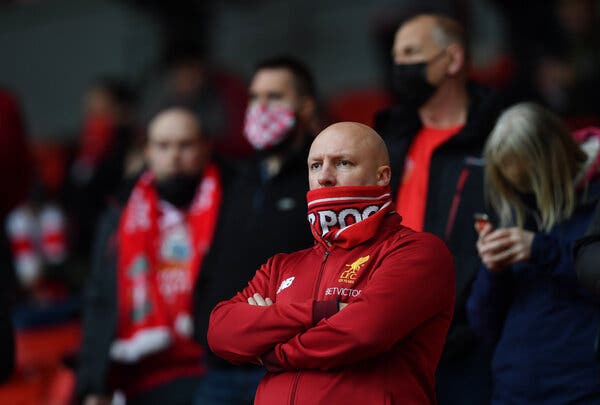 It took some time for the fans to set aside their stress and celebrate again.Credit…Pool photo by Paul Ellis

Sadio Mané’s opening goal proved a potent antidote, for a while. Chelsea was losing at Aston Villa, Leicester winning. But as the clock ticked on, the specter of the worst-case scenario appeared. Liverpool’s margins were fine. One mistake and a goal elsewhere and there would, at the last, be a sting in the tail.

Anfield seemed on edge once more. The songs had stopped. In their stead came impatient rumblings whenever danger seemed to bubble, disappointed groans when an attack broke down. It is not only fans who might have romanticized the reality of being at a game, of playing in front of a crowd. It can inject energy and vim and zest into players. But its demands can also cow and daunt and unnerve them.

It was at that point, with the game and the day and the season entering its final few minutes, that Mané scored again. Anfield exhaled. The news elsewhere was good: Chelsea was losing, and so, too, was Leicester, kicking away the reprieve it had been offered. Liverpool had left it late to be sure, but it was safe.

The songs could start again; the final odds and ends could be tied up. The departing Georginio Wijnaldum was afforded a rapturous ovation by the fans, and a guard of honor by his teammates. There was a lap of appreciation. Coming back to Anfield would bring a happy return.

Liverpool didn’t need it in the end, but Gareth Bale and Spurs provided some late — and vital — assistance at Leicester.Credit…Pool photo by Shaun Botterill

By Liverpool’s recent standards, of course, this season still goes down as a disappointment. In 2019, the club’s last game was a victory in the Champions League final. Last year, belatedly, its final appearance at Anfield was to lift the Premier League trophy. Merely securing a seat at Europe’s top table is not what Klopp and his players set out to do this year.

But all achievements are relative. Liverpool is not alone in having suffered a spree of injuries this season, but it is not easy to come up with another team — perhaps Leicester aside — that has been quite so hard hit. Klopp has been without his first-choice central defense since November. He lost his only specialist backup in January.

The two midfielders he deputized as back-line cover missed considerable spells, too (one, the captain Jordan Henderson, only returned to the substitutes’ ranks on Sunday). When he said, on the eve of this game, that Manchester City would not have been crowned champion if it had suffered similarly, particularly in the condensed schedule of the pandemic, it was treated as a barb, an unbecoming serving of sour grapes. He did have a point, though.

Claiming third place, in those circumstances, may not represent a great triumph, but it still ranks as a considerable achievement. As recently as March, Liverpool was in free fall, risking compounding the hundreds of millions of dollars lost as a result of the pandemic by missing out on the riches of the Champions League.

Klopp, though, has forged an impressive unanimity of purpose since then. Liverpool’s last 10 games have brought eight wins, and no defeats. It has been the in-form team in English soccer for the last two months. It is understandable that Klopp’s vision of the future is bullish, centered on the belief that when his squad is restored to fitness, Liverpool will be “the team nobody wants to play” once more.

It is not, though, quite so straightforward. The pandemic might have had a more direct impact on teams like Arsenal and Tottenham, but its effect on Liverpool should not be underestimated.

The club has won no little acclaim in recent years for its astute use of the transfer market: spending big when necessary — on the likes of Alisson and Virgil van Dijk — but also on its ability to snuffle out comparative bargains: Andy Robertson, Wijnaldum and even, to some extent, Mohamed Salah.

Such liberal spending may not be possible as the club wrestles with the financial black hole opened by the pandemic. It will not be alone in that, of course. For Liverpool, though, just as worrying is the fact that it has only been able to spend that money because of its almost unrivaled ability to sell players.

For Jürgen Klopp and James Milner, merely salvaging a Champions League place from this season was worth celebrating. Next year, the team and its fans will expect more.Credit…Pool photo by Paul Ellis

Liverpool has sold better than anyone in recent years, both in gleaning vast sums for its stars — the $170 million or so banked from Barcelona for Philippe Coutinho — and in haggling premium amounts for unwanted assets.

It sold Dominic Solanke to Bournemouth for $22 million or so, and the backup goalkeeper Danny Ward to Leicester for $15 million. Danny Ings, Ryan Kent and Rafa Camacho — the former aside, names hardly recalled at Anfield — raised about $50 million between them.

Those are prices, though, that belong to another world, one of boundless money and limited thought. Liverpool will not be able to raise such eye-watering sums for Divock Origi and Xherdan Shaqiri and Marko Grujic and the rest this summer. If it harbored hopes of selling either Mané or Salah for a premium fee in order to finance the team’s next transformation, it is likely to be disappointed, too. For players of their age, the luxury market has stalled as well.

Liverpool’s late run to the Champions League has, perhaps, drawn a little of the sting, given the club a little more elastic to play with as seeks to avoid such a narrow escape next year. With his injured stalwarts returning, Klopp is right to expect brighter things. But the road is not always as straight as it turned out to be at the end of a fraught and troubled campaign. There are still twists and turns, chicanes and hairpins, to negotiate.