Efforts to prevent the use of performance-enhancing drugs ahead of the 2016 Olympics could not have gone much worse.

In the months before the Rio de Janeiro Games, more than 1,900 athletes across 10 key sports — including track and field, weight lifting and cycling — were not tested, a failure that doping officials vowed would not be repeated in the next Olympic cycle.

Yet five years later, the world’s antidoping organizations are struggling to live up to that promise ahead of this summer’s Tokyo Games, in part because the coronavirus pandemic has made it extremely difficult to fix a problem that has persisted for decades: Testing is inconsistent across numerous countries.

“The antidoping system is very unbalanced,” said Benjamin Cohen, director general of the International Testing Agency, an independent, nonprofit organization that the International Olympic Committee set up to manage the testing program for the Olympics. “Some organizations are very strong, and some are less resourced.” 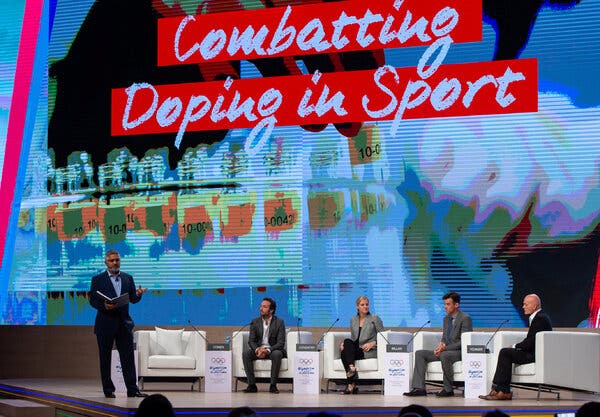 Benjamin Cohen, second from left, is the director general for the International Testing Agency. Cohen participated in a panel discussion at the Youth Olympic Games in Buenos Aires in 2018.Credit…Reuters

According to the World Anti-Doping Agency, which creates guidance for antidoping organizations and keeps track of their testing practices, the number of tests administered throughout the world has picked up substantially in recent months, especially compared with last spring, when testing essentially stopped because of the public health crisis.

It is not clear, though, how testing since the start of 2020 breaks down by country because the organization does not promptly release such data beyond the overall number of tests. WADA, which released its report on testing for 2019 in December 2020, claims it needs many months to sort through testing data to assess what it means.

That imbalance is a common complaint among athletes from a handful of countries where testing is robust, like the United States, Britain, Canada and Norway. “I personally have been drug tested 18 times since February of 2020,” Lilly King, the American swimmer who won two gold medals in Rio, said during a news conference in April. “Obviously, we don’t know how the other countries will be testing.

Because many athletes are traveling to fewer competitions, they are harder to reach for testing.

“We’re not back to the full capacity we were operating at, but we are very close,” said Jeremy Luke, senior director of sport integrity for the Canadian Center for Ethics in Sport, which manages antidoping efforts in that country. Luke said that in recent months officials had focused heavily on athletes who have made the Olympic team and those who are attempting to earn a spot. “It’s not operating in the same way as in the past, but it is operating.”

A robust, comprehensive testing program hardly ensures doping-free competitions, even though positive tests are rare. Lance Armstrong, the retired cyclist who admitted to doping throughout his career, won the Tour de France seven times without getting tossed for a positive test. But the tests put athletes on notice that they are being monitored and make it more complicated to use performance-enhancing drugs without getting caught.

Nearly every country and international sports organization keeps private the names and exact dates connected to tests. The United States is a rare exception.

American athletes pushed for transparency in the early 2000s, when a series of scandals threatened the credibility of the country’s sporting success. Those who support publicly revealing who gets tested, and their results, say it is the only way to ensure accountability and provide athletes with information about how often their opponents have been tested. Some people who argue against public disclosure say it could help cheaters detect testing patterns and game the system.

“You get five different experts in a room and you will get six different opinions on this,” Cohen said.

“We have been considering it, but it is complicated for us, as we need to seek specific data protection approval from the Monaco authorities to do so,” said Aditya Kumar, an official with the Athletics Integrity Unit, which manages the testing program for World Athletics, the global governing body for track and field.

As part of its effort to not repeat mistakes made before the Rio Games, the International Testing Agency convened a group of antidoping experts in December to study what tests needed to be done during the crucial months leading up to the Tokyo Games, which begin in late July. In 2016, that work began less than three months before the start of the Games.

That short review period was one of a handful of missteps that made the Rio Games a low point in the antidoping campaign. Details of Russia’s doping scandal became public just ahead of the Games, and just weeks before the opening ceremony WADA shut down the Rio testing lab because it did not meet international standards. The lab reopened just ahead of the Olympics.

A longer planning period is crucial because testing athletes only after they arrive for the Olympics is too late. By that time, any athlete who chooses to do so will have had enough time to use performance-enhancing drugs and to gain the benefits from them in training. Those benefits last long after the drugs have been flushed from their bodies.

The International Testing Agency’s group recommended 25,000 tests on specific athletes — in some cases as many as six on a single athlete — to be performed between January and the start of the Tokyo Games.

Stanislav Pozdnyakov, the president of the Russian Olympic Committee, speaking during a news conference in 2019.Credit…Sergei Ilnitsky/EPA, via Shutterstock

It meets every two weeks and reviews reports on tests in 150 countries from antidoping organizations and international sports federations. It notes the gaps and nudges those who can perform the tests to do so.

Cohen said there had been a trend: The national antidoping agencies, which are most prevalent in larger countries and in those with the resources to set up such organizations, have largely been good about fulfilling the recommendations. The regional agencies, which are often responsible for testing in multiple countries, typically poorer ones, have continued to have difficulties.

Other organizations, like the global governing bodies for individual sports, attempt to narrow the gaps, but can do only so much.

The issue now, Cohen said, is a combination of money and logistical problems related to the pandemic, like closed borders and fears of infection during the process of collecting urine or blood samples.

For one more week, the I.T.A. is powerless to do anything more than point out the shortcomings and urge doping organizations to increase their testing during this crucial period. That will change soon. The I.T.A. will gain the power to test athletes everywhere on May 13, more than two months ahead of the Games. In the past, Olympic organizers were basically able to test athletes only after they arrived in the host country.

The I.T.A. says it will disclose how many tests it conducted on athletes from each country after the Games, without revealing individual names.

“We won’t be able to solve all the world’s problems, but we will be able to fill some of the gaps,” Cohen said.