James Kaprielian finally made it to the Bronx, six years after the Yankees took him in the first round of the amateur draft, and he beat his original club by pitching three-hit ball over five and two-thirds innings in a 5-3 victory Friday night that extended the Oakland Athletics’ winning streak to seven.

Tony Kemp hit a three-run homer in the sixth on a hanging slider from Wandy Peralta (1-1), overcoming a 3-2 deficit with the first home run by a left-handed hitter this year off the southpaw reliever.

Kaprielian made his major league debut last Aug. 16, and has been a rotation regular this season for A.L. West-leading Oakland, which improved to 13-2 in June. He struck out four of his first five batters, threw 44 four-seam fastballs that averaged 93 miles per hour and mixed in 22 sliders, two curveballs and 12 changeups.

On the first night coronavirus attendance restrictions were lifted in the Bronx, Kaprielian (4-1) got to pitch before a crowd of 24,037 at Yankee Stadium.

With the A’s wearing kelly green jerseys for a rare road game, he allowed three runs, struck out seven and walked one.

The Yankees had won three straight games when trailing after six innings but fell short in doing it for the fourth game in a row, something the team did last as the Highlanders from May 17-20, 1910, according to STATS.

Yusmeiro Petit allowed one hit in one and a third innings, Jake Diekman pitched a hitless eighth and Lou Trevino completed the four-hitter for his 12th save in 14 chances.

Matt Olson hit his 19th homer in the first and Mark Canha added an R.B.I. single in the third off Jameson Taillon, who allowed two runs and four hits in four and two-thirds innings and is 0-2 in his last eight starts. He has one win in 13 starts with the Yankees.

D.J. LeMahieu’s two-run homer in the third and Rougned Odor’s solo drive in the fifth put the Yankees ahead.

Peralta allowed singles to Matt Chapman and Sean Murphy and was one strike from ending the inning when Kemp hit his third homer this season.

No Home Run Derby for Judge

Aaron Judge won the 2017 home run derby as a rookie, in a season in which he hit 52 homers, breaking Mark McGwire’s rookie record. Judge did not participate in the event in 2018 and 2019 and will not participate this season either.

“I’ve got no interest right now unless the All-Star game is back in New York soon,” Judge said.

The Yankees last hosted the All-Star game in 2008, the final season in old Yankee Stadium. It last was held in New York at Citi Field in 2013. 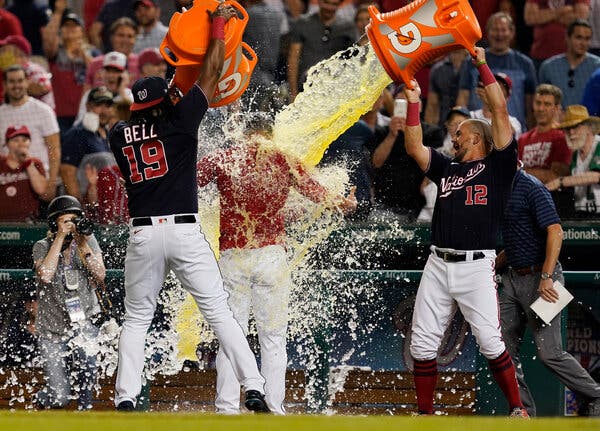 Washington’s Yan Gomes got a gatorade bath after his run-scoring single gave the Nationals a walk-off win.Credit…Carolyn Kaster/Associated Press

WASHINGTON — Yan Gomes hit a game-ending single in the ninth inning, Erick Fedde extended his scoreless streak to 20 innings and the Washington Nationals two-hit the first-place Mets in a 1-0 victory Friday night.

Juan Soto opened the ninth with a walk and moved to third on Ryan Zimmerman’s single to right. Gomes then singled to left to beat Edwin Diaz (1-2).

Brad Hand (4-2) pitched the ninth to close out Washington’s gem. The Nationals have won a season-high five straight.

Fedde pitched seven dominant innings, allowing two hits and four walks while striking out six. His last out was Tomas Nido’s grounder to third, and the typically stoic Fedde yelled and flexed his arms on his way off the field.

The right-hander’s scoreless streak is the longest on the team this season, one inning more than ace Max Scherzer’s earlier run. Fedde began the run May 11, and it spans nearly a monthlong stint on the Covid-19 injured list that ended last Saturday.

Fedde’s E.R.A. is down to 3.33. He has been crucial for the Nationals since Stephen Strasburg was placed on the 10-day injured list June 2. Friday night was Fedde’s second start of seven shutout innings among his last three times on the mound.

Joey Lucchesi countered with five and a third scoreless innings, allowing four hits and two walks while striking out five. Three Mets relievers followed with two and two-thirds scoreless before Diaz struggled in the ninth.

The Nationals loaded the bases with one out in the third. Trea Turner’s crisp grounder to third was grabbed by Jonathan Villar, who stepped on the bag and threw to first for a double play. The Nationals entered the game 28th in O.P.S. with the bases loaded.

Washington pulled together another threat in the bottom of the sixth when they put two on with one out to chase Lucchesi. Miguel Castro relieved and induced a ground-ball double play on a 3-1 pitch to Zimmerman. The Nationals grounded into three double plays Friday.

In Spain, Title Race Could Be the Start of Something Better