Two years ago, Nick Suriano put his life on hold to chase an Olympic dream.

A national collegiate champion in wrestling, Suriano took a year off from competing for Rutgers to prepare for the 2020 Summer Games in Tokyo. After the Games were postponed for a year because of the coronavirus pandemic, Suriano doubled down, skipping another year of college and moving to Phoenix from his home in New Jersey to join a special training group.

For eight months, he thought of little besides maintaining his health and claiming a place on the United States team by winning at the Olympic trials. Many considered him the favorite in the 125-pound class. “I was at the healthiest point in my life,” he said. 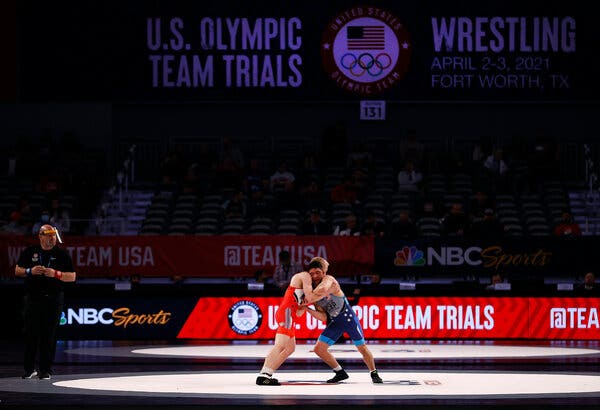 The trials for the United States Olympic wrestling team went off without at least one favorite.Credit…Tom Pennington/Getty Images

But only days before the start of the trials on April 2 in Texas, a nasal swab changed everything. Suriano tested negative for the coronavirus before boarding a plane bound for Fort Worth, then tested positive shortly after he arrived.

He never got a chance to take the mat. His Olympic dream, years in the making, was over.

“It’s a lot for me to wrap my head around,” he said in an interview from his home.

The pandemic has been wreaking havoc with sports in general, and the Olympics in particular, for more than a year. Lives and careers have been upended, reimagined and remade. But with the Games scheduled to start in less than three months, the space to adapt has disappeared, and some virus-related obstacles are now likely to be insurmountable.

In March, eight fencers from six countries tested positive at a qualifying competition in Budapest, Hungary, where they were placed in quarantine and prohibited from competing. Early last month, a judo team from India had to withdraw from a qualifying competition in Kyrgyzstan after two athletes from the squad tested positive. And officials had to cancel the Pan-American canoe sprint Olympic qualifying event that was supposed to take place last month in Brazil, one of the world’s leading virus hot spots. The Olympic berths from the region are now likely to be determined by rankings and by performances from the 2019 world championships.

For athletes in each case, the lost training time, competition and opportunities to gain qualification points changed the calculus for the Tokyo Games. Some still do not know precisely how — or if — they will book their places in the Olympics, which are to begin July 23.

Eight competitors were barred from a fencing event in Hungary after testing positive for the coronavirus, but the tournament went ahead without them.Credit…Tibor Illyes/EPA, via Shutterstock

Olympic athletes have long dealt with the pressure to stay healthy and to avoid injuries during the crucial weeks and months leading up to the Games, which for many of them represent a once-in-a-lifetime opportunity. But with the complications of the coronavirus, unlike a muscle strain or a typical illness, powering through pain and fatigue is not a solution. For an infected athlete, and possibly for healthy athletes who are deemed close contacts, even a brush with the virus presents an insurmountable obstacle.

In certain sports, missing a single qualifying competition may not end an athlete’s hopes. In other disciplines, there are no second chances.

“Our primary concern is creating a safe environment where athletes can compete,” said Jonathan Finnoff, the chief medical officer for the United States Olympic and Paralympic Committee. “That means not having anyone entering with Covid-19, working to prevent any spread, and protecting the communities.”

Officials in the United States have drawn up elaborate protocols to make sure their competitions — including the largest trials, for high-profile sports like swimming and track and field, both of which are holding their qualifying meets in June — do not become superspreader events.

For now, American athletes competing in Olympic trials have to test negative for the coronavirus before traveling to their events, and then do so again upon arrival. The second test needs to be within 72 hours of their first official activities.

The United States track and field federation is going one step further during its 10-day trials; it will require testing every two days during the competition.

While forbidding someone to compete after a positive test is a simple matter, deciding to eliminate a person deemed to have been in close contact with an infected individual is more complicated. To be considered a close contact, an athlete has to have been close to an infected person for more than 15 minutes during a 24-hour period while that person was symptomatic, or during a 48-hour period before a positive test or the onset of symptoms.

It does not matter if the contact occurs outdoors or inside, which means that not only training sessions but also meals and car rides can be high-stakes interactions. A health officer appointed for the trials will decide when to bar a competitor. Athletes will have an opportunity to appeal to a broader panel.

However, athletes who have received vaccinations essentially have a get-out-of-jail-free card. The rules for close contacts follow the Centers for Disease Control and Prevention guidelines, which stipulate that a person who is two weeks past receiving both doses of a Pfizer or Moderna vaccine or a single dose of the Johnson & Johnson vaccine is not considered a close contact and does not have to quarantine.

Those rules differ from the ones currently in place for the Games this summer. Organizers in Japan announced Wednesday that athletes who are deemed close contacts will be evaluated on a case-by-case basis. The protocols that officials released did not mention how a completed vaccination series would affect the evaluation process, though athletes who have been vaccinated must follow the same rules as those who have not.

But Chapman, the track and field federation’s doctor, said that at recent meets he has been spreading the word to athletes that the vaccine can significantly reduce their risk of elimination during the trials. Olympic officials in the United States are hoping that serves as an inducement for any athletes currently harboring concerns about getting vaccinated.

“A majority of the ones I have spoken with say they have already gotten their first dose,” Chapman said.

Suriano said he did not get the chance. He is only 24 and, in Arizona, did not meet the standards that might have allowed him be vaccinated in time for the Olympic trials.

A labor studies major at Rutgers, where he also took classes in theater and art, Suriano said he followed health guidelines as closely as he could. He wore a mask regularly and tried to limit his contact with large groups, largely quarantining himself except when he was training. He traveled to Europe earlier this year and took first place in a meet in France that included the wrestler who won Suriano’s weight class at the United States Olympic trials.

He said he tested negative on the Sunday before the trials, then trained and traveled to Texas the next day. He tested positive that evening. A second test confirmed the result.

By the weekend, when his rivals were wrestling for places on the Olympic team, Suriano said he was experiencing symptoms of Covid-19. Once his health returned and doctors cleared him to travel, he returned to New Jersey.

He has not decided if he will try to qualify for the Paris Olympics in 2024. There is little money in wrestling, and there are no guarantees. He could get injured. A better wrestler might come along.

“It hurts and it alters you,” Suriano said of the experience. “I think there is a lot of beauty ahead. That is just what comes with pain.”