SAN FRANCISCO — On the day Lou Gehrig stood at a microphone at Yankee Stadium and, with a few simple words, inspired a nation with his courage and optimism, the disease that was slowly destroying his body had not yet done its worst.

Grappling with amyotrophic lateral sclerosis, a fatal disease for which there is no cure, and facing down a projected life span of two to five years, Gehrig defiantly called himself the luckiest man on the face of the earth, mostly for what was already behind him, not the quiet suffering that lay ahead.

Gehrig would succumb to A.L.S. within two years, at age 37, but the disease that informally bears his name remains, and the search for a cure and for effective treatments continues.

On Wednesday, Major League Baseball will celebrate the inaugural Lou Gehrig Day, designed both to honor the Iron Horse’s magnificent career and to help raise awareness and funding for the disease.

“Eighty-two years after Lou’s speech, patients are going home and doing the same things Lou did, trying off-label therapies, supplements, and vitamin E,” said Gwen Peterson, a gregarious 34-year-old A.L.S. patient advocate, who was diagnosed with the disease in 2018. “We are not much further along than Lou was. That is why this day is so important.” 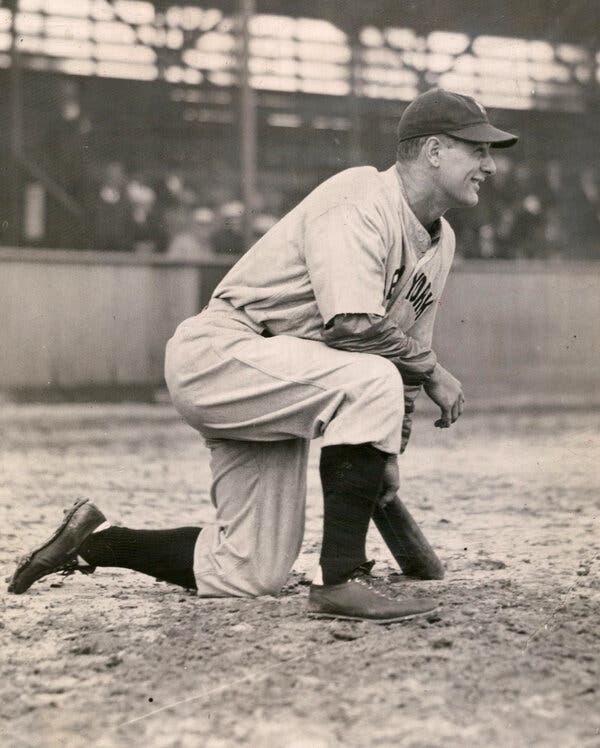 From 1925 to 1938, Lou Gehrig was one of the best and most durable players in baseball. His career abruptly ended in 1939 and he died of A.L.S. complications in 1941. Credit…The New York Times

Lou Gehrig Day will become the third annual event that M.L.B. uses to recognize the achievements of former players. The others honor Jackie Robinson and Roberto Clemente.

Peterson was part of a group of volunteers who helped conceive, organize and shape Lou Gehrig Day with M.L.B. She keeps a screen shot on her phone of a text message sent less than two years ago by her friend, the country singer Bryan Wayne Galentine, an A.L.S. sufferer who died in October. In the text, Galentine suggested M.L.B. should be approached about “doing something with Lou Gehrig like they’ve done with Jackie Robinson.”

Within two years, Galentine’s suggestion earned the M.L.B. stamp of approval. The event will be celebrated this year on the anniversary of the day Gehrig was penciled into the starting lineup for the first time as part of his then-record streak of 2,130 consecutive games played. It is also the day he died, in 1941.

“I’m really proud of my friends for putting this together,” Peterson said. “It all started with a text message from Bryan, and he would have been so happy to see it come true.”

For some players, the day has special meaning. Stephen Piscotty, an outfielder for the Oakland Athletics, lost his mother, Gretchen, to A.L.S. in 2018. He called the leaguewide event “a leap forward” in terms of awareness and fund-raising for a disease with an estimated 5,700-6,400 new diagnoses per year worldwide.

“To watch someone go through it is devastating because the suffering is relentless,” Piscotty said in a telephone interview. “Currently, there is no hope. But we want to change that.”

The Oakland Athletics bowed their heads in memory of Gretchen Piscotty, the mother of Athletics outfielder Stephen Piscotty, before a game in 2018. Gretchen died of A.L.S.Credit…Ben Margot/Associated Press

Although Peterson cannot attend the event at Yankee Stadium, her older brother Rob Farnen, a third baseman for Yale in the late 1990s, will attend on behalf of his younger sister and a close college friend named Jake Bliss, who died of A.L.S. in 2012. Farnen will be accompanied by his parents and Greg Janis, a physician who was an informal adviser and counselor to Peterson during her 18-month ordeal to find a diagnosis.

Peterson grew up in West Haven, Conn., the youngest of four in a family of mostly Red Sox fans. She moved to San Francisco in 2013 to take a job recruiting researchers at a university and soon met and fell in love with a director of tech analytics named Nathan Peterson. Soon after, she began to stumble and trip, an early symptom — one Gehrig also experienced — of a disease that attacks the body’s nerve cells and leads to complete paralysis.

Among the maddening aspects of Lou Gehrig’s Disease is that for most patients, the only diagnosis is to rule out all other possibilities. For a year and a half, Peterson heard no adequate answers. One doctor told her she had low blood pressure and that she was stressed over wedding planning. Peterson knew better.

Amid the growing concern, Gwen and Nate married in 2017. Less than a year later, doctors told her to get her affairs in order.

“The future is scary,” Nate said last month at the couple’s San Francisco apartment. “It’s hard to watch someone that you love go through this, and as hard as it feels now, it’s going to be worse.”

Peterson resigned from her job, signed up for Social Security benefits and Medicare and got legal status as disabled. But, if anything, she works even harder now as a member of I AM ALS, an advocacy group for patients, that has become her passion. She has also participated in 32 research studies, including a dozen active ones, and was selected to a committee that will appeal to the U.S. Food and Drug Administration to make treatments more accessible.

Nate and Gwen Peterson were married in 2017. “It’s hard to watch someone that you love go through this, and as hard as it feels now, it’s going to be worse,” Nate said.Credit…Anastasiia Sapon for The New York Times

She was accepted into an expanded access program for an experimental treatment that involves a highly invasive and painful procedure in which modified stem cells are injected into her spinal fluid. That treatment, at the very least, provides some hope beyond vitamins and supplements.

“This isn’t for the faint of heart, but I’m lucky to be on an experimental therapy,” Peterson said, echoing the same word Gehrig used in his speech. The Petersons also consider themselves lucky because Gwen’s muscular decline has been slower than it is for some. Even so, she requires a walker and her speech has slowed.

Because of her advocacy, Peterson was appointed to two advisory committees at the Healey Center for A.L.S. at Massachusetts General Hospital, a leading global research and treatment center combating the disease.

Merit Cudkowicz, a neurologist and the director of the Healey Center, called Lou Gehrig Day “transformational” in terms of how it will perpetually raise awareness and funding for the cause.

“It could be even bigger than the Ice Bucket Challenge,” she said, referring to the campaign that raised awareness and over $100 million for A.L.S. research by having people post videos on social media of ice water being dumped on their head. “It’s also an acknowledgment of all of the people who died from this disease.”

Dr. Cudkowicz treated Pete Frates, the former Boston College baseball player who helped promote the Ice Bucket Challenge before his death in 2019. She recognizes a similar courageous spirit in Peterson.

“She is such a powerful advocate,” Dr. Cudkowicz said of Peterson. “Her work is game changing. The advocacy by people with the disease and their families in the last couple of years has changed the dialogue with the F.D.A. and drug companies and scientific community. You wish they didn’t have to spend their time on that, but it’s had a big impact.”

Dr. Cudkowicz said that although there is still no cure and no drug proven to stop or reverse the disease, there have been breakthroughs in genetic research and possible treatments. But the public, she said, is mostly unaware of how debilitating the disease is.

The speech Lou Gehrig gave at his retirement ceremony on July 4, 1939 is one of the most famous moments in baseball history. His physical deterioration afterward was swift. Credit…Curtis Management Group/Sporting News, via Getty Images

Gehrig’s own history tends to focus on his ironman streak and his moving farewell speech, and less on his inevitable physical decline, which occurred away from the spotlight. In the book, Luckiest Man: The Life And Death of Lou Gehrig, author Jonathan Eig detailed new research showing how Gehrig, like virtually all A.L.S. patients, was forced to use a wheelchair, then to stay in bed, and eventually lost the ability to swallow and, eventually, to breathe.

Since publishing the book in 2005, Eig has been involved with A.L.S. advocacy and said most of the neurologists he has met feature a photograph of Gehrig on their wall. Many patients draw strength from Gehrig’s example, too, he said.

“Gehrig is a symbol of strength, not a symbol of disease,” Eig said. “It’s important for people to have someone like him to be associated with.”

Peterson is also inspired by Gehrig, and began researching his life soon after her diagnosis. She looks forward to celebrating his day, when she can. The San Francisco Giants are off on Wednesday, so they will celebrate on June 3. The Petersons plan to be there.

In the meantime, and afterward, Gwen will continue her unflagging work, with Nate by her side.

“Keep advocating,” she said. “I love the people I’ve met. I’ve got Nate, I’ve got my family and friends. But the people in this disease, there’s a different connection there. So, I’ll keep advocating and I’ll keep making friends.”

‘When You Hear the Heart, You Know It’s Your Motor’