Nine months ago, when the Islanders made it to the conference finals of the Stanley Cup playoffs for the first time in almost 30 years, Nassau Coliseum was dark, empty and silent.

The Islanders were playing the Tampa Bay Lightning, but the games were staged in a sequestered bubble in Edmonton, Alberta, where spectators were barred because of the coronavirus pandemic.

But on Thursday, things were largely back to normal at the arena where the Islanders have played the vast majority of their home games since their inception in 1972. Almost 13,000 boisterous fans, many adorned in the blue and orange jerseys of their favorite players, packed shoulder to shoulder into an old concrete barn to welcome their team back to an N.H.L. conference final — the first time in 28 years that Islander fans were able to witness that in person.

“It feels very much like everything is back the way it should be,” George Pignataro, a retired bank executive from nearby Massapequa, said before Game 3, once again against the Lightning, in Uniondale, the new epicenter of the lively return of sports to the greater New York area, after months of closures because of the pandemic.

Tampa Bay went on to win, 2-1, and grabbed a two games to one advantage in the Stanley Cup semifinal series. Game 4 is Saturday in what could be the last Islander home game ever at the Coliseum. Tampa Bay, the defending Stanley Cup champions, is 6-1 on the road in the playoffs and showed its mettle in weathering a charged reception.

“It was will that got us through it,” Lightning coach Jon Cooper said. “We’ll need to have that again if we’re going to come in here in Game 4 and do the same thing.” 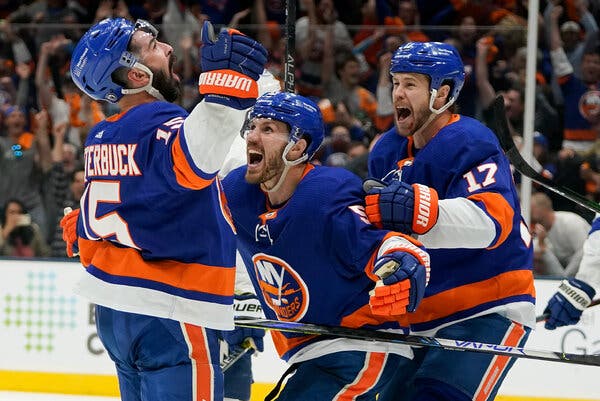 For Pignataro and his wife, Barbara, who were season ticket holders for 42 years, along with masses of passionate Islander fans, the game and the series represent a double reawakening. After months of isolation and lockdown, life is beginning a return to normal in the New York area, and sports teams have joined in by welcoming back fans by the thousands.

The Yankees and Mets have been playing to increasingly large crowds, with more than 16,000 at Citi Field on Thursday and more than 19,000 at Yankee Stadium for a game against the Red Sox earlier this month.

At Barclays Center, the brief home of the Islanders during an ill-conceived foray into Brooklyn beginning in 2015, the Nets played the Milwaukee Bucks in a critical Game 5 of their N.B.A. playoff series in front of 16,000 exuberant fans.

But the Nets are a relatively new phenomenon in Brooklyn (they moved there from New Jersey in 2012), and their roots have not dug into the fabric of the community as firmly as the Islanders have in Long Island for nearly half a century.

Even with 3,000 more fans at the Barclays Center than were at the Coliseum, it would be hard to fathom them making more noise than Islander fans hoping to relive old glory under the four championship banners that dangle from a low ceiling that intensifies the tumult below.

Since the return of fans into stadiums in the New York area, nothing has quite matched the intensity of what is happening in Uniondale.

“Islander fans are a different breed,” said Billy Jaffe, an analyst covering the series for the NHL Network. Jaffe also served as an analyst on Islanders broadcasts for five years a decade ago. “It’s just a unique, intense fan base, and they have been waiting for this for a long time.”

Similar to the Pignataros, Jaffe was referring to the duality of that wait. In the immediate sense, it has been about returning to the building to shout, chant, sing and bang on the glass together.

In the larger sense, it is about the re-emergence of top-flight hockey amid signs that it is sustainable under Lou Lamoriello, the president and general manager, and Barry Trotz, the head coach, both of whom won Stanley Cups elsewhere.

Jaffe said that the Islanders are one of the most respected teams around the N.H.L., and now that they are back on Long Island for good — they are expected to open their new arena in Elmont in the fall — the bond between team and the Long Island fans has been renewed.

“It feels like the Islanders fans have ownership of their team again,” Jaffe said. “It seems like they feel they are allowed to be invested again.”

As it was in the previous playoff series against the Boston Bruins, unmasked fans sang along to the national anthem so vociferously, and so in tune, that Nicole Raviv, the actual appointed singer, graciously put away her microphone and allowed the audience — after months of quiet seclusion — to thunder on, not that anyone could have heard her, anyway.

“It’s every bit as intense and loud as a big Premier League soccer game,” said Bruce Clouston, a 28-year-old corporate insurance executive from Australia, by way of Northumberland in the U.K. He moved to Brooklyn three years ago and became an Islanders fan. He went to two regular season games after the team opened the arena to fans on a limited basis on March 18.

The numbers have grown to almost full capacity, minus about 900 empty seats near the benches and where the teams enter the ice. Thursday’s crowd included the talk show host Jimmy Fallon, the actor Ralph Macchio and a host of Jets football players, who have joined in the festivities.

It was also Clouston’s sixth playoff game this year. When the Isles scored in the previous round, he hugged the unmasked strangers seated next to him. (A handful of ushers carried signs politely requesting fans to wear masks, but almost no one did.)

On Thursday, upon disembarking from the commuter train from Brooklyn, Clouston accepted a ride from a fan he had just met.

“That would never have happened a few months ago,” he said.

For virtually all of Game 3, Clouston and his fellow fans roared for their team. But in the final minute, as the Islanders skated backward while struggling to set up in the offensive zone, a number of fans grumbled and booed the perceived lack of urgency.

The Islanders have reawakened the passion of their fans, and everything that comes with it.