PARIS — Naomi Osaka, the No. 2 seed, did not play her second-round match at the French Open. Ashleigh Barty, the No. 1 seed, could not finish hers: She trudged to her chair in the second set on Thursday, leaving her racket behind, and then walked to the net to shake the hand of her opponent, Magda Linette.

“It’s disappointing to end like this,” said Barty, the matter-of-fact Australian who won the French Open in 2019. “I’ve had my fair share of tears this week.”

Barty’s comment on the setback was made at a post-match news conference, a virtual gathering in which she shared background on her left hip injury and her decision to stop the match when trailing by 1-6, 2-2. Osaka, who has recently revealed her bouts with depression and social anxiety, withdrew on Monday because of a dispute with tennis officials over participating in similar media duties.

Barty, 25, said her injury had occurred when she landed after a serve during a practice just before the start of the French Open.

“Completely new injury,” she said. “Something that I’ve never experienced before.”

Now Roland Garros is running low on top seeds. After just two rounds, eight of the top 16 women are out. But that does not mean this Grand Slam tournament has become a wide-open landscape of red clay and great opportunity for all.

Iga Swiatek, the defending champion, has yet to drop a set, just as she did not lose one — or even go to a tiebreaker — in the seven matches of her surprise run to the 2020 title. Last month, she won the Italian Open on clay, defeating the former No. 1 Karolina Pliskova, 6-0, 6-0, in the final.

Swiatek, a 20-year-old from Poland, has carried that momentum into Roland Garros, where she is seeded No. 8, and where she recorded another steamroller score line on Thursday, defeating Rebecca Peterson, 6-1, 6-1. To make matters more ominous for the rest of the women’s field, Swiatek practiced with Rafael Nadal for the first time last week.

On Thursday, which was his 35th birthday, Nadal also rumbled into the third round, defeating his longtime foil Richard Gasquet, 6-0, 7-5, 6-2. (At least during the first set, it was perhaps best for Gasquet, the only remaining French singles player, that spectators were not yet allowed to attend the new night sessions at Roland Garros.) 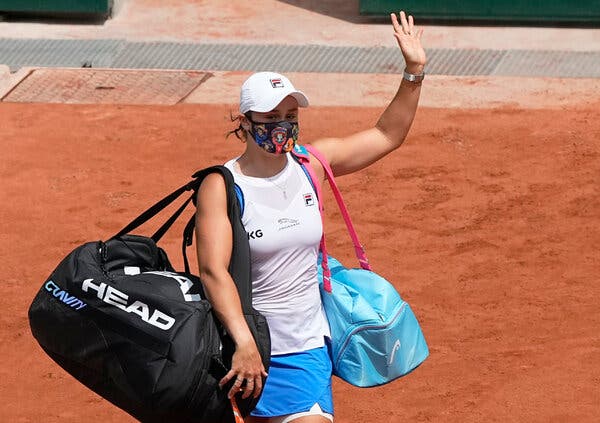 Ashleigh Barty, the top seed, waving goodbye after retiring from her second-round match because of a hip injury.Credit…Michel Euler/Associated Press

Swiatek has modeled more than her heavy topspin forehand after Nadal, a 13-time French Open champion. Like Nadal, she seems to grasp the importance of concentrating on the rally at hand instead of on the draw at large.

Her margins of victory are related not only to talent but also to her ability to focus, which is probably linked to her decision at an early age to prioritize mental preparation.

“Your mind can fly away,” she told me on Thursday when I asked about her score lines. “You have advantage for sure, but you have to always be aware that this can change.”

Swiatek comes across as a particularly thoughtful young athlete, even in a second language, and she is exceptionally powerful, too. It should require a special performance to stop her in Paris. Though Nos. 1 and 2 are gone, she is well aware that her next opponent, the No. 30 seed Annet Kontaveit, has won both their previous matches.

“We see that so many players can win a Grand Slam not having so much experience; I had that situation,” Swiatek told me. “I don’t care that many seeds have pulled out or already lost. I’m just focusing on my next round.”

The third round at Roland Garros has quite a lineup and quite an age range. Carlos Alcaraz, an 18-year-old Spaniard, became the youngest man to reach the third round of a Grand Slam since Nadal at the 2004 Australian Open. Coco Gauff, the 17-year-old American, reached the third round for the first time in Paris and will face Jennifer Brady in one of three upcoming all-American women’s matches. In the others, Sofia Kenin will face Jessica Pegula, and Serena Williams will play Danielle Collins.

Kenin, seeded fourth and a finalist here last year, has struggled this season but played better after arriving in Paris without a coach; she has ended her coaching relationship with her father, Alex. Pegula is having a breakout 2021.

Federer and Cilic have played on bigger occasions, with Federer prevailing in the 2017 Wimbledon final and the 2018 Australian Open final. But this second-round match had plenty of high-level shotmaking, as Cilic repeatedly hit thunderous groundstrokes into Federer’s backhand corner.

Federer generally held firm but uncharacteristically lost his patience when trailing by 1-3 in the second set, as he was called for a time violation while toweling off as Cilic prepared to serve at deuce. It is rare for returners to be hit with a time violation, and Federer, generally one of the game’s most expeditious players on his own serve, was indignant. He debated the decision for nearly three minutes in French with the chair umpire, Emmanuel Joseph.

“Are you listening to me or are you speaking?” Federer said at one stage. “I listened to you before. Now you can listen to me.”

The Grand Slam rule book says players shall play “to the reasonable pace of the server,” and though the rule is enforced inconsistently, Cilic was clearly irritated earlier in the set by Federer’s making him wait, knocking a serve that did not count in Federer’s direction.

Roland Garros spectators have an infamously low tolerance for players’ arguing with the umpire, but they also like Federer, so they cheered or stayed silent instead of booing.

During his debate with Joseph, Federer asked Cilic directly if he was playing too slowly, and Cilic reminded him of the rule. Federer returned to the baseline, lost the game and continued bantering with Joseph, saying he should have warned him there was a problem before issuing a code violation.

Joseph said he thought Federer had understood and could have gotten the message from Cilic’s behavior. “Try to think it through a bit, not just think,” Federer said before returning to the court and complaining that he no longer even “dared” to use his towel during return games.

It was all quite extraordinary, as was Federer’s decision to overrule Joseph and concede an ace to Cilic on the first point of the tiebreaker in the third set. To sum up: Federer, who has played so little since the pandemic rules on towel use were put into place, is still adjusting.

“I just feel like it was a misunderstanding on many levels,” he explained later at a news conference that provided useful context.

“I didn’t understand it and figure it out, and I guess I’m just new to the new tour,” he said, making air quotes with his fingers and chuckling as he said the word “new.”

A Brief Guide to Every Sport at the Olympics