SAN DIEGO — There were plenty of intriguing story lines, but little sizzle, in the opening half of the 2021 United States Open. Richard Bland of England, who qualified for the championship by winning his first European Tour event after 477 failed attempts, was tied for the lead with Russell Henley, a PGA Tour veteran whose last tournament victory was four years ago.

The spotlight of America’s national golf championship was desperately looking for a familiar face.

In the third round on Saturday at Torrey Pines Golf Course, the sport’s headliners finally stepped to the edge of the stage, an experienced, decorated crew that may forecast a star-powered and suspenseful finish to Sunday’s final round.

Henley finished the round at five under par overall and remained atop the leaderboard and was tied by another lesser-known player, Mackenzie Hughes of Canada. But with a thrilling 52-foot eagle putt on the 18th hole, Louis Oosthuizen, the 2010 British Open champion from South Africa, also vaulted into a tie for first. Moreover, Rory McIlroy, the five-time major champion, and Bryson DeChambeau, the defending U.S. Open champion, mustered charges that left them two strokes off the lead at three under.

Jon Rahm, a prominent pretournament favorite because of his stellar play in the last month, was at two under, as was the resurgent Matthew Wolff, last year’s runner-up in the event, and Scottie Scheffler, another promising young player with several recent top finishes. Not to be overlooked at just four strokes off the lead were last year’s Masters champion Dustin Johnson, who shot a 68 on Saturday, and Collin Morikawa, the winner of the 2020 P.G.A. Championship.

“Yeah, it was moving day, I guess,” McIlroy said afterward. “A lot of guys are playing well and getting in the fight. That’s what you have to do in the third round of a major.” 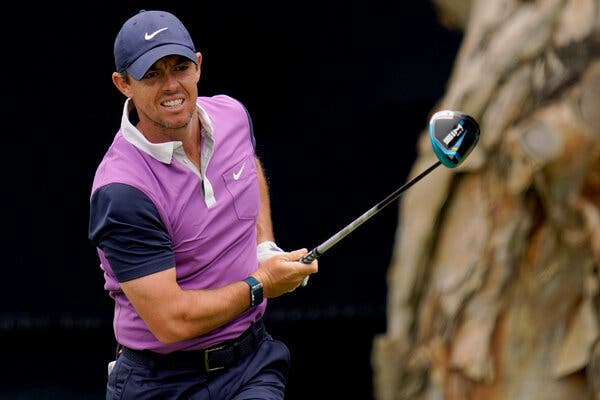 McIlroy played his shot from No. 7 on Saturday. He finished the round with a 67.Credit…Gregory Bull/Associated Press

McIlroy started slowly on Saturday but had four birdies and a bogey on his final nine to finish with a 67, which was six strokes better than his second-round performance. His late run started when he chipped in from 33 yards at the 12th hole, and it concluded with a nervy downhill two-putt from 62 feet at the par-5 18th hole.

Although McIlroy said the biggest shot of his back nine had been a 4-foot bogey putt at the 15th hole.

“This is the only tournament in the world where you fist-pump a bogey,” he said. “That putt was huge for momentum — to not give away two strokes.”

The superstitious McIlroy also said he was going to eat the same chicken sandwich he had had for the previous five dinners this week at Torrey Pines.

DeChambeau had the most error-free day among the leaders, shooting a 68 without making a bogey. DeChambeau’s round could have been better, as he pounded many drives roughly 340 yards. But his approach shots did not consistently find the greens. Still, DeChambeau overpowered the lengthy first and sixth holes to make birdies on each and took advantage of the par-5 13th hole for a third birdie.

Most encouraging for DeChambeau was his sharp short game, something he relied on during his victory at last year’s U.S. Open. As much as DeChambeau is known for how far he hits the golf ball, efficient play near the greens, and accurate putting, has usually been the best predictor of his success.

As has been the case for the past few weeks, DeChambeau on Saturday was also taunted by fans who shouted “Let’s go, Brooks-y” after many of his swings — a nod to the running feud with his colleague Brooks Koepka.

DeChambeau said afterward that he had learned to treat the shouts “as a compliment.”

DeChambeau prepared to putt on No. 15. He finished the day with a 68.Credit…Ezra Shaw/Getty Images

Koepka, who like DeChambeau began the day at even par, did not improve his position with three birdies and three bogeys for a 71.

Wolff had an erratic day and shot 73 with four bogeys, but after not playing competitively for the last two months, he was satisfied that he remained in the hunt for the championship.

“I was a hair off out there at times,” Wolff, 22, said. “But I felt like I grinded pretty good and kept the scores as low as possible to give myself a good chance going into tomorrow.”

Henley was one under par on his opening nine holes and held a two-shot lead on the field, an edge he kept when he lofted a shot from a right greenside bunker on the 11th hole and watched his ball bounce once and then disappear in the hole for a birdie.

But it was Henley’s last birdie in an even-par round of 71.

Hughes caught Henley with a blistering back nine, shooting a four-under 32. He will play in the final group on Sunday, paired with Oosthuizen.

“You get goose bumps thinking about it,” Hughes said Saturday evening of the matchup. “I know I’m going to be nervous tomorrow. But yeah, I’m going to try and enjoy it lots. You know, it’s where you want to be.”

Bland, after his stunning surge in Friday’s second round, seemed calm throughout his opening nine holes on Saturday with an uncomplicated swing that consistently set up par and birdie putts. But some of the magic of his putting stroke was missing. Bland had converted 31 of 31 putts inside 10 feet in the first two rounds. That streak ended on the fifth hole, when he missed an 8-foot par putt and made bogey.

Things got worse, with consecutive bogeys on the 11th and 12th holes. Bland then left a 7-foot par putt short on the 16th hole, and his 20-foot par putt on the 17th green slid past the right side of the hole. The par-5 18th hole brought a most ignominious ending when Bland’s third shot plunked into the pond fronting the green. That led to a third successive bogey as he finished with a 77 and was one over for the tournament.

“That’s the U.S. Open — some days it’s just going to beat you up all day,” Bland said shortly after his round. “And today was my day.”