The N.H.L. playoffs begin on Saturday the same way the 56-game regular season played out: the schedule featured entirely intradivisional play and the postseason will be no different through the first two rounds.

The four semifinalists will be seeded for the conference finals based on their records, and the two winners will play for the Stanley Cup.

Because of the divisional realignment to reduce travel during the pandemic, three of the four semifinalists could be teams that were previously in the same conference, producing what would have been an all-conference Cup final under the previous alignment.

Here’s what you need to know about each series:

All times are Eastern. 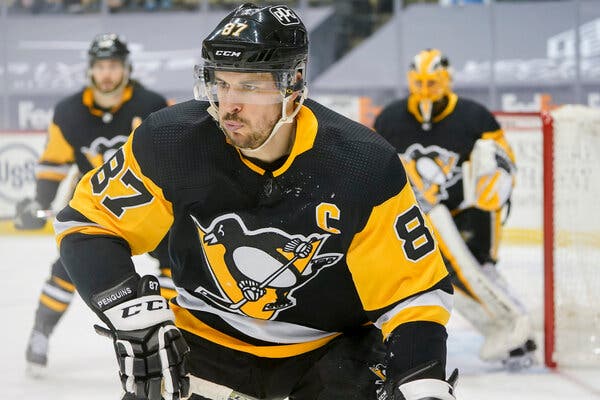 Sidney Crosby, who has won three Stanley Cups, led the Penguins to the top of the division.Credit…Keith Srakocic/Associated Press

No. 1 Pittsburgh Penguins vs No. 4 Islanders (Game 1: Sunday at noon, NBC)

Early in the season, Pittsburgh (37-16-3) was a middling team with an aging core. It shook up its front office in February, but there were few signs that the Penguins would win what was arguably the most competitive division in the league. Pittsburgh and Sidney Crosby, its captain, did just that.

The Penguins played through a spate of injuries that, at one point, had sidelined most of their top-nine forwards, the star center Evgeni Malkin missing six weeks. The trade deadline acquisition Jeff Carter had recorded 19 points in 40 games with the Los Angeles Kings, but since coming to Pittsburgh he has posted 11 points in 14 contests, including a four-goal performance this month against Buffalo.

The Islanders (32-17-7) have continued to play a methodical, steady and unflappable brand of hockey under Coach Barry Trotz. They last faced the Penguins in the postseason in 2019, Trotz’s first year behind their bench, when they swept Pittsburgh in the first round. This season, the Islanders had a winning record against five out of their seven East Division opponents, but struggled against the top teams, Pittsburgh (2-4-2) and Washington (2-5-1).

The Islanders acquired winger Kyle Palmieri and center Travis Zajac from the Devils near the trade deadline, helping shore up a frontline that was diminished by a season-ending injury to the team captain Anders Lee. Center Mathew Barzal paced the team offensively, leading with 45 points. Goalie Semyon Varlamov tied for the N.H.L. lead in shutouts and had the second best save percentage among goalies with at least 20 starts.

Perhaps the biggest story in this series will be the league’s largest player, Zdeno Chara, a 6-foot-9, 250-pound defenseman. Chara signed with Washington before the season, having spent the previous 14 campaigns as Boston’s captain, playing in three Stanley Cup finals and winning a title in 2011.

Washington (36-15-5) has now qualified for 13 of the past 14 postseasons. Nearly every key player was absent for one reason or another down the stretch, yet Washington still won 11 of its last 16 games.

Boston relies on its “perfection line” of Patrice Bergeron, Brad Marchand (who led the division in goals and points) and David Pastrnak. Goalie Tuukka Rask won seven of his final eight decisions and the rookie Jeremy Swayman emerged as a solid contingency plan with a 1.50 goals-against average in limited duty.

These two fabled franchises have won the most Stanley Cups in hockey history —Montreal has 24 (23 as a member of the N.H.L.) and Toronto has 13 — and will playing each other in the postseason for the first time since 1979.

Toronto (35-13-7) had created the widest gap in the standings between a division winner and the runner-up, ranking five points ahead of Edmonton as each team still had one regular-season game remaining entering Friday. The Leafs were sixth in goals-per-game, but improved defensively from allowing the seventh most goals last season to 26th this year.

That is not all that Toronto hopes to change. The Leafs have the longest title drought, having not won the Cup since 1966-67, the final season with just six teams. They have not returned to the finals since then and have not won a playoff series since 2004. This season, a group of explosive scorers led by Auston Matthews, whose 41 goals topped the N.H.L. has been enriched by complimentary players added between the past two trade deadlines. Goalie Jack Campbell set an N.H.L. record by winning his first 11 starts this season, and buoyed Toronto in the absence of Frederik Andersen, who returned from injury on Wednesday after missing 23 games.

Montreal won the Cup in 1993, the last championship for a Canadian franchise. They upset Pittsburgh in last season’s qualifying round in a No. 5 vs No. 12 matchup, and built on that success this season with boosts from a new acquisition, wing Tyler Toffoli, and a mainstay, defenseman Jeff Petry, who finished first and second in scoring on the team.

Oilers center Connor McDavid had 18 points in nine games against the Jets this season.Credit…Fred Greenslade/The Canadian Press, via Associated Press

Ahead of the Oilers’ final regular season game on Saturday against Vancouver, McDavid had scored 104 points, 21 more than the second-place Draisaitl, who is first in plus-minus rating ahead of his teammate, defenseman Darnell Nurse. Unsurprisingly, the Oilers have the most efficient power play of 2021, in terms of both conversion rate and net power-play percentage.

Winnipeg (29-23-3) was 7-10-1 in its final 18 games entering its finale against Toronto on Friday, backing into the playoffs and ceding home ice to Edmonton in this series. Nonetheless, they feature some intriguing elements, beginning with goalie Connor Hellebuyck, who faced more shots and played more than any other goalie this season. The Jets have long been known for their scoring prowess, though they dealt the 40-goal scorer Patrik Laine to Columbus for the two-way center Pierre Luc-Dubois in a reconfiguration of their core. Winnipeg lost seven of nine games to Edmonton this season, all in regulation, including the past six meetings.

Hurricanes forward Sebastian Aho will be a persistent scoring threat against the Predators.Credit…Mark Zaleski/Associated Press

After nine consecutive nonplayoff seasons, the Hurricanes (36-12-8), led by Coach Rod Brind’Amour, have made each of the past three postseasons, including a run to the conference finals in 2019. With a division title under its belt, Carolina will seek to return to the finals for the first time since 2006, when it won the title with Brind’Amour as captain.

As a coach, his teams have been tenacious and swift, best exemplified by the top center and leading scorer Sebastian Aho. Carolina’s deep, mobile back end is led by Dougie Hamilton, and has effectively supported veteran goalie Petr Mrazek and younger netminder Alex Nedeljkovic, both of whom posted lean numbers this season. Carolina was also the best all-around performer on special teams, with its second-ranked power play and third-rated penalty kill.

Nashville (31-23-2) won four of its final five games to fend off a challenge from the 2020 runner-up Dallas Stars for the final playoff spot. The Predators are an experienced group, with several key players remaining from the team that went to the 2017 finals. Roman Josi is the reigning Norris Trophy winner as the league’s top defenseman, and he led the Predators in scoring for a second straight season. Goalie Juuse Saros took the reins from Pekka Rinne, the Predators’ career leader in every goalie stat, and accumulated some impressive numbers of his own. He finished with the third-best save percentage, .927, among goalies with 25 or more starts, and he had six performances with 40 or more saves, more than any other netminder.

The Panthers won their final six games of the regular season, including two against the Lightning.Credit…Lynne Sladky/Associated Press

For the first time, these Sunshine State squads will square off in the postseason. If the temperature is just now rising in this rivalry, that’s because the Panthers (37-14-5) have not won a playoff series since they went to the finals in 1996. Though the Lightning (36-17-3) are the defending champions, slight betting favorites and the more accomplished franchise, the Panthers enter the series with home-ice advantage and more momentum from the stretch run as winners of six straight games and 10 of their last 12.

Florida Coach Joel Quenneville won three Stanley Cups with Chicago and has gotten the most out of a Panthers team that features unsung stars like center Aleksander Barkov and wing Jonathan Huberdeau. But one key player will be missing, as defenseman Aaron Ekblad broke his leg in March.

Beyond the Stanley Cup, Tampa has hardware with several past award winners. Goalie Andrei Vasilevskiy is favored to win his second Vezina Trophy and Victor Hedman his second Norris. However, the team has dealt with a number of injuries: Nikita Kucherov, the 2019 most valuable player, has missed the entire season with a hip injury, and Steven Stamkos, a two-time goal-scoring leader, has been out for more than a month with a lower-body injury. Both are expected to be available for Game 1.

The Avalanche won five of their eight regular-season games against the Blues.Credit…Jeff Roberson/Associated Press

The Avalanche’s superlatives were many. Colorado (39-13-4) won the Presidents’ Trophy with the league’s best record. Nathan MacKinnon and Mikko Rantanen finished first and second in scoring in the division. Philipp Grubauer produced numbers similar to those of Vasilevskiy. Cale Makar was among the league’s most dangerous defensemen offensively, ranking sixth in the position in points.

St. Louis (27-20-9) has seen plenty of turnover from its 2019 roster that won the first Stanley Cup in franchise history. The Blues lost their top defenseman and captain Alex Pietrangelo in free agency before the season and persevered through a multitude of injuries to secure the fourth seed in the top-heavy West.

They have been paced by their top center and new captain, Ryan O’Reilly, who led the team in scoring and was a +26 on a roster where no other player was even close.

Minnesota’s Kirill Kaprizov had 51 points in 55 games, including a goal on May 5 against Vegas.Credit…Andy Clayton-King/Associated Press

Vegas (40-14-2) finished second in their division but with the same amount of points as Colorado, and may be the most adaptive team in the field. Like Tampa, the Golden Knights can play a speedy, end-to-end game, or they can grind with more physical teams. They were also the league’s most effective penalty killers.

Few could have predicted that the Wild (35-16-5) would have been among the top teams.

Kirill Kaprizov, the rookie of the year front-runner, led the team in goals and points, setting franchise rookie records in both categories despite the abbreviated season. Center Joel Eriksson-Ek and winger Jordan Greenway established themselves as strong physical presences, exacting tolls on teams with their effective cycle and intense forecheck. Jared Spurgeon continued to drive the Wild’s deep defense corps, while the free agent signing Cam Talbot and the rookie Kaapo Kahkonen strengthened their situation in goal.

The War of the Weary