Baron Davis has long been a showman. During his N.B.A. career, which lasted from 1999 to 2012, Davis was known as one of the flashiest stars in the league. His best-known play was a 2007 playoff dunk for the Golden State Warriors on the Utah Jazz’s Andrei Kirilenko, which was so instantly memorable that Davis didn’t bother arguing the technical foul he received for celebrating too vociferously. That has long been Davis: an over-the-top talent ready to entertain at a moment’s notice.

So it makes sense that Davis has long had a foothold in film and television. His interest in movies dates to his time at the private Southern California school Crossroads, which he attended on scholarship and which is known for educating many children of the Hollywood elite. There, Davis befriended future stars like Kate Hudson and became interested in performing.

Davis formed his first production company in 2005, as he was entering the prime of his career. A move like this doesn’t surprise anyone now: several top stars, like LeBron James and Kevin Durant, have begun building entertainment empires. But in Davis’s day, it was rare. Since then, he has accrued dozens of credits, from producing the 2008 documentary “Crips and Bloods: Made in America” to voicing a part in “The Jungle Book 2.” 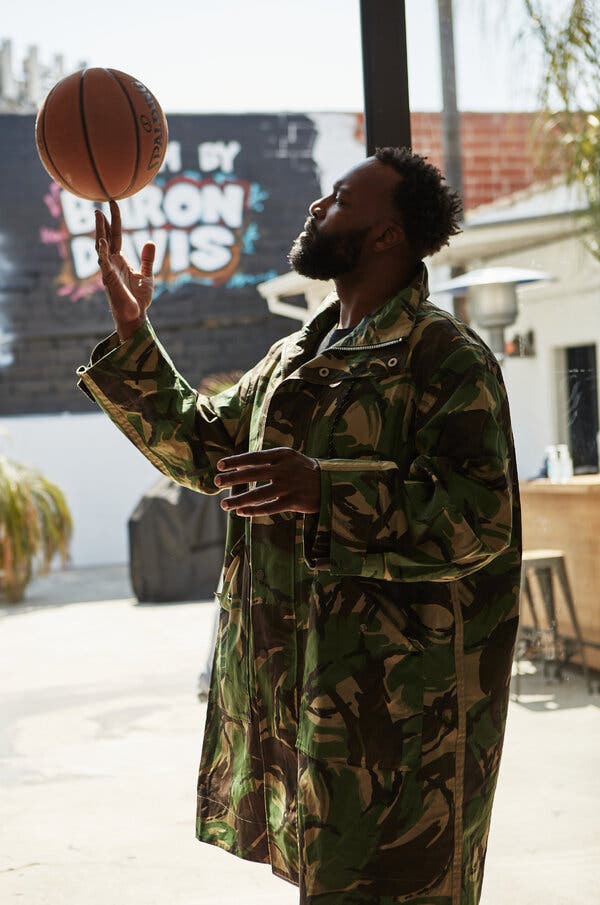 In addition to studying books on directing, Davis spent time with Spike Lee and other filmmakers while making commercials, and came away thinking, “Yo, you know what? I can do this.”Credit…G L Askew II for The New York Times

Now, Davis is taking his most audacious leap yet, making his directorial debut with a film he also co-wrote, “Domino: Battle of the Bones,” featuring Snoop Dogg, David Arquette and a cameo from the filmmaker.

The movie, opening Friday, tracks a Black competitive domino player’s relationship with his white step-grandson. It’s in your face and doesn’t take itself seriously. In other words, it’s a Baron Davis film. He said the movie was inspired by his love of Christopher Guest, known for mockumentaries like “Best in Show.” Although “Domino” isn’t a mockumentary, it is a satire.

In a recent Zoom interview, Davis discussed his directing debut, his idea for “Space Jam 3,” and a story he made up that fooled everyone but Hudson. Here are edited excerpts from the conversation.

If I was in your living room and I opened up your TV and saw your three most recently watched films, what would they be?

It would be “Harlem Nights.” It would be “He Got Game.” What else? Damn, dude, that’s a good question. “Blacula” or “Coming to America.”

Give me an example of something you did that was creative when you were young that had nothing to do with sports.

I told everybody I had a kid when I was 13 years old.

Why did you do that?

Because I was good at making up stories. I was bored, and the only person who called me out was Kate Hudson. Somebody was just bothering me, and I was just like, “Dude, I ain’t got time, dude. I got a kid, I got to work on my kid.” And he was like, “You got a kid?” So I went into this whole story about having a kid when I was 13 years old. And then, I had a story that I had a twin brother who got hit by an ice cream truck, and Kate called me out for that. She was the person who would always tell people, “Yeah, he’s lying. He’s just making up these stories.”

Tell me how this film came about.

I’m a huge Christopher Guest fan and, obviously, a “Friday” fan, and I love dominoes. And I was like, “Yo, it would be so dope to do a Black version, my voice with that Christopher Guest style,” and that’s how it came about with “Domino.” I remember earlier pitching it to F. Gary Gray and Dr. Dre. People don’t know this, but Dr. Dre had a real instrumental role in helping me to develop this.

How did you learn to direct?

I’ve read directing books, took directing classes. And, when I was in the N.B.A., anytime there’s a commercial I had to do or being on set, I’m really trying to see what the director is doing. I’ve been on set with Spike Lee. It was just fascinating to see how people work, talk to different directors, and I was just like, “Yo, you know what? I can do this.”

What goes into directing?

Was there any point in the process where you were like, “Oh, this is way harder than I thought it was going to be”?

Yeah, I would say Day 1. Because you just don’t have the time. You have to make real decisions in real time and get results.

What kind of director were you? Were you giving a lot of notes?

I would say I’m pretty cool. I’m an actor’s director, I like working with the actors, just hanging out with them, talking. But as far as the set, I’m pretty laid back. I know what I want, but also I have a commanding voice, right? So if I need to focus or there needs to be a pivot or something like that, I’m not afraid to do that.

My co-directors, I put them in a headlock if we had any disputes.

Where did your love for dominoes come from?

I think it’s just growing up in the neighborhood [in Compton, Calif.], watching the older dudes play, watching the Lakers play. It was the Lakers, Celtics, dominoes, barbecue outside. That was the energy and the environment. So after the Laker game, you go play basketball, you come back, they’re still playing dominoes till the night.

You’re also building up quite the acting résumé.

I’m taking acting lessons, just sharpening my craft. I think the next thing I do want to do, as an actor, is a drama. Like a kind of deep drama, basketball drama. And I probably want to play a character that’s funny.

Can you cry on cue?

Absolutely. There’s a lot of pain in here. I just think about my first high school girlfriend.

If and when there’s a “Space Jam 3,” are you going to throw your hat in to direct?

The return to what?

Nearth. I actually wrote a comic for LeBron James, because I wanted him to do something different than “Space Jam.” Then I pitched it to Steph Curry.

How do you spell that?

N-E-A-R-T-H, inner earth. So my pitch was, instead of going to space — I like creating worlds, so I created this world called Nearth where Nearthians exist, and they protect against pollution, things like that. And basically LeBron, Steph, all the major stars, they’d go down to Nearth and realize that we’re ruining our planet. [James and Curry declined Davis’s pitch.]