The debris came soaring out of the stands — beer cans, water bottles, towels, a couple of baseball caps, two gray shoes and a pair of glasses, whatever was handy.

It was the kind of unruly display normally seen from angry fans lashing out over a bad call by a referee or an opponent’s cheap shot. But this was not about malice or discontent.

The cascade of litter was actually a gleeful celebration of one of the biggest victories the New York Islanders have had at Nassau Coliseum in decades, and possibly the last one, too.

Anthony Beauvillier’s wrist shot past goalie Andrei Vasilevskiy, just one minute and eight seconds into overtime, gave the Islanders a dramatic 3-2 victory against the Tampa Bay Lightning in Game 6 of their Stanley Cup semifinal Wednesday, and let loose an unusual and potentially dangerous fusillade of joy.

“It feels amazing to be honest,” Beauvillier said. “That building, coming into work tonight, was smelling like cigarettes and now it smells like beers.”

It has been decades, though, since it smelled like champagne. The Islanders have not been to the Stanley Cup finals since they lost to the Edmonton Oilers in 1984 (the year after their fourth consecutive championship). But they will earn a spot there again if they can beat the Lightning in Game 7 on Friday.

It is the game the Islanders had hoped to play last year against the Lightning, but they were thwarted in that Game 6, also in overtime, and the Lightning went on to win the Stanley Cup against the Dallas Stars.

“We don’t look back, we just look forward,” said Barry Trotz, the Islanders coach, “and we look forward to the opportunity of a Game 7, now.”

That seemed unlikely for much of the night after the Lightning grabbed a 2-0 lead in the second period and furthered their recent domination in the series. Those goals, by Brayden Point and Anthony Cirelli, gave Tampa 12 straight goals against the Islanders going back to the third period of Game 4, and it included an 8-0 stampede in Game 5 in Florida.

But in another compelling game in a fascinating series, Jordan Eberle scored late in the second period to bring the arena back to life. Scott Mayfield tied it midway through the third when he took a nifty pass from Matt Barzal and lifted the puck over Vasilevskiy’s left shoulder. It pinged the crossbar and dropped in and the fans erupted. 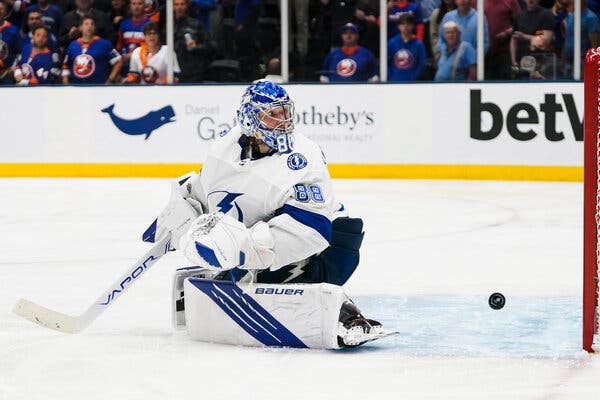 In overtime, Beauvillier, who had not scored in his 10 previous playoff games, stole a careless pass from Blake Coleman from the corner to Vasilevskiy’s left. Beauvillier gained control after a quick flip of the stick, fired it into the net and then slid on his knees to the side boards where he was mobbed by his teammates. Then came the barrage of bottles, caps and shoes.

“That place was going crazy,” Beauvillier said. “Everyone is happy we are going back to Tampa.”

Well, everyone but Tampa and their fans, that is.

To make matters worse for the Lightning, the team could be without its top scorer, Nikita Kucherov, who played only one shift in the first period before leaving the ice for good with an undisclosed injury. Kucherov had crashed into the boards while trying to hit Barzal, and on the next stoppage of play, he staggered off the ice.

It could be a significant blow to Tampa’s hopes of repeating as champions. Kucherov is leading all scorers in the playoffs with 27 points, a total of 5 goals and 22 assists.

“There’s no replacing Kuch,” said Steven Stamkos, the Lightning captain. “He’s had an unbelievable playoffs for us.”

He was terrific last year, too, when he had 7 goals and 27 assists in the Lightning’s Stanley Cup-winning run. But he recently revealed that he strained a groin muscle in the first game of that playoff run and the pain eventually migrated to his hip, requiring surgery on Dec. 29. He missed the entire regular season, 56 games, but joined the Lightning in time for the first playoff game.

Jon Cooper, the Lightning coach, did not indicate whether Kucherov would be available for Game 7, but sounded as if he were prepared to make alternate plans.

“We played 56 games without him,” Cooper said. “Usually, we have 12 forwards when we play without him, so that probably made it tougher on us when we had 11. But we’ve gone down this path for four months. It’s nothing new for us.”

For the Islanders, the victory means that Nassau Coliseum could host more Islander games after all. The team, which has been playing in the old concrete bunker since 1972, will move into a swanky new arena in Elmont next season, but if they win on Friday, they will play on in their ancestral home.

But if they lose Game 7, the final scenes of Islander hockey at the Coliseum will be of beer cans hurtling onto the ice while the players below celebrated a dramatic win. Trotz, who was the coach of the Washington Capitals when they won the Stanley Cup in 2018, has been coaching in the N.H.L. for 22 years.

He said Wednesday’s win ranked up there with some of the best for a variety of reasons, including the win-or-die situation, his affection for this team, the fans and even for the arena with all of its history as host to decades of Islander teams with Hall of Fame players and four championship banners.

“These are great moments,” Trotz said. “Coming off the ice and everybody is hugging each other and there’s beer cans flying all over. It was quite a sight and it was a moment that you will remember.”

Then he remembered the only way to get the Islander fans back in those seats.

“We’ve got to get another one,” he said.