Four days before Saul Álvarez and Billy Joe Saunders were scheduled to meet in a high-stakes boxing match at AT&T Stadium in Arlington, Texas, organizers were giddy over the ticket sales projections for their super-middleweight title fight on Saturday night.

Eddie Hearn, the promoter and the head of Matchroom Boxing, said the matchup — between Álvarez, a 30-year-old from Mexico nicknamed Canelo who holds the W.B.C. and W.B.A. titles at 168 pounds, and Saunders, the undefeated W.B.O. champion from England — was expected to yield a sellout of 70,000 tickets.

That figure, Hearn said, would be a record for an indoor boxing match in the United States, surpassing the 63,350 spectators at the Superdome in New Orleans for a Muhammad Ali-Leon Spinks fight in 1978. The attendance would also be the latest sign of a general opening up of large events in the country as pandemic-related restrictions have eased, allowing substantial crowds for the N.F.L. draft and the Kentucky Derby, as well as the expansion of capacities at baseball and basketball games.

“This is boxing. Saturday night, the world will be watching,” Hearn said. “It’s so encouraging.”

But Saunders nearly derailed the event on Wednesday when he threatened to walk away over the size of the ring. The fighters had agreed on a ring size that is fairly standard — 20 feet by 20 feet. But Saunders demanded a bigger ring — 22 feet on each side — and issued an ultimatum to Álvarez’s camp. Saunders instructed Hearn to fly him back to England if Álvarez refused, and for a few tense hours, fight fans worried the bout might be off. 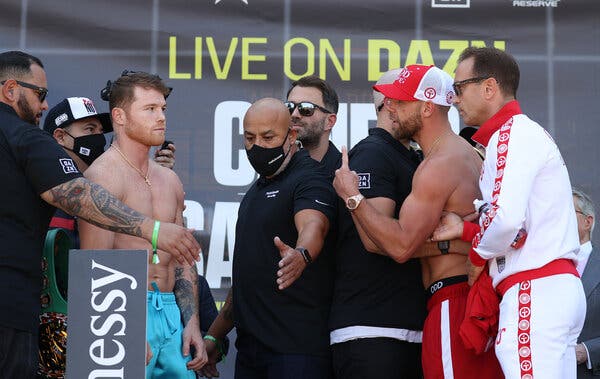 Canelo Álvarez and Billy Joe Saunders during their weigh-in at AT&T Stadium on Friday.Credit…Al Bello/Getty Images

Álvarez agreed to the expanded ring, even though it figured to favor Saunders, an elusive boxer who needs room to operate. .

Only boxing could serve up that type of last-minute plot twist. Imagine the N.F.L. letting teams negotiate the size of the field, or the Red Sox refusing to play the Yankees unless they agreed to shorten the game to six innings. This flirtation with self-sabotage, just days before the biggest fight so far this year, suggested that the boxing industry was easing back into prepandemic habits.

The sport was pressing forward amid its usual long-term uncertainty, while Álvarez prepared to face Saunders in a clash of world champions with a combined record of 85-1-2.

“I’ve been in a lot of important fights. This is another day at the office,” Álvarez said at a prefight news conference. “I always go 100 percent. Boxing is my life. I’m here to win.”

In 2018, Golden Boy Promotions, which represented Álvarez, signed a $365 million contract with DAZN, the streaming service carrying Saturday’s fight. The deal depended on Álvarez’s drawing power and guaranteed11 Álvarez bouts. Then his relationship with Golden Boy dissolved in a flurry of lawsuits, but he and his built-in audience remained with DAZN. Outside the heavyweight division, Álvarez is the biggest single draw in competitive boxing.

That distinction is important while the sport rides out a wave of attention-grabbing novelty fights. A November exhibition between Roy Jones Jr. and Mike Tyson (combined age: 105) spawned negotiations for more such bouts, including ones pittingJones against Joe Calzaghe and the 63-year-old Thomas Hearns and a possible rematch between Tyson and Lennox Lewis.

Then there’s Jake Paul, the YouTube personality-turned-boxer who parlayed a knockout of a retired basketball player, Nate Robinson, on the Tyson-Jones undercard into a pay-per-view windfall for a boutagainst a retired mixed martial arts fighter, Ben Askren. On Thursday afternoon, Paul received more attention after he and Floyd Mayweather Jr. traded insults and shoves at an event hyping Mayweather’s June 6 exhibition against Paul’s brother, Logan.

Fans of Canelo Álvarez at the weigh-in Friday in Arlington, Texas.Credit…Al Bello/Getty Images

Those events might not captivate the avid boxing fans who plan a Saturday night around Álvarez and Saunders, but they attract the broad audiences that turn title fights into big mainstream events. Hearn acknowledges that boxing’s stakeholders will need to plan countermoves.

“If the fight game doesn’t step up and make great fights, we’ll get overtaken,” he said.

Saunders’s prefight gambit aside, Saturday’s bout is the opposite of a novelty. Saunders, 31, is a hard-to-hit southpaw who has won all 30 of his pro fights. He moved up to the 168-pound weight class in 2019, has defended his title twice, and has said he will not be satisfied to simply share the ring with Álvarez.

“I don’t think we’ve had anybody come to win for a very, very long time,” Saunders said, referring to Álvarez’s recent opponents. “We’ve had a lot of people turn up, fly in, collect checks and fly out. But we haven’t had the heart and soul and I.Q. that I will bring to the table.”

The last time Álvarez faced a fighter as committed to movement and defense as Saunders is, he lost. That was in 2013, when he faced Mayweather. Since then, Álvarez has collected 14 victories and briefly moved up to the light-heavyweight division, where he knocked out Sergey Kovalev for a world title.

“He’s a great fighter,” Álvarez said of Saunders at a news conference on Thursday. “But I’m not the same fighter I was six or seven years ago.”

Álvarez remains a key component of DAZN’s plan to expand its presence in the United States. In other countries, the streaming service has rights for events like N.F.L. games, Premier League soccer and international rugby. But in the United States it has positioned itself as a boxing-first platform, putting it in competition with the premium cable outlet Showtime and the streaming service FITE TV.

The matchup between Álvarez and Saunders was expected to yield a sellout of 70,000 tickets.Credit…Al Bello/Getty Images

DAZN has deals with Álvarez and the middleweight champion Gennady Golovkin, who fought Álvarez to a draw in 2017 and lost a close decision to him the following year. Joe Markowski, the company’s executive vice president, has been explicit about DAZN’s desire for a third fight between them. But Golovkin would almost certainly have to add weight and move up to Álvarez’s division, and he recently turned 39, raising questions about how long he can compete at the most elite level. Álvarez maintains that if he beats Saunders he would rather fight the American super-middleweight Caleb Plant than face Golovkin again.

“What we respect about Canelo is his pursuit of greatness,” Markowski said, referring to Álvarez’s aspiration to unify the 168-pound title. “If he beats Saunders, the last piece of that puzzle is Caleb Plant. But the Golovkin fight holds a special place in the hearts of boxing fans.”

Plant, the International Boxing Federation champion, is signed with Al Haymon’s Premier Boxing Champions, which has partnerships with Fox and Showtime. Working out a deal between him and Álvarez would mean more wrangling over purse splits, promotional rights and broadcast platforms, which in turn could lead to typical boxing chaos. Last month, the heavyweight champions Anthony Joshua and Tyson Fury reportedly had a $150 million deal for a fight in Saudi Arabia. Then, suddenly, they didn’t.

Saturday’s bout will happen, but nothing beyond Álvarez-Saunders is guaranteed. Boxing fans recognize that uncertainty. For them, it’s a sign the sport is back to normal.