This month’s all-English Champions League final between Manchester City and Chelsea will be played in Porto, Portugal, a shift of one of soccer’s showcase events to one of few countries where Britons can travel without restrictions related to the coronavirus pandemic.

European soccer’s governing body, UEFA, cleared the last hurdles to shifting the game from its scheduled site in Turkey on Wednesday. An announcement of the move is set for Thursday.

The decision to move the final from Istanbul, which recently re-entered a virus-related lockdown, came after discussions between European soccer leaders and British government officials, who had been seeking to bring the game to London. When the sides failed to reach an agreement that would have allowed the teams and their domestic fans to avoid international travel, Portugal was chosen as the site of the game for the second year in a row.

The final, which will be played May 29 at the Estádio Dragão in the coastal city of Porto, is the biggest day on the European club soccer calendar. It had been scheduled to be played at the Ataturk Olympic Stadium in Istanbul, but that would have ruled out attendance for most British fans of the finalists, since Turkey is on a so-called red list of countries to which travel is discouraged.

Holding the game in Turkey also raised the prospect that players and officials from both teams would have to quarantine for as long as 10 days upon their return to England. That would have complicated the preparations of a handful national teams for this summer’s European Championship, which begins June 11. 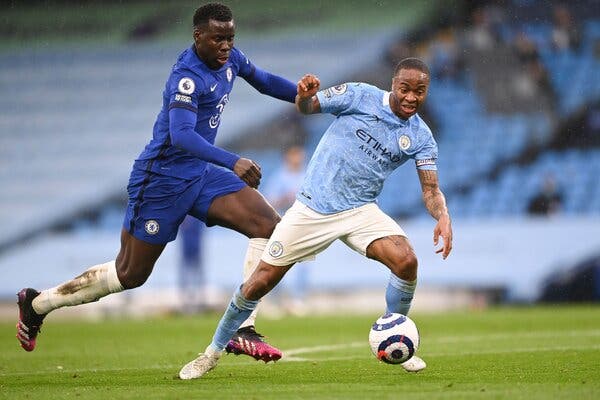 Chelsea beat Manchester City, 2-1, in a Premier League match on Saturday. The teams will meet again in the Champions League final on May 29.Credit…Pool photo by Laurence Griffiths

Europe’s governing body, UEFA, and British officials began holding direct talks on Monday, three days after the British government placed Turkey on its red list of countries, destinations where all but essential travel is prohibited.

The British government said it was open to holding the at Wembley Stadium in London, and even was prepared to agree to allow thousands of fans to attend, but they acknowledged that UEFA, as the tournament organizer, would have the final say. UEFA provided a list of key requirements, mainly around exemptions to quarantine rules for visitors.

UEFA’s demands created a problem for British officials, though, since they had to balance the popular appeal of bringing a major sporting event featuring two English teams to the country against continuing concerns about public health amid a spreading virus. When the government balked at UEFA’s request that it waive quarantine requirements so UEFA’s staff members — as well as international broadcasters, sponsors, suppliers and officials — could attend the game without an isolation period, the prospect of a London final was dead.

In Portugal, the European soccer body has found a familiar savior to get it out of a crisis. The country — and Lisbon in particular — rode to the rescue last year when the Champions League’s final stages, including a final also set for Istanbul, had to be reorganized because of the outbreak of the pandemic.

The tournament, suspended on the eve of the quarterfinals, was completed with a knockout format and in a so-called bubble environment in Lisbon. Turkish officials had agreed to surrender their role as host of the final in exchange for a promise that Istanbul would host the final this year.

Discussions about a move were completed quickly. Last Friday, after City and Chelsea had confirmed the all-English final and as talk swirled about a change of venue, Tiago Craveiro, the chief executive of the Portuguese soccer federation, reached out to UEFA. Officials at the soccer body were then reeling from that day’s sudden announcement that travelers from Britain faced severe restrictions for any travel to Turkey. That created a crisis that went well beyond questions about fan access.

Players on both sides faced the prospect of having to isolate for 10 days upon their return to Britain, creating doubts over their participation in the European Championship, the national team competition organized by UEFA that is second in size and importance only to the FIFA World Cup.

With Portugal on Britain’s green list — and thus subject to far less stringent travel rules — Craveiro offered to organize the final at short notice. Porto was picked because it did not get an opportunity to stage Champions League games last year when the event was confined in its Lisbon bubble.

Sympathetic that Istanbul is losing out for the second straight year, UEFA officials are considering offering Turkish officials the Champions League final in 2023, to coincide with the centenary of the Turkish republic.

Four Major Tournaments in Four Months Is a Lot of Important...