PARIS — It was the first Grand Slam singles quarterfinal for Coco Gauff and Barbora Krejcikova and, frankly, you could tell.

There were tight groundstrokes into the net, errant service tosses and multiple double faults, reversals of momentum and fortune.

To sum up, there was tension in the sunlight as fans — remember those? — shouted “Allez Coco!” from high in the stands in the Philippe Chatrier stadium.

Gauff, the American 17-year-old, received the majority of the support, but she could not quite manage to give the Roland Garros public what it desired. After failing to convert five set points in the opening set, she went on to lose to the unseeded Krejcikova, 7-6 (6), 6-3.

Gauff, the last American left in singles, finished with 25 winners, 41 unforced errors and one mangled racket after destroying it in anger with three swift blows to the red clay after double-faulting to fall behind by 4-0 in the final set.

“I’m obviously disappointed that I wasn’t able to close out the first set,” Gauff said. “To be honest, it’s in the past, it already happened. After the match, Enzo, my hitting partner, told me this match will probably make me a champion in the future. I really do believe that.”

Gauff was brilliant at times and bamboozled at others. She lost 15 straight points at one stage in the second set. That was not entirely her doing. Krejcikova, a former French Open doubles champion, has begun to come into her own as a singles player and has a wide array of shots and tactical options, as well as baseline power when she chooses to summon it.

But Krejcikova, too, struggled with her nerves on Wednesday. She has been open this week about her efforts to manage the mental strain of making her first deep run in singles at a Grand Slam tournament. 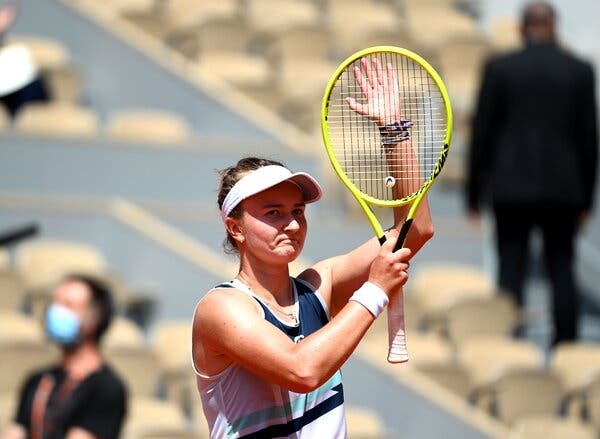 Krejcikova will play in her first Grand Slam tournament semifinal.Credit…Caroline Blumberg/EPA, via Shutterstock

Before her fourth-round match with Sloane Stephens, she said she locked herself in a room used by the physiotherapists to talk to her psychologist. “I was actually crying,” she said. “I just felt really, really bad, and I don’t know why.”

She said she and her psychologist had a long discussion. “She told me, ‘If you can overcome this, what you feel right now, it’s going to be a huge win, and it doesn’t matter if you’re going to win on the court or lose on the court, because it’s going to be a personal win.’” It turned out to be a win-win as she played a brilliant match to defeat Stephens, mixing her spins and decisions expertly, just as Gauff played her best match of the tournament when she defeated Ons Jabeur in the fourth round, winning in straight sets without a double fault.

But Wednesday was a different day. Gauff double-faulted on the opening point of the match and finished with seven, often catching her service tosses and working to control her breathing. After falling behind by 5-0 in the second set, she did not go through the motions. She kept fighting, holding serve, and with the crowd behind her, saving three match points to break Krejcikova’s serve in the next game and then saving two more as she held serve to close to 5-3.

Gauff smashed her racket after she double-faulted to fall behind, 4-0, in the final set. Credit…Clive Brunskill/Getty Images

Another momentum swing still felt possible given both players’ inexperience at this level of a Grand Slam tournament. But Krejcikova held firm in the next game and when Gauff missed her final forehand, she became the second unseeded player to reach this year’s French Open semifinals. Tamara Zidansek, an unseeded Slovene, will face Anastasia Pavlyuchenkova on Thursday.

“This one will be on my mind for a couple days, for sure,” Gauff said. “I think just reflecting on it, you know, it’s over, so I’m not going to say, ‘Oh, if I did this, if I did that.’ I think in the moment I did what I thought was the best decision and I have to stick on that.”

Gauff will start preparing for Wimbledon, which begins on June 28. It is where she burst to prominence in 2019 at age 15 by defeating Venus Williams in her first Grand Slam singles match.

Her progress since then has been steady rather than meteoric. There will be more to learn from Wednesday’s setback. But this was a positive clay-court season and tournament for the usually much more poised teenager. She reached the semifinals of the Italian Open and won the singles and doubles titles in Parma. She was seeded 24th in Paris — her first time being seeded at a major tournament — and won four matches without dropping a set.

“Her time will come,” Krejcikova said, who at 25, knows a thing or two about patience.

N.B.A. Fans Wanted a Show. They’re Also Getting a Reckoning.