A week in hockey that began and unfolded beneath a dark shadow cast by fisticuffs and fines ended with the game’s truest marker of a great season, from its most exciting player.

That it happened on Saturday on “Hockey Night in Canada,” the closest thing the nation has to appointment television, and in Edmonton, Alberta, the center of so many of the sport’s most lasting achievements by the best to play the game, befitted Wayne Gretzky’s successor.

That it happened so quickly was astonishing: Connor McDavid reached 100 points in 53 games.

“I can’t believe my mom was still awake,” McDavid said after the game. “She was happy I was able to do it before the third period. She was excited. She said she couldn’t get to bed.”

The N.H.L. condensed this season to 56 games from 82 because of the coronavirus pandemic. The league realigned its four divisions to accommodate travel restrictions between Canada and the United States, with Edmonton playing in the all-Canadian North Division. It has been a short season that has felt like a long season, never more so than last week.

Last Monday, hockey made headlines when Tom Wilson of the Washington Capitals attacked two players from the Rangers after the whistle. He was fined $5,000 for roughing Pavel Buchnevich, but his tossing to the ice of Artemi Panarin was overlooked. In a rematch on Wednesday, the Rangers retaliated off the puck drop in a game with 141 penalty minutes assessed. The Rangers rebuked the league’s decision not to suspend Wilson, and were fined $250,000 for comments that Commissioner Gary Bettman called “demeaning of a league executive.” It was not a great week for hockey.

But on Saturday, McDavid, who had been racing toward the mark for several weeks, provided a needed distraction. He now has 31 points in his last 11 games.

“Four-point nights aren’t something that come regularly,” McDavid said. Yet it was his fifth four-point game this season, and he has had five points in a game twice.

McDavid scored on his first shift and played as if he were possessed. He hunted the puck and called for it. He was in on all four goals made by the Oilers.

In the second period, McDavid raced along the boards. With one hand on his stick, he stripped the puck from Canucks defenseman Quinn Hughes to set up a goal by Jesse Puljujarvi. Then he drew an interference penalty and set up a power-play goal by Leon Draisaitl. His 100th point came near the end of the second period, when he set up Draisaitl again. 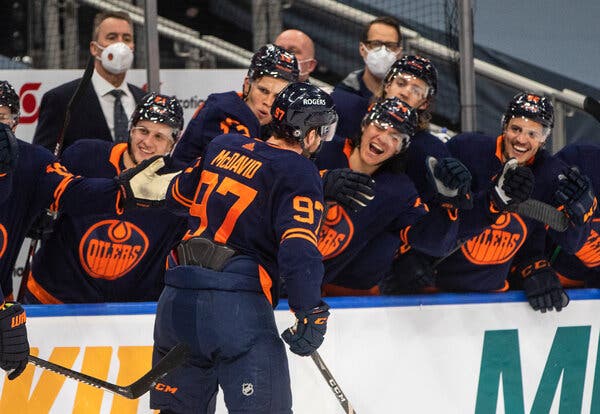 McDavid’s teammates tried to get him the puck at every opportunity on Saturday.Credit…Jason Franson/The Canadian Press, via Associated Press

McDavid, 24, now ranks fourth in the N.H.L. with 1.4 points per game in his career, behind Gretzky, Lemieux and Mike Bossy.

“It really means the world to me,” he said. “It’s special to be part of a group like that. Obviously those are the game’s best players of all time. It’s special to be mentioned in the same breath as those guys.”

“This is a player that gets checked harder than any other player in the league,” Oilers Coach Dave Tippett said. “I guarantee you every team comes in here and talks about how they’re going to check him and keep him off the board, and he still does what he does. It’s an amazing, amazing feat what he is doing.”

In his career, Gretzky scored 100 points in 53 games or fewer 11 times. But Gretzky himself acknowledged the vast difference between McDavid and the rest of the players in the league, and the different, lower-scoring era in which he plays.

“There’s so many great players today, but if you’re going for 100 and they’re in the 70s, that’s pretty remarkable,” Gretzky told The Edmonton Sun last week.

“Most nights for him are two and three points,” he said. “For me, I could go a couple of games with one point or no points and have that one five- or six-point night back-to-back. Connor seems to be solid all the way through.”

On the “Hockey Night” broadcast, comparisons were drawn to the excitement felt in 1981 when Gretzky scored five goals in a game against the Flyers to reach 50 goals in 39 games, a record many believed would stand forever.

Although this was not quite that, in Edmonton it felt a lot like old times, though one significant part of the story is missing: Gretzky won four Stanley Cups with the Oilers, and McDavid has yet to win one.

“We have bigger things to worry about,” McDavid said, having enjoyed the moment, ready to move on.

The Super League Is Gone. What Now?