Denmark’s players gathered in a circle on the field at the Parken Stadium in Copenhagen and stared intently at a staff member’s phone. They must have known, by then, that they had qualified for the last 16 of the European Championship, but they wanted to be sure. They wanted to see the score confirmed, officially.

The Danes had come into their final group game on Monday needing the dice to roll in their favor to make it through. They required a win against Russia on home soil, and for Belgium to beat Finland in St. Petersburg. That they had a chance at all, though — that their coach, Kasper Hjulmand, could tell his players that this was the start, not the end, of their tournament — was remarkable in itself.

It is not yet 10 days since Hjulmand admitted that his players were “broken,” traumatized by the experience of seeing their friend and teammate Christian Eriksen collapse on the field during their opening game against Finland, forced to stand guard around him as his heart was restarted as he lay motionless on the turf, and to accompany him from the field as he was taken to hospital. 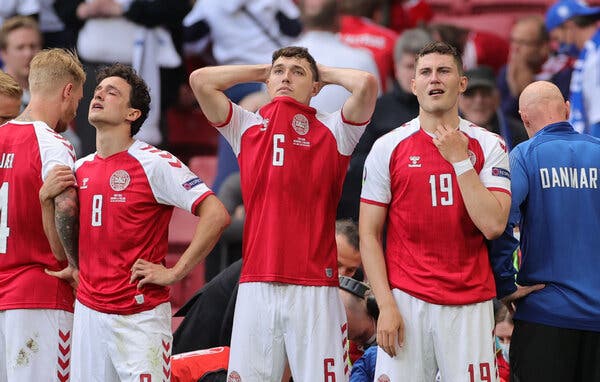 Denmark’s players formed a worried circle around Christian Eriksen on June 12. Later, they wondered if they should have played at all.Credit…Pool photo by Friedemann Vogel

They had to comfort his distraught partner, and then endure the most agonizing wait to discover if he was out of danger. Quite where soccer came in the pecking order was illustrated by the squad’s insistence it would not decide whether that game would continue or not until the players had word about Eriksen’s health.

Only when they were told that he was conscious and speaking at the hospital did they press on, playing the game the same evening because — as Hjulmand said — they could not bear to face a night of sleepless worry and then have to start again the next day. They played, and lost. A few days later, in front of an emotional crowd of about 25,000 fans at Parken, they played and lost again, this time to Belgium.

That was hardly surprising. Hjulmand had said that counseling would be available to all of his squad, should they feel the need, but it would take some time for that to have an impact. This was not the sort of blow you shake off in time for the next game.

Still, Denmark had one more chance. It had taken the lead, through Eriksen’s replacement, Mikkel Damsgaard, and doubled it through Yussuf Poulsen, but Finland was still stubbornly holding on in St. Petersburg. And then a roar swept around Parken: News had filtered across the Baltic that Belgium had scored. Only, as it turned out, the goal was ruled out — after a short delay — for offside.

As Denmark was absorbing that blow, Russia won — and converted — a penalty kick. Everything hung in the balance once more. Again, Denmark was made to wait.

A few minutes later, there was another roar from the stands, this one a little more reticent. This time Belgium had taken the lead. This time the goal counted. Denmark could relax. When Andreas Christiansen scored a third, and Joakim Maehle a fourth, the team and the stadium and the nation could celebrate. Maehle ran to the crowd, holding up the numbers 1 and 0 with his fingers: Eriksen’s jersey number.

Denmark’s prize is a round of 16 match on Saturday, against Wales, in Amsterdam, at the stadium where Eriksen made his name. It does not matter at all, not in the grand scheme of things, but still, it means the world.

The Big Three Vie at the French Open, Each With His...