The linesman said he didn’t see it. Neither did the Spanish referee. And the television replays were inconclusive.

But Euro 2020 got its first real controversy on Tuesday:

Let’s go to the videotape.

The incident happened just before halftime, as Rüdiger snuggled up behind Pogba as he prepared to receive a throw-in deep in Germany’s end during their teams’ group-stage match in Munich.

In the United States, ESPN’s broadcast team didn’t draw any conclusions of what occurred. In Britain, Roy Keane, who knows a thing or two about getting under an opponent’s skin, called it more of a “nibble” than a bite on ITV. In Brazil, where he is preparing to play for Uruguay in the Copa América on Friday, Luis Suárez probably wondered why he was suddenly a trending topic on Twitter.

But was it a bite? Or did it just look like that? 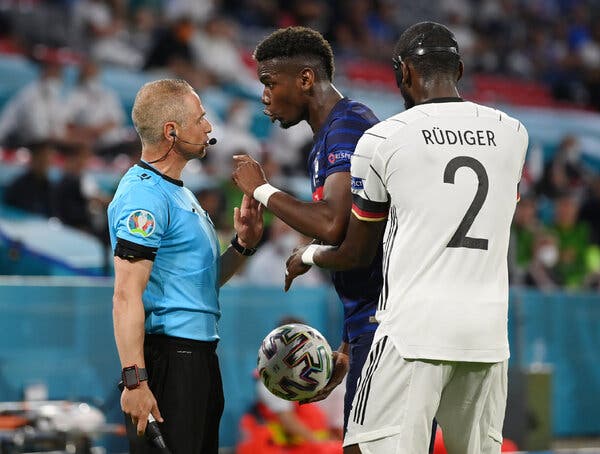 Replays offered Rüdiger enough of a degree of deniability, the former Premier League referee Mark Clattenburg suggested on ESPN. He said there was no way the referee — or even the video review system in operation at the tournament — could rule on it beyond a shadow of a doubt. The video-assistant referee was far more certain about the two French goals it ruled out for offside.)

But almost as soon as Pogba vs. Rüdiger became a flash point, it was over. Play continued with Rüdiger taking a free kick. A few minutes after that, it was halftime. But what, exactly, had Pogba been complaining about?

Let’s hope he offers a bit of clarity after the match, which France just won, 1-0.

What to Know About the 147th Kentucky Derby