Nate McMillan, more than most, knows the unpredictable nature of a point guard equipped with unflinching confidence.

As a member of the Seattle SuperSonics, McMillan shared a backcourt with Gary Payton. The brash Payton scored on nearly everyone and backed down from absolutely no one, Michael Jordan included.

So McMillan, now the interim coach of the fifth-seeded Atlanta Hawks, did not panic when the shot of his star guard, Trae Young, was off throughout much of his team’s deciding Game 7 in the N.B.A.’s Eastern Conference semifinals on Sunday night against the top-seeded Philadelphia 76ers.

“I can’t believe how calm I was throughout this game, and I think it just came from the fact that I knew these guys were going to give me everything they had,” McMillan said, adding of Young: “He’s fearless, so the opponents, they have to guard for that. He will take a shot if he’s open, regardless of how many shots he has missed. He really stretches the defense.”

And Young missed a great many shots on Sunday. But his greatest strength is his confidence, maximized by the unpredictability of his repertoire.

Will he spot up from 30 feet or whip a line-drive pass through a small crease into the hands of John Collins? Will he zig and zag into the lane for a floater or lob an alley-oop pass to Clint Capela? Will he pull back for a midrange attempt or lure help defenders into the lane before kicking the ball out to Danilo Gallinari, Bogdan Bogdanovic or Kevin Huerter?

The options appear plentiful on every offensive possession, with Young choosing the route dictated by the defense. On Sunday, Young, dealing with a right shoulder injury, missed 17 of his first 19 shots, as Huerter assumed the offensive burden while amassing a playoff career-high 27 points. 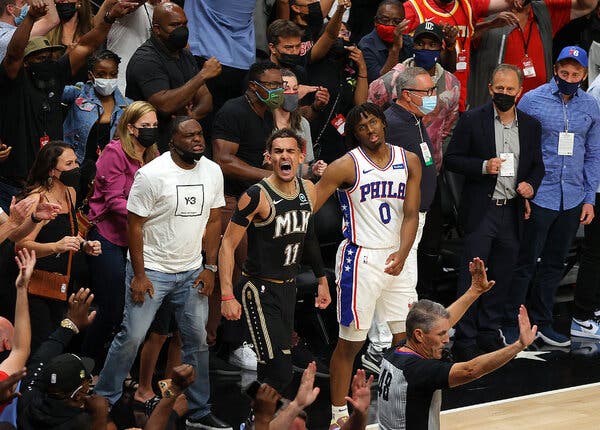 Young, center, has leaned into the intensity of the playoffs, rewarding home crowds, pictured, with his effort and shrugging off the jeers on the road.Credit…Kevin C. Cox/Getty Images

The threat of Young pulling up from deep lengthened Philadelphia’s defense, and his many forays into the lane resulted in several finishes for Capela as Atlanta kept the game close.

“I know I just had to find a way,” Young said afterward. “My shot was off tonight. My right hand and my shoulder — I was still trying to fight through it and push through it and shots weren’t going tonight, but my teammates showed up and made plays. Me, I just tried to find them.”

In the closing moments, Young found his shot and Atlanta claimed the series with a 103-96 victory, earning its first conference finals trip since 2015. The Hawks will face the No. 3-seeded Milwaukee Bucks. Atlanta never trailed after Young’s midrange floater put the Hawks up, 86-84, and his long 3-point shot and free throws cemented the outcome.

“They were making plays for me throughout the whole game,” Young said. “Just wanted to come through in the end and help them out a little bit. I know I didn’t shoot the ball great today, but they definitely made plays, and it was a total team effort tonight.”

This season is coming to a close without the mainstays of recent playoffs, partly because of a rash of high-profile injuries. LeBron James and the Los Angeles Lakers bowed out in the first round. Kevin Durant, Kyrie Irving and James Harden lost in the second with the Nets. Stephen Curry’s only postseason appearances came while watching his brother, Seth, play for Philadelphia.

Instead, these playoffs are providing a stage for players like Young and Phoenix’s Devin Booker to come of age. Both have been accused of putting up empty calorie stats for losing teams.

Young took what defenses allowed as he learned the league during his first two seasons. He just didn’t have the caliber of teammates that he is now surrounded with in his third.

Atlanta did not cross the 30-win threshold in either of the two previous seasons and was not one of the 22 teams invited into the Walt Disney World bubble last season when the N.B.A. resumed the pandemic-paused season.

The organization quickly and smartly retooled itself by adding Bogdanovic and Gallinari through free agency and Capela and Lou Williams through trades to go along with the developing core of Young, Collins and Huerter. (De’Andre Hunter and Cam Reddish, two other young players, have been injured.)

The Hawks began the season with the hopes of qualifying for the playoffs, but that goal seemed quickly out of reach. Atlanta started 14-20 before firing Coach Lloyd Pierce and promoting McMillan, who had been an assistant. The Hawks rebounded at the time Bogdanovic returned from an injury that had limited him, finishing the season 27-11 to earn the conference’s fifth seed.

“It’s been a tough journey,” Young said. “It took a lot of losses to get here. For us, I think the guys who have been here since the rebuild, this feeling is a lot better than what it’s been. We know it’s our first year in the playoffs together, and it’s only the beginning, too. That’s the best part about this whole thing.”

Young was at the forefront of both the rebuild and the rally and is averaging 29.1 points and 10.4 assists per game during the playoffs. He can be a frustrating player to watch. He entices fouls in a Harden-esque way, stopping randomly and purposefully in the lane so a defender can brush into him. He is getting results.

So far this postseason, Young has bowed at Madison Square Garden while finishing off the Knicks in seven games, and he performed push-ups on the court at Wells Fargo Center while outlasting the 76ers. The Hawks have claimed five road playoff games in New York and Philadelphia with Young relishing his role as a villain, smiling as crowds have booed and cursed at him.

The last time the Hawks made it this deep into the playoffs, they were led by Mike Budenholzer, now the coach of the Bucks. Milwaukee flexes Giannis Antetokounmpo, a former defensive player of the year, and Jrue Holiday, who is regarded as one of the league’s premier perimeter on-ball defenders. The Bucks are paying Holiday handsomely — he signed a four-year, $135 million extension in April — to make an impact on a series just like the approaching one.

The Bucks pose another serious challenge in a postseason in which Young and the Hawks have continually silenced their skeptics.

No one expected Atlanta to qualify for the conference finals. The Hawks play like a team unaware people think it’s supposed to have a ceiling.

“The confidence is still there,” Young said. “The confidence is going to remain the same. We’re happy we made it to the Eastern Conference finals, but we’re not satisfied. So it’s great that we’re here, but we’ve still got some games to win.”

What to Know About the Yankees’ Coronavirus Outbreak