European soccer’s governing body has begun an investigation of Austria forward Marko Arnautovic after he was accused of making nationalist comments after scoring a goal in victory against North Macedonia in Euro 2020 on Sunday.

UEFA confirmed on Monday that it had appointed an investigator “to conduct an investigation regarding the incident involving the player Marko Arnautovic.” The action came after North Macedonia filed a complaint.

At one point during the outburst, the Austrian team captain, David Alaba, entered the team’s goal celebration and grabbed Arnautovic by the jaw. Many have interpreted the action as Alaba’s attempt to silence Arnautovic.

North Macedonia filed an official complaint after the game.

“The FFM strongly condemns the nationalistic outburst of Austrian player Marko Arnautovic, after a goal scored in yesterday’s match, addressed to the Macedonian player Ezgjan Alioski,” the federation said in a statement. “At the same time, we inform you that we have submitted an official letter to UEFA demanding the harshest punishment for Arnautovic.”

Unofficial reviews of the video from the game have suggested that the remarks by Arnautovic, who is of Serbian heritage, referred to Albanians, and North Macedonia has contended they were directed at Alioski, who has Albanian roots.

Ethnic and political rivalries are a persistent story line in European soccer. Just last week, UEFA ordered a change to Ukraine’s jerseys after Russia objected to a slogan on the collar and a map that included Crimea, which Russia annexed in 2014.

Disputes involving Serbia and its Balkan neighbors are common, and frequently involve Albania, since representatives of the Albanian diaspora dot the rosters of several national teams, including North Macedonia, Kosovo and Switzerland.

At the World Cup in 2018, for example, two Swiss players of Albanian extraction, Granit Xhaka and Xherdan Shaqiri, were fined for making the sign of the double eagle, an Albanian national symbol, during a game against Serbia. That match produced at least six separate disciplinary investigations. 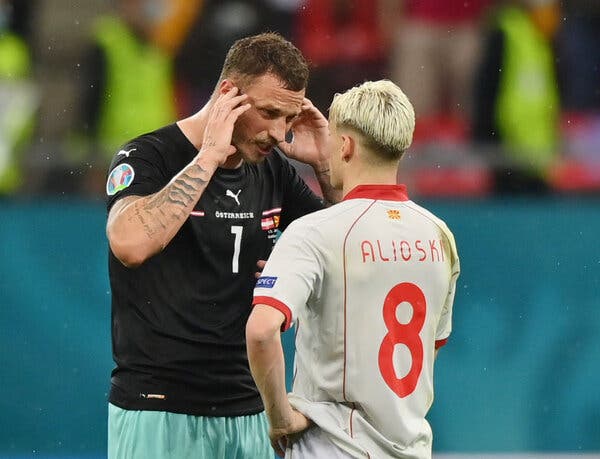 Arnautovic apologized for his outburst on Instagram after Sunday’s game.

“There were some heated words yesterday in the emotions of the game for which I would like to apologize — especially to my friends from North Macedonia and Albania,” he wrote. “I would like to say one thing very clearly: I am not a racist. I have friends in almost every country and I stand for diversity. Everyone who knows me is aware of that.”

Arnautovic, 32, is a veteran forward currently playing club soccer in China for Shanghai Port. His previous stops include Germany’s Werder Bremen and Stoke City and West Ham in England.

But he has been dogged by a reputation for bad behavior and anger on the pitch. “People are always searching for something,” he told The Telegraph in 2013. “If I drop a water bottle it’s like I’ve dropped a bomb or killed a guy. They make a big drama of it.”

In 2009, when playing in Holland, he was accused of directing a racial slur at a Black opponent. The authorities said they found no evidence, and no action was taken.

As France Raises Bar, Its League Faces a $400 Million Hole