His season was not finished — not yet, anyway — when LeBron James grabbed a seat at the far end of the Los Angeles Lakers’ bench on Tuesday night in Phoenix. He would occasionally approach a teammate or an assistant so that he could lean in close for a one-sided conversation. But he otherwise seemed resigned to the reality of the situation. The Lakers were getting routed by the Suns in Game 5 of their first-round playoff series, and James — such an indomitable force throughout his 18-year-old career — was oddly powerless to stop it.

Perhaps there was hope, in some distant corner of Lakerland, that he could muster more of his familiar magic to help the team avoid elimination two days later in Los Angeles. Instead, the Lakers were bound for more of the same: more offensive fireworks from the Suns, more disappointment and even more questions about their future.

The surprise was not so much that the second-seeded Suns won the best-of-seven series, clinching a trip to the Western Conference semifinals with their 113-100 victory in Game 6 on Thursday night. Rather, it was the way in which they did it — by winning the final two games of the series against the defending N.B.A. champions so convincingly.

For the Lakers, it was a gloomy coda to their brief reign atop the league.

By any objective measure, the Lakers faced their share of obstacles. Their run to last season’s championship came in the middle of a pandemic and stretched into October. The 2020-21 season started about two months later. Despite the short break, the Lakers got off to a strong start, going 21-6 before injuries bogged them down. They eventually slipped into the playoffs as a No. 7 seed.

“I just think the whole thing was a challenge, to play all the way into October and start the season as quickly as we did,” Coach Frank Vogel said. “It was going to be an uphill battle.”

There is a big “what if,” of course: What if Anthony Davis, their All-Star power forward, had remained healthy against the Suns? The Lakers had a 2-1 series lead when Davis strained his groin in Game 4. Sensing weakness, the Suns pounced to even the series. Davis was in street clothes for Game 5, which the Suns won by 30, then spent 5 minutes 25 seconds on the court for Game 6 before he left in pain, done for the night and for the season.

Davis is extraordinarily talented and helped fuel the Lakers’ championship, but nobody is accusing him of being the sturdiest player in the league. Prone to injuries for much of his career, he missed about two months this season with a calf strain, and his problems in the playoffs cost the Lakers at the worst time.

“We had the pieces,” Davis said. “We just couldn’t stay healthy. A lot of that is on me.”

James, 36, was not immune to injury, either. He sprained his right ankle in March and missed a total of 26 games before the playoffs. On Thursday, he tried to tow the Lakers back from a 29-point deficit, helping cut it to 10 in the fourth quarter. He finished with 29 points, 9 rebounds and 7 assists, but acknowledged that his ankle was still bothering him. He said he was looking forward to a full off-season.

“It’s going to work wonders for me,” he said, indicating that he would not play in the Olympics.

The brightest star in the series was the Suns’ Devin Booker, who, at 24, has officially arrived as one of the league’s premier players. On Thursday, he scored 47 points and shot 8 of 10 from beyond the 3-point line. When James made his first trip to the playoffs, with the Cleveland Cavaliers in 2006, Booker was 9 years old. After Thursday’s game, James autographed his jersey and gave it to him.

“I love everything about D-Book,” James said. “He continues to make the jump.” 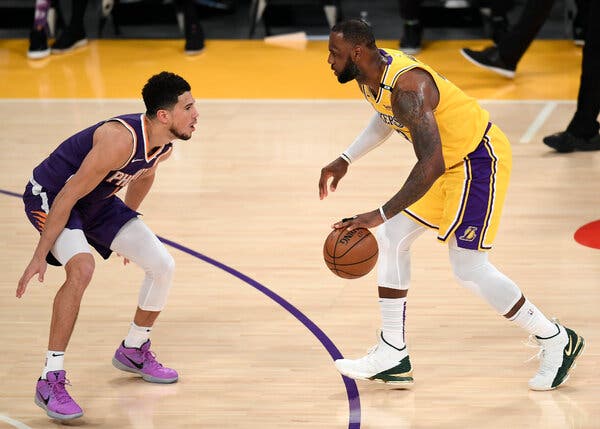 Devin Booker is one of the younger players threatening James’s throne.Credit…Harry How/Getty Images

While the Suns go about preparing for the Denver Nuggets in the next round, the Lakers will begin the hard work of addressing where they go from here.

Just five players — James, Davis, Kentavious Caldwell-Pope, Kyle Kuzma and Marc Gasol — are under contract for next season, and Montrezl Harrell has a player option. (In a contractual quirk, the Lakers also owe Luol Deng, who last played for the Lakers in 2017, $5 million.) The big earners, though, are James, Davis and Caldwell-Pope, who, combined, are due nearly $90 million — a sum that, because of salary-cap restrictions, will limit the Lakers’ ability to make significant moves in free agency. The Lakers are unlikely to undergo any extreme makeovers. And they could wind up paying a hefty luxury tax if they re-sign some of their own free agents.

James said he had faith in Rob Pelinka, the team’s general manager.

“I will have some input,” James said, “but he always asks my input.”

No one is about to feel sorry for the Lakers. Davis forced his way to Los Angeles. James is starring in a major motion picture this summer. And the Lakers, with all the inherent advantages as a big market franchise, won it all last fall. So spare the tears.

But the road does seem a bit uncertain for them — and for James, in particular. One of the game’s great competitors, he was the sixth-oldest player in the league this season. (Worth noting: The two oldest players, Udonis Haslem and Anderson Varejao, combined to appear in six games and score 17 points.) In two of the last three seasons, James sustained serious injuries after avoiding them for most of his career. No athlete is immortal.

Now, James is fighting the inevitable effects of age while trying to ward off a group of up-and-comers like Booker — “Young guns,” James called them — who are determined to seize their rightful share of the stage. Perhaps they already have. James was asked whether their presence would motivate him to come back stronger.

“I don’t need motivation from anybody in this league,” he said. “I motivate myself.”

In Paris, Rafael Nadal Is the Same as Always, and Yet...