Kevin Durant, James Harden and Kyrie Irving spent about as much time on the court together with the Nets this season as it takes to watch a Martin Scorsese movie.

The lack of reps is likely to have little impact as the No. 2 Nets face the No. 7 Boston Celtics, winners of Tuesday’s play-in game over the Washington Wizards, in the first round of the N.B.A. playoffs in the Eastern Conference.

The Nets are assembled for the singular purpose of stacking 16 postseason wins, which add up to a championship. They enter the playoffs with all three stars available after Harden returned from a hamstring strain before resting the regular-season finale, which didn’t matter for the team’s playoff seeding.

But for all their accolades, they were mostly absent from last year’s postseason. Durant was still recovering from his ruptured Achilles’ tendon. Irving dealt with a shoulder injury. And Harden’s Houston Rockets whimpered out of the playoffs, eventually triggering the seismic deal that landed him with the Nets.

Individually, they do not have much on the basketball court to prove. Collectively, a successful postseason from the Nets could show that years of planning and plotting by other franchises can all be for nothing. The N.B.A. is a star-driven league and the Nets flex a stacked deck.

Here’s what you need to know about their first-round series against the Celtics. 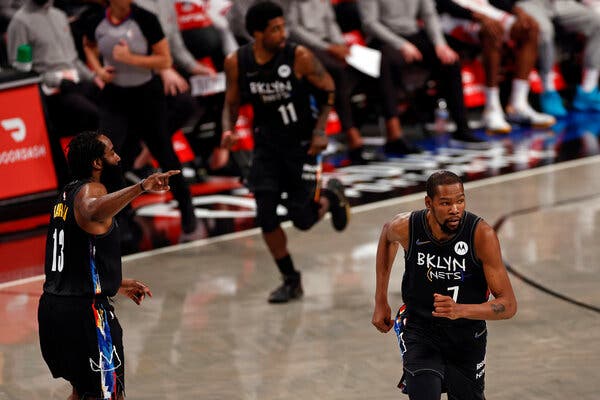 The three biggest Nets stars, Irving, James Harden and Kevin Durant, spent only 202 minutes together on the court during the regular season because of injuries, coronavirus protocols and personal absences.Credit…Adam Hunger/Associated Press

How many games have Durant, Harden and Irving played in together?

Eight games for a total of 202 minutes.

Yes, just four more quarters than a playoff series stretched to its max. Durant missed games because of coronavirus health and safety protocols and a hamstring injury. Irving missed time for personal reasons and for a facial contusion near the end of the season. And Harden, traded to the Nets from the Rockets in January, missed much of the end of the regular season with a right hamstring injury.

How did the Nets still finish with the second-best record in the East?

They can do video-game highlight plays, like Durant’s recent finishing with an alley-oop pass off the backboard.

The Nets are not just any team with a rookie coach and an unsteady lineup. There is a reason Coach Steve Nash hasn’t sweated much this season. While Durant, Irving and Durant did not share the court often, Nash has often had a combination of the three at his disposal and they’ve all been sensational. Impressively, Harden did not need much time to familiarize himself with the Nets’ personnel.

Enough about those three. What about the rest of the roster?

A team is stacked when the league’s leading 3-point shooter isn’t mentioned until this point. The sharpshooter Joe Harris paced the league by making 47.5 percent of his shots from deep, and he should be available after missing the final three games of the regular season with a gluteal strain.

The Nets tried to upend the buyout market by obtaining former stars — Blake Griffin and LaMarcus Aldridge — hoping they still had a little mileage left in the tank. Griffin has showed the occasional spring in his step and had 20 points in a win over the Denver Nuggets. An irregular heartbeat abruptly forced Aldridge’s retirement from the N.B.A. in April at the age of 35.

Jeff Green, a veteran with plenty of playoff experience and a member of the Durant-Harden Oklahoma City teams, has been a decent addition. Bruce Brown wiggled his way into the rotation following the Harden trade and never relinquished his opportunity. The Nets shouldn’t lack for scoring, but they will be without Spencer Dinwiddie, the capable guard, who is recovering from a knee injury.

Harden’s trade to the Nets in January from Houston shifted the power dynamic in the N.B.A.Credit…Adam Hunger/Associated Press

As a head coach, Mike D’Antoni revolutionized the league’s offense, ushering it into modernity by prioritizing space and 3-point shooting. His two main conduits for breathing life into the vision in his stops in Phoenix and Houston? Nash and Harden.

For all of D’Antoni’s influence, he never won an N.B.A. championship. With the Nets, he is an assistant to Nash and working with Harden, who is also still vying for his first title.

How about Irving against his former coach, Brad Stevens, teammates and organization? In 2018, Irving told the die-hard Celtics fan base, “If you guys will have me back, I plan on re-signing here.” Then in July 2019, he signed with the Nets.

How did Boston make the playoffs?

Barely. Like the Nets, Boston (36-36) meandered through the regular-season, hindered by injuries and virus protocols. The Celtics needed the play-in game and Jayson Tatum’s 50 points against the Wizards to arrive at this matchup. They spent much of the season not looking like a franchise that had journeyed to the Eastern Conference finals three of the last four seasons.

Unlike the Nets, Boston will not be at full strength at the right time. The All-Star Jaylen Brown is out after wrist surgery for a torn ligament. Center Robert Williams is uncertain after he aggravated a turf toe injury during the play-in game.

“We’ll do our best to get ready for Brooklyn,” a realistic Stevens told reporters after defeating the Wizards. “They’re the best of the best. As a fan of the N.B.A., it’s hard to see those guys losing. We’re going to have to play great and play great together.”

What’s a key matchup to watch?

Durant and Tatum are two of the most prolific and innovative scorers on the planet. This will be Durant’s first postseason since he suffered his Achilles’ tendon injury in Game 5 of the 2019 N.B.A. finals with Golden State. As much of an offensive talent as Durant is, Nash has labeled him his team’s best defender and Durant will likely check Tatum often in the series.

How did the Nets and Celtics fare against each another during the regular season?

The Nets swept the three games from the Celtics, despite having to mix and match their lineups.

Why will the Nets win?

Why will the Celtics win?

Tatum and this recent photo of Mayor Bill de Blasio of New York dressed up in random Nets gear. De Blasio was posing to bring attention to the Barclays Center pop-up vaccination site, but it is not exactly a look that strikes fear in an opponent.