Larry Scott, the Pac-12 commissioner since 2009, is preparing to step away under pressure.

On his watch, the league signed a then-record-setting television deal; added schools; and played sports during the coronavirus pandemic after planning not to compete last fall. But Scott also championed the creation of a television network quickly and widely deemed a white elephant; presided over the league when its teams were repeatedly shut out of the College Football Playoff; and saw his grandest expansion ambitions go unrealized.

The Pac-12’s payouts to its universities have lately been among the lowest in top-tier college sports, and the league announced in January that its university presidents and Scott had “mutually agreed that the commissioner would not seek a new contract.” He will leave at the end of the month, a year before his contract’s expiration. George Kliavkoff, the president of entertainment and sports for MGM Resorts International, will succeed him.

In an interview last week, Scott, a former chief executive of the Women’s Tennis Association Tour, expressed vanishingly few regrets about his Pac-12 record. The interview has been edited for length and clarity.

The league performed well in the basketball tournaments this year. Was that the high point of your tenure?

We’ve won more national championships than any other conference each of the 11 years that I’ve been here, so there are really a lot of satisfying and gratifying moments. Obviously, this year winning the women’s basketball championship and having U.C.L.A. in the Final Four for the men and having the best overall conference in college basketball is right up there.

Eleven years ago this month, what was then the Pac-10 was on the brink of bringing in a handful of schools, including Oklahoma and Texas. How did the plan’s collapse shape your time as commissioner?

I’ve never been afraid to take big swings, whether it was a vision for a Pac-16, broadening the scope of what the conference was doing in China, owning and controlling our own television network, some of the things we’ve done around student-athlete welfare.

We’ve led a dynamic, bold agenda, and that included having a big idea for expansion and trying to include Texas and Oklahoma. It was not meant to be, and we wound up expanding with Utah and Colorado. 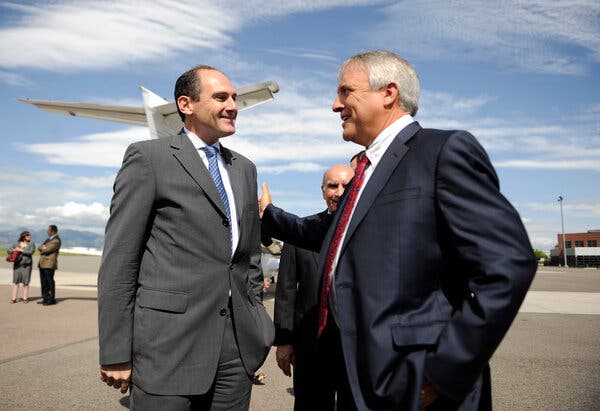 Gov. Bill Ritter of Colorado welcomed Scott, left, at the Rocky Mountain Airport in Broomfield in 2010 after the University of Colorado officially joined what was then the Pac-10 conference.Credit…Cyrus McCrimmon/The Denver Post, via Getty Images

My instincts then are still my instincts now: The Pac-12 has got great institutions in great markets, but we are undersized in terms of populations, alumni bases, fan passion and, of course, being in the western part of the United States, time zones. It’s always been my belief that the Pac-12 has to be bold and take chances and do things differently to effectively compete with schools and conferences and markets with more traditional, bigger, more fervent fan bases.

What has been the secret sauce, in your mind, for what’s worked?

We’re operating in a completely different orbit now than when I arrived in 2009 as a modern, progressive, innovative league. The things I’m most proud of, in addition to our student-athlete success, is five-times growth in revenue, leading initiatives around student-athlete revenue, having the largest TV contract in college sports in 2012 and, through an owned and controlled media company, setting ourselves up for great future success.

You’ve taken hits regarding the Pac-12 Network, and a lot of people say it hasn’t met expectations.

I’m very bullish on the value of college sports right, in general, but the Pac-12’s in particular because the conference is in the position of owning its rights. The value of premium college sports continues to increase, and I think it’s validated the initial strategy. The challenges, of course, have been that while we had the biggest TV contract in college sports in 2012, other conferences have since had a chance to redo their deals. Our time is coming in 2024, and I’m highly confident the conference is going to see a massive increase in its TV rights.

Have you had doubts about the network, seeing the numbers as they’ve been over the years?

For those who were involved at the time, they realized it was a long-term strategy and owning and controlling the rights was the right move despite challenges in distribution with a network when you haven’t granted your rights to a partner. In hindsight, I think we could have taken less money and would have had a less impressive deal in 2012 if we had kept our deal shorter and had a chance to reset sooner. I probably didn’t fully appreciate the short-term pressures our campuses would feel when another league redid a deal.

You’ve been criticized for how you ran the conference and its operations — everything from officiating to moving the league office to San Francisco. You’ve been the highest-paid commissioner in college sports. Do you think you earned it?

That’s for others to determine, but it’s ultimately the presidents and chancellors who decided the value that I brought. My contract was repeatedly re-signed and extended and increased. Keep in mind revenues for the Pac-12 increased five times over my tenure, as well as the equity value in the network.

You want the football playoff to expand. It’s on the table. Do you think it will it actually happen?

But you’ve got a lot of other partners who need to sign off, too.

I think there’s a good chance. The time is right to expand and have conference champions from the major conferences have a slot in the playoff, as well as broader access beyond that, so I think there’s a lot of momentum for that to happen. There are important meetings coming up this month before I leave, and I intend to do everything I can to advance the ball.

Do you think they’ll actually act this month?

I expect a decision in principle at meetings I’ll be in this month. Then, if we’re proceeding, there will be other details to work out. But the big decision as to whether we’re moving forward will be this month, I anticipate.

What, or who, are the obstacles?

Finding consensus and unanimity. You have 11 different entities that have to sign on.

The N.C.A.A. has come under fire for a lot of reasons. Its president, Mark Emmert, just got a contract extension. Do you have confidence in him?

Mark’s got a tough job, and the N.C.A.A. is a membership association and plays an important role in collegiate athletics. I think it’s become increasingly difficult for the N.C.A.A. to govern universities with disparities in resources, priorities and goals. The conferences with the largest resources have wanted to do more and more for student-athletes over the years, but because not everyone can’t afford it, it’s been hard for the N.C.A.A. to be nimble and progress, and that’s why we have some of the challenges that we have now.

The move toward more autonomy for bigger conferences that get the most attention is going to be important going forward.

You didn’t answer my question. Do you have confidence in Emmert?

Yes. I’ve got high regard for Mark.

The idea for a European Super League in soccer collapsed in spectacular fashion. You’ve been opposed to such an idea for college football, but you mentioned how the Power 5 have had reservations about what they can and cannot do. Do you think the Power 5 would ever actually try to mount a breakaway from the N.C.A.A.?

I don’t anticipate that in the near term, and it would be a shame for college sports if it got to the point where the biggest schools and conferences felt they needed to contemplate that. I don’t think it will happen so long as the association can stay nimble and recognize the pressures and needs of big schools.

Nimble isn’t a word people usually associate with the N.C.A.A.

Some of the challenges we’re having now in the courts and in Congress and state legislatures are because the association has the lost the benefit of the doubt and credibility that it can be nimble and lead and therein lies the challenge going forward.

You’re in California, where the name, image and likeness movement took off in 2019. There’s a view that the N.C.A.A. should have acted on this a long time ago, but it’s probably going to act this month. Is this the right moment? Or should it have been three years ago, five years ago?

I’m absolutely supportive of more economic rights for student-athletes. It’s hard for me to pinpoint at what stage we could have or should have started allowing N.I.L. payments. But clearly, hindsight being 20/20, it should have been sooner than now because now it’s in the context of states passing laws that are starting July 1 and Congress hopefully progressing with a national law.

As an association, we should be self-critical that we didn’t move on this sooner. Having said that, it’s going to be very complex — and this is not an excuse — but what we’re seeing is one of the reasons it’s been difficult: It’s going to be challenging to ensure allowing N.I.L. payments for student-athletes that don’t lead to pay-for-play and it creeping into recruiting and, ultimately, the professionalization of college sports. That’s what I worry about.

Congress may get involved. Is that a slippery slope for college sports?

It certainly would have been preferable for the association to be ahead of the curve and there was no need for Congress to get involved. But at this stage, I feel it’s essential for Congress to help ensure a national standard instead of a state-by-state patchwork and to give the N.C.A.A. the chance to enforce rules without a constant parade of lawsuits.

Do you think Congress will actually get something done by July 1?

I’m hopeful that there will be at least momentum.

But do you think a bill will pass by then? Congress also isn’t exactly not known for being nimble.

I can’t predict what timing it might progress. I do think it’s essential that there be some momentum by July 1.

Expert Picks: Who Will Win the Preakness?