Knicks Coach Tom Thibodeau is just about out of buttons to push. And he’s running out of time to find new ones.

On Sunday, in Game 4 of their first-round N.B.A. playoff series, his Knicks kept the Atlanta Hawks’ elite backcourt tandem of Trae Young and Bogdan Bogdanovic relatively contained. The two players combined to shoot 40.6 percent from the field. Young went to the free-throw line only five times, four below his season average. Thibodeau got the first productive game of the series out of RJ Barrett, who had 21 points on 8-of-15 shooting, 6 rebounds and 4 assists. And Thibodeau’s midseries adjustment, inserting guard Derrick Rose and center Taj Gibson into the starting lineup, continued to play dividends: Rose again carried the team offensively for stretches, and Gibson provided tough defense and rebounding.

But the Knicks were still run off the court in the second half, losing, 113-96. They are on the brink of elimination heading into Game 5 of the best-of-seven series on Wednesday at Madison Square Garden.

Thibodeau cannot adjust the Knicks out of this: His best player, Julius Randle, has been a negative on the court.

On Sunday, Randle had his best game of the series — and it wasn’t very good: He had 23 points on 7-of-19 shooting, along with 10 rebounds and seven assists. Six of those points came in the fourth quarter when the game was well in hand. In the first half, Randle shot 4 of 12, continuing a series-long slump. He looked more active in spurts throughout the game, but he also seemed to be late on some close-outs against the Hawks’ shooters. The Hawks won on the strength of their perimeter shooting, converting 15 of 39 attempts from 3-point range (38.5 percent). 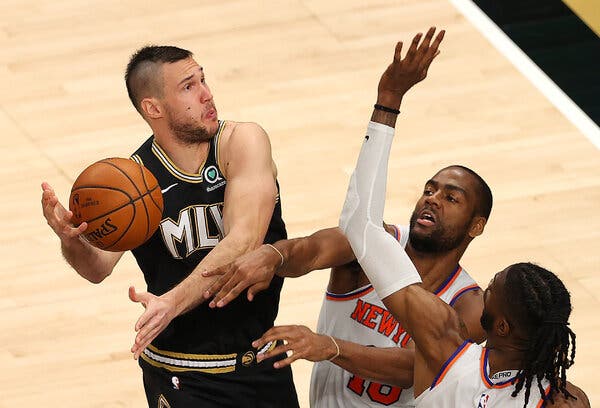 He tried to establish his ailing jump shot early. He missed several step-backs, which made life more difficult for him at the rim, where he missed makable layups. Some of Randle’s ineffectiveness is because the Hawks have engineered their entire defense to stop him. And Randle seemed to make an adjustment Sunday by getting rid of the ball much quicker when double teams arrived.

“I like a lot of the plays that Julius made today,” Thibodeau said after the game. “I’ve felt this all along. It is Julius’s makeup. As he goes through things, he always gets better and better, and that’s who he is. As long as he’s making quick decisions, good things are going to happen.”

But the Knicks needed Randle to hit his shots, especially the open ones. And that didn’t happen.

“Regardless of every individual performance, you want to win games,” Randle said. “That’s the goal.” He added, “Regardless, I have to be a lot better.”

Of course, this isn’t all on Randle, who called this matchup “a learning experience.” Several of his teammates missed jumpers off his passes, unlike Young’s Hawks teammates. But Randle’s lack of production in the series has been magnified by Young, whom the Knicks are also trying to stop at all costs. Young has nonetheless managed to create scoring opportunities for himself and others.

The Knicks are playing without Mitchell Robinson, an athletic shot blocker who would make life more difficult for Young at the rim. This series would be different if Robinson were healthy and able to give Thibodeau more options defensively. (Atlanta’s brass would counter that the Hawks are missing the second-year forward Cam Reddish. Most teams are not fully healthy this time of year.)

You can’t help but wonder if Randle and, by extension, the Knicks are just tired. Very few N.B.A. players faced more of a burden during the regular season than Randle, who had to be the team’s best scorer, rebounder and passer, while playing most of the minutes. And this is where a common criticism of Thibodeau comes into play. He has long been pilloried for relying on his top players too extensively. And against the Hawks, the Knicks’ starters have regressed since the regular season.

Randle led the N.B.A. in total minutes this season. Barrett was second. They were still on the floor late in the fourth quarter Sunday, despite the game’s being out of reach. (As a contrast, Young, who is the focal point of the Hawks’ offense, was 33rd in total minutes.)

Randle was in the game long enough that with around three minutes left, he fouled Danilo Gallinari hard in retaliation for Gallinari’s elbowing Reggie Bullock. On its face, this was a leader standing up for a teammate. But Randle probably should not have been on the floor that late in the game, when the Hawks were winning, 111-87. And if the situation somehow escalated, Randle would have been vulnerable to further punishment from the league.

This Knicks team just might not have its legs, and against Atlanta, a team that moves the ball well and is stacked with shooters and rebounders, being able to move quickly for long stretches is essential. The Knicks, one of the best 3-point-shooting teams in the league in the regular season, were 9 for 29 Sunday, only 31 percent.

Rose, 32, who averaged 26.8 minutes a game in the regular season, played nearly 40 minutes in each of the first three games of this series. After scoring 16 points in the first half, he had only 2 after the break, seemingly running out of gas. Bullock, a typically reliable starter for the Knicks, went 0 of 4 from the field.

In a bright spot for the Knicks, RJ Barrett had 21 points on 8-of-15 shooting.Credit…Dale Zanine/USA Today Sports, via Reuters

The Knicks were down by 4 points after two quarters. But Atlanta’s third-quarter run, triggered by hot perimeter shooting and a lethargic Knicks defense, pushed its lead to 17.

It’s easy to chalk up some of the Knicks’ jitters to their lack of postseason experience. Randle, Barrett and several other players are playing in their first playoff series. But the same goes for the Hawks: Clint Capela is their only starter who did not make his playoff debut this month.

The series is not over yet. Teams facing 3-1 deficits have managed to come back to win the series 13 times in N.B.A. history. Two of them were last year, when the Denver Nuggets defeated both the Los Angeles Clippers and the Utah Jazz in the bubble. And the Knicks are headed home, where a dedicated fan base awaits them.

But it won’t be something tactical that gets the team back into the series. Randle and the other starters who carried the Knicks to this point have to dig deep and find another level. Otherwise, a playoff run that has electrified New York City is going to end much earlier than anyone thought.

A Minneapolis High School Football Team and Its Coach Move On