Cole (5-2) allowed season highs of five runs and seven hits, getting pulled after Garcia led off the sixth with a sharp single on the right-hander’s 89th pitch. Cole struck out seven, but also issued two free passes after walking none over his previous five starts.

Garcia’s 11th homer was an opposite-field shot leading off the second, and was the first of three consecutive extra-base hits. David Dahl and Isiah Kiner-Falefa followed with back-to-back doubles that made it 2-1 and put Texas ahead to stay. Garcia stole home, part of a double steal with two outs in the sixth after Cole exited, for a 5-1 lead.

The Rangers, coming off their first winless road trip of at least six games since 1991, hadn’t won since their previous home game, May 9 against Seattle when they reached .500 for the second time this season.

Jordan Lyles (2-3) struck out six in six innings for his first win in eight starts since winning his season debut April 4. Three of the first four Yankees batters had singles, and Gio Urshela’s run-scoring hit put them ahead 1-0. But they got only one other runner past first base against the Texas right-hander.

Ian Kennedy worked a perfect ninth for his A.L.-leading 11th save in 11 chances.

Luke Voit’s first homer of the season was a solo shot in the Yankees’ eighth.

Calhoun, who had a double leading off the first, hit his fifth homer to open the fifth.

Cole’s franchise record-matching streak of 12 consecutive starts allowing two earned runs or less ended, keeping him tied with Whitey Ford (1963) and Chad Green (2017-19). Cole also snapped a run of five starts in a row going at least six innings and not walking a batter, one off the team record David Wells set 18 years ago.

Cole’s span of 41 ⅔ innings without a walk since April 12 ended when Joey Gallo reached with one out in the third. The ball got past catcher Kyle Higashioka, and Gallo took off and rounded first base before tripping and then having to scamper back to the bag to avoid an embarrassing out.

Mets Win, but Pillar Is Injured 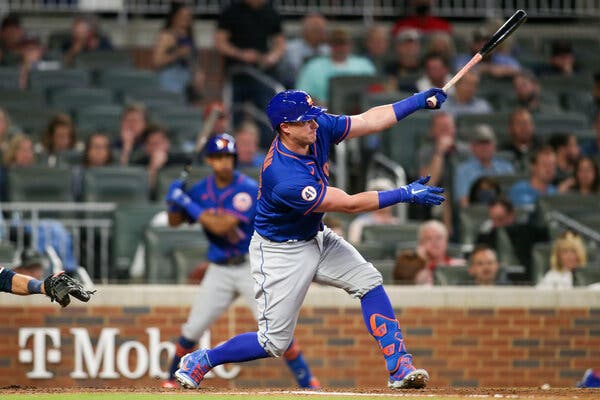 Pinch-hitter James McCann broke a scoreless tie with a seventh-inning double, Tomas Nido had three hits and the Mets overcame more injuries to beat the Atlanta Braves, 3-1, on Monday night.

With the bases loaded in the seventh, Mets right fielder Kevin Pillar was hit square in the nose by a 95 mile-per-hour pitch from Jacob Webb, forcing in a run. Pillar was knocked to the ground, and blood poured from his nose when he lifted his head.

Some Braves players on the field, including Webb, showed their shock and concern as they witnessed the gruesome and frightening scene.

Pillar was able to walk as he was quickly escorted off the field, with towels covering his face. Members of the grounds crew worked to cover up blood left in the batter’s box area as the Braves made a pitching change, removing Webb.

There was no immediate report from the Mets on Pillar’s condition.

Mets starter Taijuan Walker allowed one hit in three scoreless innings before leaving with left side tightness. Sean Reid-Foley (1-0) did not allow a hit in three shutout innings.

Edwin Díaz walked Freddie Freeman with one out in the ninth before closing out the game for his sixth save.

The injuries to Walker and Pillar came after the Mets added outfielder Michael Conforto and second baseman Jeff McNeil to the 10-day injured list with hamstring strains before the game. Ace starter Jacob deGrom already is on the I.L., recovering from right side tightness.

Albert Pujols started at first base and batted cleanup on Monday in his first game for the Los Angeles Dodgers. Credit…Mark J. Terrill/Associated Press

Albert Pujols formally joined the Dodgers on a one-year deal Monday, vowing to contribute to the defending World Series champions as a first baseman, a pinch-hitter and a veteran mentor. He’ll wear a No. 55 jersey in Los Angeles after sporting No. 5 with the Cardinals and the Angels throughout his first two major league decades.

“I feel like I’ve still got some gasoline left in my tank,” Pujols, 41, said. “I’m really excited for this opportunity.”

Pujols was in the Dodgers’ lineup Monday night as their cleanup hitter and first baseman when they faced left-hander Madison Bumgarner in the opener of a four-game series with Arizona at Chavez Ravine.

The fifth-leading home run hitter in major league history said his role with the Dodgers will be “really whatever. I’m here to do whatever, you know. Pinch-hit, first base, whatever they want. I’m just excited to have this opportunity to wear this uniform.”

Pujols’s willingness to accept a situational role with the Dodgers contradicts the Angels’ public statements on the reasons the 10-time All-Star was unceremoniously cut earlier this month.

Pujols said nothing publicly when the Angels designated him for assignment, but he claimed Monday that the abrupt end to his largely unsuccessful 10-year, $240 million tenure with the Orange County club was entirely the Angels’ decision.

“It shocked me, I think like everybody,” Pujols said. “But at the end of the day, no hard feelings at all. I’m here with this organization and I’m excited about this opportunity. I’m not the only player that’s probably going to go through this.”

Willie Mays Carries the Torch for His Generation