INDIANAPOLIS — Helio Castroneves of Brazil raced his way into the Indianapolis 500’s most exclusive club on Sunday, winning the event for the fourth time and finishing ahead of Álex Palou by three car lengths in the fastest 500 miles in the race’s 105-year history.

“You know, you see Tom Brady winning the Super Bowl, Phil Mickelson winning the P.G.A. Championship, now me winning Indy — the old guys are still kicking it,” Castroneves said. “The young guys aren’t getting us yet.”

Released last season after 21 years with Team Penske’s Chevrolets, Castroneves revived his career with this one-off gamble in an untested Nissan-powered racer for Meyer Shank Racing.

“Finally,” Castroneves said after jumping out of his car and climbing the fence at Indianapolis Motor Speedway — as was his custom after his first three 500 victories, in 2001, 2002 and 2009 — along the front straightaway, waving jubilantly to the crowd of 135,000.

Castroneves joined A.J. Foyt, Al Unser Sr. and Rick Mears as the race’s only four-time winners. He was a runner-up three times. 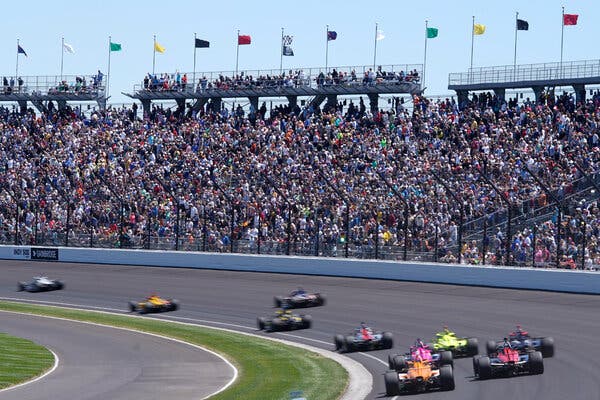 Going around Turn 1 in front of about 135,000 fans at Indianapolis Motor Speedway.Credit…Darron Cummings/Associated Press

“I love Indianapolis, and the fans — their love for me gives me energy,” said Castroneves, whose every move to the front was met by raucous cheers, waving arms and standing fans. “I could see them. I could hear them, even through my helmet, and I knew we could do it together. I knew it was going to be a fight to the finish, and I was going to have to put my elbows out.”

Castroneves traded the point with Palou, O’Ward, Rinus VeeKay and Colton Herta for much of the race.

“I knew I had the race to win, but the whole race was so intense,” Castroneves said. “From the drop of the green flag, it was a fight.”

The race’s first plot twist came during the initial round of pit stops, starting at Lap 30. Half the field had made their regular stops, while the other half tried to stretch their fuel economy to the limit. That strategy backfired when Stefan Wilson crashed on pit road, closing it. Those still on the course, like the former Indianapolis 500 champions Scott Dixon, Alexander Rossi, Tony Kanaan, Pagenaud and others, were unable to make their planned pit stops — and ran out of fuel. Before they could get restarted and refueled, they each lost more than a lap, knocking some prerace favorites, including the pole-winner Dixon, out of contention.

In the next segment, the sport’s vaunted youth movement, which has turned IndyCar’s entrenched order on its head so far this season, established itself at the front of the field: the Indiana native Conor Daly, 29, moved to the lead ahead of VeeKay, 20, followed by O’Ward, 22, Herta, 21, and Palou, 24.

Despite their raw speed, however, another key factor, fuel mileage, was starting to come into play. Veterans like the 2014 winner, Ryan Hunter-Reay; Castroneves; the two-time winner Takuma Sato; and Graham Rahal were wisely stretching an extra lap or two, or more, out of every tank. Thinking of the end of the race, they hoped to make one fewer fuel stop than the rabbits up front. That would be a savings of as much as three-quarters of a lap.

Generally speaking, it seemed the drivers powered by Honda engines were getting better mileage than the Chevrolet runners. But at the 300-mile mark, fuel mileage was taken somewhat out of the equation when Rahal, the fuel economy champion to that point, lost his left rear wheel after a pit stop, causing him to crash; Daly clobbered the loose wheel. That brought out a yellow caution flag that bunched the field, jumbled the order and neutralized the best fuel strategies.

“We had ’em,” a dejected Rahal said afterward. “I mean, we had it figured out.”

His teammate Sato, however, was still on the same strategy and hopeful of benefiting from it He was leading when he pitted on Lap 158, meaning he would need only a short splash-and-go fuel stop around Lap 190 to go for the win.

Other fuel mileage hopefuls were Dixon, who managed to unlap himself during Rahal’s yellow, and Josef Newgarden.

Ultimately, however, pace of the front runners decided the race, and the fuel-savers were left frustrated.

When Castroneves was asked on Sunday if this was enough, to finally, after 12 winless years, join Foyt, Unser and Mears as four-time winners, he said, “No, let’s go for five — next year.”

Castroneves on the fence.Credit…Mark J. Rebilas/USA Today Sports, via Reuters