PARIS — Ashleigh Barty, the No. 1-ranked player in women’s tennis, is out of the French Open after aggravating a left hip injury during her second-round match with Magda Linette on Thursday.

“It’s heartbreaking,” said Barty, who won the French Open in 2019 and did not defend her title last year after she chose to stay at home in Australia instead of traveling during the coronavirus pandemic.

Barty lost the opening set by 6-1 to Linette, an unseeded 29-year-old from Poland. Barty then left the court for medical treatment as Linette stayed in her chair, reading the tactical notes she had brought to the court. 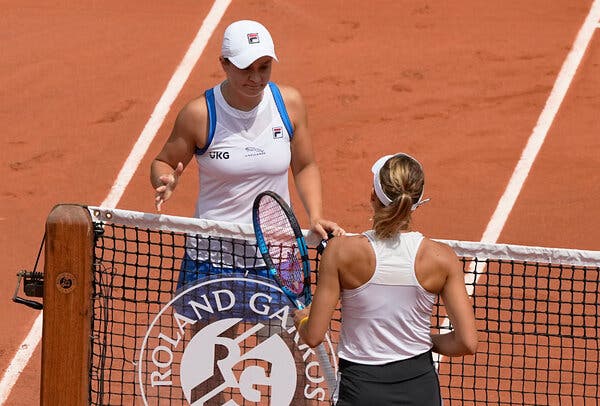 Barty stopped playing at 2-2 in the second set and told her opponent, Magda Linette of Poland, that she could not continue.Credit…Michel Euler/Associated Press

Barty returned for the second set, but at 2-2, she walked toward her chair, put down her racket and then approached the net to shake hands with Linette, putting an end to the match.

Barty, a 25-year-old Australian, received treatment on her hip during a hard-fought first-round victory over Bernarda Pera on Tuesday.

“It’s going to be a little bit tough this week,” Barty had said after that match.

She turned out to be correct, explaining on Thursday that she had injured her hip while serving during a practice session just before the start of the tournament.

“Completely new injury,” she said. “Something that I’ve never experienced before, even chatting with my physio, it’s something she has not seen regularly either. So we’ve been consulting with people all over the world to try and give us some insight into what the best ways to manage it are. I’m confident we do have a plan. It’s just that we ran out of time here.”

Barty pulled out of her first-round doubles match on Wednesday to try to manage the injury.

“I just tried to give myself a chance,” she said. “Obviously practicing we’ve had our restrictions and essentially tried to stay as fresh as possible and not aggravate it in any way. But in a match that’s unavoidable at times. It got worse today, and it was becoming at the stage where it was unsafe.”

“As hard as it is,” Barty added of the retirement, it “had to be done.”

With the French Open just getting started, the top two women’s seeds are out of the tournament. No. 2 Naomi Osaka, who could have challenged Barty for the top ranking with a deep run in Paris, withdrew after her first-round victory because of a dispute over media obligations with tournament organizers that has dominated early coverage of the event.

Simona Halep, the world’s third-ranked player and a former French Open champion, withdrew before the tournament began with a muscle tear in her left calf.

Aryna Sabelenka, the No. 3 seed, is now the highest seed remaining in the women’s singles draw, but Sabalenka, a power player from Belarus, has yet to advance past the fourth round of a Grand Slam tournament. The No. 4 seed Sofia Kenin, a finalist at the French Open last year when it was postponed and played in October, has struggled this year while navigating the difficult decision to stop being coached by her father, Alex.

Kenin arrived in Paris without a coach but has shown signs of resurgence and defeated the American qualifier Hailey Baptiste, 7-5, 6-3, on Thursday. Kenin should face a tougher test in the third round, however, when she plays a fellow American, Jessica Pegula, who has been having a breakout season and is seeded 28th at Roland Garros.

Despite the attrition and instability at the top, this tournament may not be as wide open as it appears. The defending champion Iga Swiatek is still in the draw and has not dropped a set in two rounds, just as she did not lose a set in any of her seven matches in her run to the 2020 title. Last month, she won the Italian Open on clay, defeating the former No. 1 Karolina Pliskova, 6-0, 6-0, in the final.

Barty was, in a sense, defending a title in Paris, too. The tour shut down for five months in 2020 because of the pandemic and when it resumed last year in August, she chose to skip the year’s two rescheduled majors, the United States Open and the French Open.

She has held the No. 1 ranking since September 2019 in part because of temporary changes made to the ranking system to protect players during the pandemic. But she has often played like a No. 1 since her return to action in 2021, winning the Miami Open on a hardcourt and the Stuttgart Open, and reaching the final of the Madrid Open, where she lost to Sabalenka.

It has been a busy schedule, and perhaps too demanding after her layoff. Injuries have cut short her last two tournaments. At the Italian Open, she retired in the second set of her quarterfinal against Coco Gauff with a right arm injury that she said had occasionally flared up since her teens. She said the arm had not troubled her in Paris, but that did not spare her from more pain.

“It’s disappointing to end like this,” she said. “I’ve had my fair share of tears this week.”

Barty now has less than a month to recover before Wimbledon, which begins June 28 and where the grass surface should be a fine fit for her varied game. For now, her only Grand Slam singles title is the 2019 French Open.

Tsitsipas Is the Latest to Come Close, and Learn How Far...