“Keep on keeping on,” the 23-year-old tennis champion posted on Instagram under two on-court photos after making it through the fourth round of the Australian Open (which she went on to win).

For a slide show that began with a shot of the Metropolitan Museum of Art, whose Costume Institute Gala she will co-chair, in September: “oh we lit.”

Below a portrait of herself draped in Louis Vuitton and Nike (both sponsors of hers), simply: “yo.”

Her nonchalance, perhaps, is a way of guarding herself on social media, where many more loquacious celebrities have made unforced errors.

“You don’t really know people, by looking at their profile,” Ms. Osaka said recently. “You feel like you can sort of catch a glimpse into their life, which, in a way, is a bit wrong.” She said she has to remind herself to post on Instagram: “My mind hasn’t been able to keep track of it.”

But certainly her profile, well outfitted as it is, provides a glimpse into her business — and like the meme decrees, business is boomin’. Ms. Osaka is covering everything from ears to rears, making headphones with Beats, athleisure with Nike and denim with Levi’s. Dresses? She designed them with Adeam, a Japanese-American brand. Swimwear? She crafted a collection with Frankies Bikinis.

In April, she announced that she would serve as C.E.O. of her own company: Kinlò, a line of skin care made for people with melanated skin tones, produced with GoDaddy. According to Forbes, she made $37.4 million in endorsements and tournament prizes between May 2019 and May 2020, the most a female athlete has ever earned in a single year.

“She’s the first professional tennis player we’ve worked with,” said Jen Sey, the brand president of Levi’s, “but for us, she rises above that. She’s such a powerful voice, the way she’s encouraged others to speak out about equality. She’s outspoken. That’s what we like about her. There’s no point in partnering with someone if you’re just going to tell them what to do.”

With Nike, she founded an academy to introduce more young women to sports; with L.V.M.H., she joined a judging panel to choose an emerging fashion designer worthy of a 300,000-euro grant. Her imprint seems to be suddenly on everything from enterprise management software (Workday) to water (Bodyarmor).

“She is the perfect storm,” said Cindy Gallop, a brand consultant who has worked with several of Ms. Osaka’s sponsors. “She’s a spectacular athlete. She has a strong sense of social justice, she’s prepared to speak her mind.”

“Thirdly,” Ms. Gallop said, “she’s female, and fourthly, she’s not white. I hate, loathe, and detest terms like this, but she is, in quotes, diverse. She ticks every box. You can practically hear the brand managers thinking: ‘She is absolutely the right person to sponsor, right now.’” 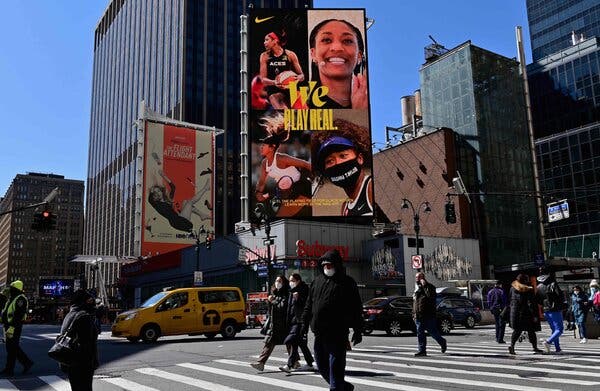 Tennis stars of the past hawked rackets, pain medication, watches (which Ms. Osaka also does, for Tag Heuer) and the ever-changing category of fast food. On a Monday in March, Ms. Osaka found herself in the Los Angeles test kitchen of the chain restaurant Sweetgreen, the Supreme of salad, trying to wrap her head around the notion that one of the restaurant’s dressings — rémoulade — would soon be disappearing from the menu.

“What’s in it that makes it seasonal?” Ms. Osaka said.

“The pickles,” said Katelyn Shannon, a research and development chef of Sweetgreen.

Ms. Osaka nodded. She was wearing a face mask and a high bun; green and black sweatpants poked out beneath her apron. She had more questions: “Are the other dressings seasonal, too?” “What is a salad ‘hack’?” “What’s more popular, kale or romaine?” “How quickly does Sweetgreen go bad?” (Answers: mostly, no; it’s a way to reverse engineer an ingredient, like a seasonal dressing; kale; after two days, stir fry it for 10 minutes for a whole new meal.)

Last year, Ms. Osaka signed a deal with Sweetgreen that gives her equity in the company and makes her its first celebrity sponsor. While both parties declined to disclose the terms of the arrangement, Nathaniel Ru, a founder of Sweetgreen, said the company “wanted to make sure she had some skin in the game.”

“We’re not going to get a logo on her shirt, maybe we’ll get a salad on the sidelines,” Mr. Ru said. Ms. Osaka stars in a new Sweetgreen ad campaign, on billboards and the internet, that features four sides of her personality (two of the lesser known: “the gaming mogul,” “the meditation master”). The goal, Mr. Ru said, is to “shift the paradigm of what fast food can be.”

Traditionally, salad has not had a sponsor; perhaps the closest it came was 10 years ago, when the blog post Women Laughing Alone With Salad went viral. Most of those women were white; perhaps none of them compelled anyone to eat a salad (unironically, anyway).

“Representation is important,” said Ms. Osaka, who is Haitian and Japanese. (Part of the proceeds of a salad she designed for Sweetgreen — with baby spinach and tortilla chips, among other ingredients — will go toward nonprofits working to increase food access in Asian-American and Pacific Islander communities.)

“It’s important for me to represent things I actually believe in,” she said of her brand partnerships, “that I actually eat. I would never do, like, McDonald’s or Coca-Cola, because I don’t consume them. I consume Sweetgreen once every three days. It’s not something that you can fake.” She added, “you can always tell when someone’s lying.”

So radical is her authenticity that it seems to override any desire to appease. When a Sweetgreen employee asked her what she eats on the road, Ms. Osaka said, “at tournament sites they have a salad buffet, so I like to make my own salad.”

“Is it sad?” the employee said.

“Is the salad buffet sad?” the employee clarified.

But noise-canceling is OK: in an ad for Beats headphones.Credit…via Beats

In September, Ms. Osaka won the U.S. Open while declaring solidarity with the Black Lives Matter movement through her face masks. From a corporate sponsorship perspective, this was a turning point: taking a stance increased her brand value. She shortly thereafter teamed up with Basic Space, an online swap meet for hype beasts (sample items for sale include a St. John coat and a Range Rover) to sell 500 masks designed by her 25-year-old sister, Mari. They sold out in 30 minutes, with proceeds going to UNICEF.

“We have a mutual appreciation and respect for what we’re all trying to build,” said Jesse Lee, the founder of Basic Space, “something cool, unique and authentic.” It was he who introduced Ms. Osaka to the founders of Sweetgreen.

The Osaka sisters returned to Basic Space last month to auction off a series of N.F.T. artworks, with the final bid for one, “The Unsuspecting Player,” reaching $150,000. It is a Mangaesque imagining of a brown-skinned woman with a tennis racket and a cascade of pink hair not unlike a wig Ms. Osaka wore in a recent Instagram post.

“I’ve always felt like my sister knows me best,” Naomi Osaka said during an April interview on Clubhouse, the audio broadcasting app. “I’ve grown up watching her draw and do digital art and paintings, I always wanted to find a way to use my platform to showcase that.”

“Though maybe not exactly how I am,” she added, “she captured me well.”

It was Ms. Osaka’s first time on Clubhouse, and she did not hide her bemusement when the volume of Mari’s audio dwarfed her own. “I’m literally right next to my sister, so I don’t get why I have a bad connection and she doesn’t,” she said.

Many of her brand partnerships involve Mari. They collaborate on sketches for clothing Ms. Osaka designs with her fashion sponsors, like an upcoming capsule collection with Levi’s. “I draw really badly, she can make it look good,” Ms. Osaka said. “She’s able to interpret. Sometimes we don’t even have to talk for her to understand what I’m thinking.”

Before the pandemic, Ms. Osaka visited the Levi’s workshop in West Hollywood to conceptualize the pieces, which include an obi-inspired bustier and denim shorts with crystal fringe. When in-person meeting became impossible, she went on Zoom, signing off on 10 designs before they went into production.

“As a little kid, I would watch ‘America’s Next Top Model’ and ‘Project Runway,’ and those were sort of scratching the surface of what goes on behind the scenes,” she said. At Levi’s, she said, she could see the process, “how technical they are about buttons and cutting fabric.”

Far from the celebrity sponsorship model of yore, in which stars of syndicated TV shows claim to color their own hair at home, Ms. Osaka does not want to work with a company unless she’s learning on the job.

As companies scurry to make up for decades of underrepresentation of races other than white, Ms. Osaka is aware that she may seem like the golden ticket.

“I don’t just want to be a figurehead, or someone used,” she said. “If I’m with a brand, I want it to be from my heart instead of just trying to promote a message, just for money.”

Surely, some thirsty brands have offered some pretty sweet deals?

Ms. Osaka laughed. “That’s really a him question,” she said, gesturing at Stuart Duguid, her agent and manager.

Back in the test kitchen, Ms. Osaka had cast herself, convincingly, as student in salad master class, asking about the pros and cons of various greens, what ingredients go together, watching and learning as Mr. Ru, the Sweetgreen co-founder, demonstrated the proper way to mix with tongs “You’ve got to do the twist,” he said, flipping his wrist.

Upstairs, in a makeshift conference room, she photographed a mood board taped to a concrete wall. She gazed at the unfinished ceiling and a rattling screen window. “Really pretty architecture,” she said, sincerely. . Many celebrities are more keen on checking their texts than looking around the room. That’s not Ms. Osaka, or her brand.

“I’m very curious about a lot of things,” she said. “Being curious is one of the happinesses of life, because if you’re not curious, that means you’re sort of settled. I feel really humbled, that I play tennis but I’m able to have all these new experiences and opportunities, like getting to make a salad here. I don’t think a lot of people can say that.”

At Euro 2020, France Ties Again but Still Leads the Way