ST. LOUIS — Jordan Chiles felt numb. She looked around her bedroom in Vancouver, Wash., at the dozens of medals, the rainbows of ribbons, the trophies standing in formation, all from a gymnastics career that started when she was 6.

None of it meant a thing.

She asked her mother, Gina Chiles, to take it all away. Hide it. Dump it. Burn it. Just make it disappear.

“I don’t want them in my room anymore,” she said to her mother, who was taken by surprise.

“Wait, what, your awards are the coolest thing ever,” Gina Chiles recalled saying. “We need to get you an entire U.S.A. Gymnastics room for all of them!”

Gina Chiles didn’t push. As a mother, she understood. It was near the end of 2017, and her daughter — who is one of the favorites to make this year’s U.S. Olympic team at the conclusion of the women’s trials, which begin on Friday in St. Louis — was sick of her sport and how it made her feel.

That year, in only her second senior competition, Jordan Chiles won the silver medal in the all-around at the national championships, stunning the internet with an unconventional save on the balance beam. She was pegged as a rising star.

But she did not make the U.S. team that would compete at the world championships in Montreal. Chiles was stuck watching from home. Though she had performed well, she had not made the roster for any international event that year.

“I didn’t think the sport wanted me anymore,” Chiles, 20, said in a video interview last week. “So I went in the opposite direction.” 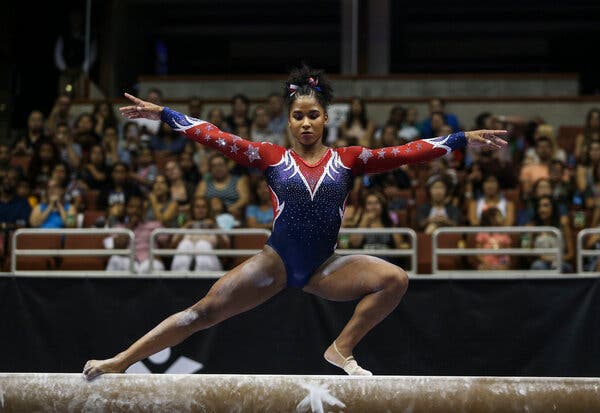 She blamed her former coach, in part, for her unhappiness. Earlier in 2017, Chiles had left that coach, whose methods she found overbearing. Her confidence was crushed. She briefly worked with another coach, but by 2018 Chiles “had checked out from the sport,” her mother said.

After years of being told to watch her food intake, and sometimes to consume only soup, Jordan Chiles said she gave up any intention of a strict diet and started to eat candy and food from Starbucks. She began to attend birthday parties and sleepovers at friends’ houses, no longer afraid that socializing would be blamed for a subpar workout the next day.

But at the nationals in 2018, Chiles finished 11th in the all-around. She considered it a hint.

“I guess this sport is coming to an end for me because things just aren’t working out for me at all whatsoever,” Chiles recalled thinking. “I just wanted to finish high school and go off to college. But then I had a talk with Simone.”

Simone as in Simone Biles, the world’s greatest gymnast. She would take Chiles in and grow as close to her as a sister, helping lead her back to the top of the sport.

She quickly learned to love gymnastics.

Chiles’s parents, Gina and Timothy Chiles, signed up Jordan for gymnastics classes after Timothy had spent a week alone with her while Gina was on a business trip. Jordan, the youngest of their five children, had become a whirling Tasmanian devil, revved up from morning until bedtime, jumping off the furniture and bouncing off walls, and her father couldn’t take it anymore, Gina Chiles recalled, laughing.

So one day they blindfolded Jordan, drove her to a local gym and surprised her with the classes. When they removed the blindfold, she said, “Aw, I thought you got me a puppy.” She quickly learned to love the sport despite its lack of fuzzy cuteness. The sport seemed to love her back.

Timothy, Gina and Jordan Chiles at home in Spring, Texas.Credit…Annie Mulligan for The New York Times

This was not T-ball, where Jordan — who is named after Michael Jordan — earned the nickname Chick, after the character Chicken Little. Jordan’s helmeted head looked huge, like Chicken Little’s, as she stood at home plate, ready to smack another screamer, her mother said. While Jordan was a great hitter, her game wasn’t exactly complete; she preferred to catch air — and not fly balls — by doing cartwheels and flipping in the outfield.

In gymnastics, however, Chick Chiles was good at everything. By the time she was 11, she was designated as elite, at the top level of the sport, and for years was the only elite gymnast in Washington State. At the junior level of gymnastics, she won the all-around at the U.S. Classic in 2014, a year when Biles won the senior title. They were called “Biles and Chiles,” an unstoppable future duo.

As Gina Chiles learned in 2017, the hard way, there was a high price for that success.

Early that year, Jordan had returned home from a national team training camp after being passed over for a spot in an international meet. At the airport, she sobbed when she saw her mother. And again in the car.

For about an hour, the mother and daughter sat parked in their driveway and cried together as Jordan discussed her frustrations with a sport long known for celebrating controlling coaches. There had been suggestions that Jordan shouldn’t lift a single weight or gain an ounce because she was already so muscular. And that her hair, thick and textured, was “too poufy” and made it look as if she had two heads when she twisted.

Gina Chiles stayed up until 2 a.m. that night. She recalled the time a coach had cut Jordan’s braids to make her neck appear longer, a look that Martha Karolyi, then the national team coordinator, was believed to prefer. And Jordan was told she had a bad attitude, when she was just a teenager using her newfound voice.

“I didn’t understand that it had gotten that bad for her,” Gina Chiles said. “So I apologized like crazy. I told her: ‘I’m so sorry. I missed it. I messed up. It’s my job to protect you, and I made a big mistake.’”

Jordan Chiles said, “I don’t think I’ve heard the word ‘sorry’ come out of my mother’s mouth so many times.”

By the end of 2018, Biles had stepped in to offer a suggestion: Why didn’t Chiles just move to Texas to train with Biles at her gym, World Champions Centre, with the coaches Cecile and Laurent Landi? They were tough, meticulous and knowledgeable, yet were adamant that gymnasts lead balanced lives so they could better deal with the sport’s pressure, Biles said to Chiles. But the move had to be what Chiles really wanted, not something done out of obligation. That was the one stipulation.

Right away, Chiles knew that she had to say yes. Before she could go South, though, she had important business to attend to: finishing high school.

She went to prom in a red sequined mermaid dress, played along on senior skip day and got locked into the school with her classmates for a fun evening, things that most elite gymnasts never do, particularly a year before an Olympics they hope to compete in. Two days after graduating from public high school, Chiles walked through the front door of Biles’s gym in Spring, Texas.

She took a deep breath. Tried to keep an open mind. It was the first time in ages she wouldn’t be the star of her gym. She wondered if she could trust the other elite gymnasts and the coaches.

While Biles took on the role of Chiles’s big sister, the Landis were in charge of getting Chiles settled in. Delaying the move to Texas meant that she was now on a short timetable to prepare for the 2020 Olympics. Her first event was the U.S. Classic, about four weeks away.

“We always knew she was super talented, but I remember seeing her at Classic and being shocked at how good she looked,” Cecile Landi said in a telephone interview. “Laurent and I were like, ‘Wait, hold on, wow, this is just the beginning.’”

Cecile Landi called preparing Chiles for the Tokyo Olympics “a race against time” — until the postponement of the Games gifted them another year to prepare. In November 2019, Chiles had surgery on her right wrist, so the postponement also gave her time to heal.

Chiles kept busy during her time out of the gym, setting up a company called Melanin Drip Clothing Co., which sells apparel like hoodies with the words “Beautiful, Black & Brilliant.” She also let it sink in that elite gymnastics didn’t have to be such a rigid, unhappy place.

Biles and Chiles shared a laugh at a U.S.A. Gymnastics training camp last year.Credit…Andrew Spear for The New York Times

Biles will throw dinner parties or travel to beach resorts. Elite gymnasts will joke with one another at practice, or even at competitions. The Landis will actually listen to what their gymnasts have to say, without chastising them for speaking up, Chiles said.

“I discovered that gymnastics doesn’t always have to be about strictness and being so hard on yourself and having so much doubt,” she said. “I actually realized this when I saw Simone compete. She looks like she’s having fun out there, laughing and giggling, and doesn’t look stressed or tired. I was like, ‘You know, I’m going to try that one of these days and see how it turns out.’”

It has turned out pretty well, just at the right time.

This year, Chiles won the all-around at the Winter Cup in February, the first major competition since the coronavirus pandemic began, and finished second to Biles at the U.S. Classic in May. At the nationals this month, she was third. Her consistency has been notable: She hasn’t made a major mistake in competition all year, nailing all her routines.

“I think she’s a completely different athlete now than she was in 2018,” said Tom Forster, who heads the women’s national team program. “So exciting to see.”

It’s just as notable that Chiles has done it all with a joyful demeanor, grinning and singing at meets, even in between events, moving to the beat of music playing in the arena. At the end of the national championships early this month, she encouraged her fellow gymnasts to perform a wedding reception dance staple, the Cupid Shuffle, on the arena floor.

Less than an hour before that dance party, Chiles had finished her final routine at nationals, and the weight of the moment had hit her. Her final push to make the Olympics looked as if it would actually pay off.

She broke down in tears just thinking about it, thankful that her family had supported her, that Biles — one of the best athletes in history — had her back, that she had coaches who supported her and believed in her.

It took a post-meet pep talk from Biles to remind her that, yes, it was true. No coach needed to validate it. No scores needed to prove it.

“You belong here,” Biles told her.