The ball found Ja Morant behind the 3-point line in the third quarter of Sunday afternoon’s game against Golden State. Recognizing that his closest defender was stationed in the paint and did not seem to be in any hurry to throw a hand in his face, Morant, the Memphis Grizzlies’ second-year point guard, launched a 29-footer that caromed off the back of the rim.

Morant got a second look a few seconds later following an offensive rebound but with roughly the same result: another errant 3-pointer, another missed opportunity, another haggard expression.

Second-year players sometimes get overlooked by the basketball-viewing public. The novelty that greeted them as rookies is gone. (Remember when Zion Williamson’s games were appointment viewing?) At the same time, they are graded on a harsher scale: Have they improved? And if not, why not? The honeymoon is over. It is time to produce.

But the lessons never stop, even for the gifted. Morant’s instructor over the weekend was none other than Golden State’s Stephen Curry, who seemed to go out of his way to illustrate the gulf that exists between prodigies and potentates by securing the league’s scoring title with another tour de force: 46 points, nine 3-pointers and a win that gave the Warriors the No. 8 seed in the Western Conference’s play-in round.

With the loss, the Grizzlies were sent to the brink of elimination. As the No. 9 seed, Memphis will need to a win pair of games in the play-in round, starting Wednesday night against the San Antonio Spurs, in order to advance to face the top-seeded Utah Jazz in the first round of the playoffs. There is no margin for error, not anymore, and the spotlight — for better or for worse — will be back on Morant, last season’s rookie of the year. 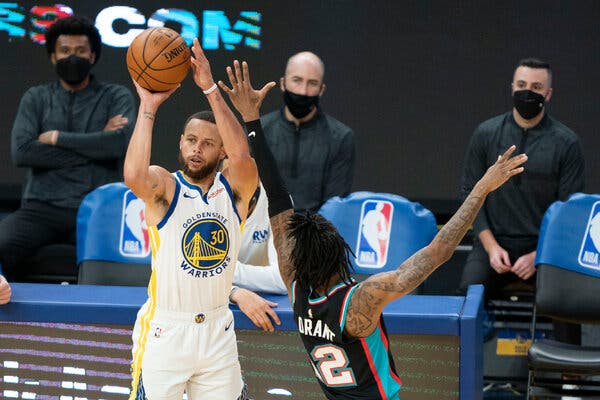 “Hopefully, we all come out fresh, ready to go,” he said.

Some players say they ignore their critics. And then there is Morant, 21, who not only acknowledges his Twitter critics but sometimes responds to them. Last season, after the Grizzlies snapped a losing streak, Morant famously called out “this guy who tweeted” some harsh words about him. “That game right there was for him,” Morant said in a postgame interview.

But Morant is also demanding of himself, and after Sunday’s game, he glanced at a box score and observed that he had shot 7 of 21 from the field, including 1 of 6 from 3-point range. “Very unacceptable,” he said.

It was the final game of a regular season in which Morant was the focus of every opponent’s defensive game plan. Jaren Jackson Jr., the Grizzlies’ starting center, was sidelined until April 21 after knee surgery, and his absence meant that opposing teams could pay Morant even more attention. Morant saw waves of defenders, every night, and he still produced at a high level, averaging 19.1 points and 7.4 assists per game while leading Memphis to a 38-34 record.

“If you only watch clips on social media and the highlights they show on TV, then you’ll have a narrow scope of what type of player he is,” said Brevin Knight, a former point guard who now works as an analyst for the Grizzlies’ television broadcasts. “But for those of us who watch him on a regular basis, the question before the season was: How much better can you make everyone else? You already knew he was faster and more athletic than most people.”

Knight has seen an improvement in Morant’s willingness to penetrate, then stop and knock down short jumpers. Last season, Knight said, Morant seemed to attack the rim whenever possible, to rise above a flotilla of post defenders and dunk (or at least try to dunk) over the top of them. In fact, 45.5 percent of his shot attempts last season came from within the restricted area of the paint. In the process, Knight said, Morant was absorbing an awful lot of contact.

“You’re starting to bring injury into play when you’re trying to get all the way to the basket every time,” Knight said.

Morant has since become more selective about when to elevate for potential highlight-reel plays. This season, a more modest 38 percent of his shot attempts came from within the restricted area. And Morant’s ability to get into the lane and then exercise greater discretion about what he wants to do with the ball has created a more nuanced set of problems for defenders.

“They don’t know if he’s going to go all the way to the basket or stop short,” Knight said. “If guys move up a step to defend him, now he can explode by.”

Or drop a pass off to a teammate. When Morant assembled one of the finest games of his career earlier this month, finishing with 37 points and 10 assists in a 139-135 win over the Minnesota Timberwolves, he practically lived in the paint, attempting just three shots from beyond 10 feet. In a sign of the times, he was still nearly outshone by one of this season’s most compelling rookies, Anthony Edwards, who had 42 points while shooting 17 of 22 from the field.

Morant recently described himself as one of the top five point guards in the league. He has a lot of competition. He does not lack confidence.

He also has room for growth, especially on defense, Knight said, where he tends to look for a window to catch his breath — a common tendency for any young player who handles the bulk of his team’s offensive load.

But the biggest hole in Morant’s game remains his outside jumper. He was a slightly worse 3-point shooter this season (30.3 percent) than he was last season (33.5 percent). And while he has been able to compensate, to some extent, for his struggles on the perimeter, imagine the possibilities if he did not need to compensate for them at all. He could drive past defenders who press up against him and shoot over the top of those who give him too much space. He needs to become just a bit more proficient.

There is only one Stephen Curry in the world, but Morant caught a glimpse of what it looks like when opponents have no choice but to track an all-world scorer from the moment he steps across half-court.

After Sunday’s game, Morant was back on Twitter — this time to campaign for Curry as the league’s most valuable player.

The Nets Could Have Had It All With Dr. J