ST. PETERSBURG, Fla. — The 2020 season wasn’t over yet when Vladimir Guerrero Jr. realized what he needed to do.

He was, by his own admission, overweight. And the effects on the field were apparent: The Toronto Blue Jays moved him across the diamond, from his longtime position of third base to first. He had a hard time scoring from first on a hit in the gap. He struggled to reach low pitches while hitting. He grew tired after fielding 20 ground balls in practice.

So in late September, a few weeks before his team appeared in the playoffs, Guerrero sent a text message to someone he had never met, a private trainer named Junior Rodriguez, and asked to work with him in the off-season. That was the beginning of his journey — with assists from people like his grandmother and Rodriguez — to bounce back from a season not befitting a player of his talent.

“One day, I woke up from bed, looked in the mirror and said, ‘That’s it,’” Guerrero, 22, said in a recent video call with reporters.

Between the playoffs in October and spring training in February, Guerrero shed 42 pounds from his 6-foot-2 frame, dropping to roughly 245 pounds. He is now gliding around the bases, doing the splits to vacuum up low throws at first, feeling spry and performing like one of the best hitters in baseball. Entering Monday, he was hitting .338 with more walks (16) than strikeouts (13), and had reached base an M.L.B.-best 43 times.

He is still eating his grandma’s home cooking — who could say no? — but in smaller portions and with healthier options mixed in, and fewer are late-night meals.

“He looks stronger, and he’s lighter on his feet running and moving around,” Guerrero’s grandmother Altagracia Alvino said in Spanish in a recent phone interview. She added later, “And what pleases me is that he’s continued with his diet.” 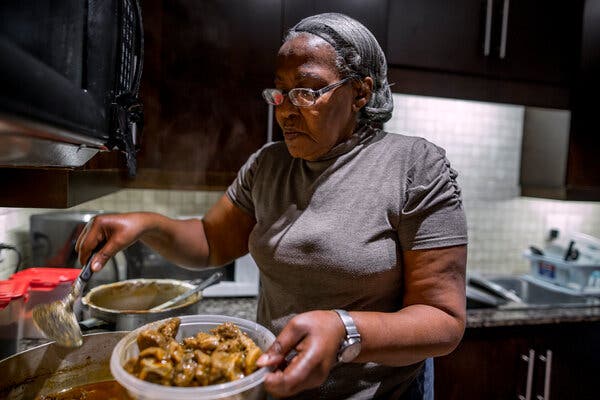 Guerrero’s grandmother Altagracia Alvino has worked with Guerrero to help him maintain his weight loss, but she still fills takeaway containers of her cooking to send to the ballpark with her grandson.Credit…Tara Walton for The New York Times

Alvino would know best. She helped raise her grandson. And much as she did with her son, the Hall of Famer Vladimir Guerrero Sr., Alvino has lived with Vladimir Jr. and cooked Dominican food for him — and for his teammates and opponents — at every stage of his professional career.

Alvino has continued to live with her grandson this season. The 10-11 Blue Jays are using their spring training facility in Dunedin, Fla., as their regular-season home with the United States-Canada border closed for nonessential travel because of the coronavirus pandemic. The Guerreros own a home nearby in Tampa. (And unlike last year, should the Blue Jays relocate to their Class AAA affiliate in Buffalo this summer, Alvino said she planned to accompany Guerrero.)

Since Guerrero was a child, Alvino said, he has had the same body type. With preternatural skills that belied his age, he shot through the minor leagues and was the top prospect in baseball by 19. He reached the majors with much fanfare in 2019 and dazzled fans with his prodigious power during that year’s Home Run Derby.

Over the past few years, though, Guerrero’s weight grew. The Blue Jays had encouraged and worked with him to lose weight — and he did in spurts. But in baseball’s four-month pause last year because of the pandemic, he grew heavier — for which he has said he apologized to his teammates.

“For the last couple years, they knew I was coming here out of shape,” Guerrero told reporters in February. “I didn’t prepare myself very well.”

In the abbreviated 60-game 2020 season, the Blue Jays moved Guerrero to the less demanding position of first base, and often out of the infield entirely, at designated hitter. He posted decent numbers — a .262 batting average, nine home runs, a .791 on-base plus slugging percentage — and helped guide the Blue Jays to their first playoff appearance in four years. But he and his team knew he was capable of so much more.

“Deep down inside, he knew he had a bad year,” Rodriguez said in Spanish in a phone interview. “Not a really bad year, but at a physical level of performance, he was tired of being underestimated and feeling bad.”

At first, Alvino wasn’t quite sure why Guerrero’s weight increased last year. Eating her cooking — she always removes excess fat from any meat she cooks, and sparingly uses oil — Alvino said Guerrero lost some weight. But he then hit a plateau. She said the Blue Jays even asked her if anything had changed, and she insisted nothing had.

Later, though, she said, she poked around and discovered two possible culprits: light beers in the fridge next to the pool table at home, where Guerrero hung out with family and friends, and late-night snacking after she had fed him dinner.

“I told him, ‘My love, what I’m doing with my hands, you’re destroying with your feet,’” Alvino said, repeating a common saying in Spanish.

So in September, Guerrero connected with Rodriguez, a personal trainer who has worked with other major leaguers like Ketel Marte, Ramon Laureano and Santiago Espinal, one of Guerrero’s teammates.

Soon after Guerrero returned to the Dominican Republic following the Blue Jays’ playoff exit, Rodriguez swung by the Guerreros’ home to meet his new client for the first time. Rodriguez felt what would make the biggest difference was getting Guerrero to buy into lifestyle changes, so he was blunt.

And to Guerrero’s credit, he did. For 90 minutes a session, four times a week in the winter, at the gym in Guerrero’s house, Rodriguez trained Guerrero. He guided him through stages of conditioning, stretching, weight lifting and jumping exercises, focusing on improving any physical limitations. For example: Rodriguez said the lack of range of motion in Guerrero’s torso dampened his power.

“It’s been a change of 180 degrees,” Rodriguez said. “This is a very different Vladimir.”

Away from the gym, Guerrero became more disciplined — and the people around him helped. He increased his water intake. He stopped snacking after dinner. No more alcohol, fried food or sugar. He slashed his portion sizes, something Alvino said she had to get used to. She said a longtime family friend who also cookshas also kept an eye on the portions.

Alvino said she made Guerrero a cucumber-green apple-celery juice before the morning workouts and a papaya-oatmeal-cinnamon shake in the evenings. Lunch was the biggest meal of the day. Although Guerrero never ate a lot of rice, Alvino said, she started using a smaller spoon to serve him. He still got a normal amount of her stewed beans, his favorite, and meat or fish.

Guerrero still takes Alvino’s traditional Dominican meals to the stadium to share. If he is hungry after night games, she makes him a small meal of grilled chicken or fish and vegetables. (And if she makes mangú, a dish of mashed boiled plantains, she said, she uses water and milk but not butter.)

Guerrero said in a recent video call with reporters that his body felt “really different” now and that he was proud of his off-season work. He said he planned to stick with the current regimen for the rest of his career. At the plate, he said, he felt better than at the height of his minor league career (he once hit .381 in a season). And even though he had originally hoped to return to third base, he said he was happy playing wherever the Blue Jays needed him.

“I can do a lot of things I couldn’t do before and, thank God, I feel very comfortable at the weight I’m at,” he said.

His lighter weight and healthier lifestyle have contributed to better play this season. Credit…Mary Holt/USA Today Sports, via Reuters

Blue Jays Manager Charlie Montoyo said a fitter Guerrero had shown improvement in every aspect of his play on the field. Guerrero is hitting the ball even harder than usual this year, trailing only a handful of stars like Ronald Acuña Jr. of Atlanta and Giancarlo Stanton of the Yankees in that category.

“He’s back to being Vladdy, smiling in the dugout, having fun,” said shortstop Bo Bichette, who has played alongside Guerrero since they were teenagers and believed his friend had the ability to be the best hitter in baseball. “I haven’t seen him get out and smile about his outs since Double-A, and he’s been doing that a lot because he knows he’s going to get them at some point.”

The baseball season, though, is arduously long and tests everyone. Rodriguez said he continually sends Guerrero reminders to stay on top of his routine. Montoyo wasn’t planning on doing the same.

“He’s on a mission, and he doesn’t need any help right now,” he said of Guerrero. “He knows what he needs to do and he’s doing it.”

With Her Candor, Osaka Adds to Conversation About Mental Health