DALLAS — The Dallas Mavericks are one of only four teams to win the first two games in the N.B.A. finals and still lose the series. It was always assumed thereafter that, for this franchise and its fans, no playoff collapse could inflict as much pain as Dallas’s disintegration against the Miami Heat in 2006.

Chances are the sentiment still applies, since a first-round series will never be confused with a championship series, but the Luka Doncic-led Mavericks are suddenly careening toward a doozy of an unraveling that might wind up in the same conversation.

After seizing a 2-0 lead over the Los Angeles Clippers, with back-to-back road victories that had the league buzzing, Dallas welcomed crowds of nearly 18,000 fans on Friday night and Sunday night at American Airlines Center — and promptly disappointed them both.

The series now resting at 2-2 is even worse than it sounds for the Mavericks, because they amassed a 30-11 lead in the first quarter of Game 3 that could have easily caused the Clippers, on the brink of a full-blown franchise crisis, to capsize. Two defeats later, and with Doncic clearly compromised by a neck strain he sustained during Game 3, Dallas has been forced to confront the painful reality that it actually squandered more than a 2-0 lead.

“We’ve got to hope in the next couple of days that he can be better — hopefully substantially better,” Mavericks Coach Rick Carlisle said of Doncic’s health. “There’s a two-day break between games, which is a positive in this case.”

An extra day off before Wednesday’s Game 5 back at Staples Center in Los Angeles was the lone positive Carlisle could realistically pinpoint.

Fueled by Coach Tyronn Lue’s small-ball lineups, stout team defense in Sunday’s 106-81 rout in Game 4 and, most of all, relentless paint attacks from Kawhi Leonard and Paul George, the Clippers have mustered a show of unity and resolve that maybe no one in the N.B.A. outside of Lue expected.

Leonard, in particular, has been as dominant as ever offensively in response to last week’s chatter about Doncic’s emergence as the best player in the series, averaging 33.0 points per game on ridiculous 62.7 percent shooting from the field.

Mocking the Clippers’ moxie had evolved into a sport within the sport since their collapse against the Denver Nuggets in last summer’s bubble playoffs at Walt Disney World in Florida.

On the brink of a Western Conference finals showdown with the Los Angeles Lakers, their storied Staples Center co-tenants, the Clippers went from a 3-1 cushion to a second-round exit by losing three consecutive games to Denver. Coach Doc Rivers was fired and the rigors stemming from the isolation of bubble life were blamed.

But then the Clippers appeared to go out of their way to lose their final two games this season to lowly Houston and Oklahoma City, locking in the first-round matchup they preferred with Dallas and ensuring that they would avoid the Lakers until the conference finals.

When Doncic and the Mavericks shredded the Clippers twice in Los Angeles to open the series, Lue and his players were lampooned for messing with basketball karma and, worse, reinforcing perceived frailties as a group that could potentially convince Leonard to leave the club in free agency this summer. 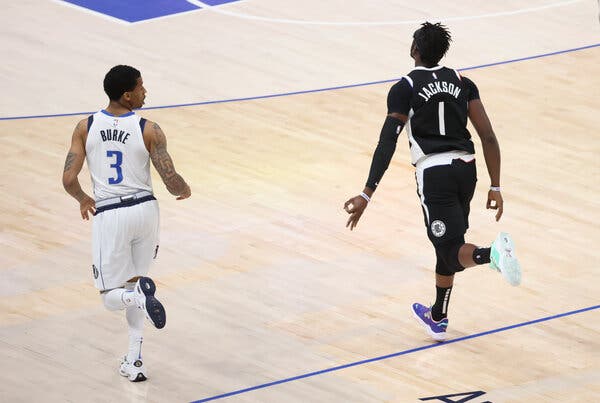 Reggie Jackson, in the Clippers’s starting lineup for his ball-handling and shooting, scored 15 points in Game 4.Credit…Kevin Jairaj/USA Today Sports, via Reuters

Lue responded with his best work since his coaching contributions to the Cleveland Cavaliers’ historic comeback from a 3-1 deficit in the 2016 N.B.A. finals to Golden State.

He made the 6-foot-8 Nicolas Batum his primary center in hopes of keeping more mobile players on the floor to cope with the brilliant Doncic, who averaged 38.0 points through the first games before his 9-for-24 shooting struggles and quiet 19 points on Sunday.

Lue also made Reggie Jackson a starter in the backcourt for a boost in shooting and ball-handling and expanded roles for Rajon Rondo and Terance Mann, even though that meant relegating the boisterous Patrick Beverley, his original starter at point guard, out of the rotation.

Lue admitted that the Clippers want to “try to wear Luka down” and “let him play one on one” by switching defenders on him constantly, and living with the results as long as they can “keep his assists down.”

The smaller, quicker lineups likewise exacerbated the mobility issues that have plagued Dallas’ Kristaps Porzingis defensively since Porzingis, who tore the anterior cruciate ligament in his left knee as a Knick in 2018, sustained a meniscus tear in his right knee in last season’s first-round series against the Clippers.

“We still haven’t done anything yet,” Lue said.

A reserved approach is wise in a series in which the home team has yet to win a game, and when Dallas is 3-0 on the Clippers’ floor this season. But there is a strong case to be made that the Mavericks won the first two games thanks as much to their unsustainable success from 3-point range as to the damage Doncic caused at full strength.

The Mavericks shot 35-for-70 from deep in those two games, then cratered to 5-for-30 on 3-pointers in Game 4, with Doncic’s supporting cast fading badly, after wasting a 20-for-39 showing in Game 3.

Carlisle said that, from his vantage point, Doncic’s injury left him unable to “turn his neck to the left.” That would help explain the lack of zip in his game and Doncic’s joyless expression from the start, with strips of black protective tape from the back of his neck and across his left shoulder protruding from his uniform.

Doncic is shooting 40.6 percent from the free-throw line.Credit…Jerome Miron/USA Today Sports, via Reuters

There is another growing worry for the Mavericks on top of their star guard’s uncertain health: Doncic’s free-throw shooting. He shot 0-for-5 from the line in Sunday’s loss, taking the All-Star guard down to an indefensible 40.6 percent (13 for 32) for the series.

“I don’t think that matters right now,” Doncic said of his injury. “I played terrible.”

The Mavericks of 2005-6, who orbited around Dirk Nowitzki, avenged their finals collapse by beating Miami in the 2011 N.B.A. finals after the Heat had signed LeBron James and Chris Bosh to flank Dwyane Wade. Dallas, though, has not won a single playoff series since. These Mavericks came home after stunning the host Clippers twice, believing they had a shot at a sweep to end that drought, given the Clippers’ recent history of folding, and lost all the momentum.

N.B.A. teams that lose the first two games at home in a best-of-seven series have rallied to win only four times in 31 tries.

The Mavericks know how unlikely the feat is because they pulled it off it in the Nowitzki era in 2005, falling into a 2-0 hole before completing the comeback with a 40-point humiliation of the Houston Rockets in Game 7. Alas, in that series, Dallas had the luxury of playing the deciding game on its own floor after its dreadful start.

The Clippers have reclaimed home-court advantage in this series and, more worryingly for Dallas, seem to be enjoying themselves for the first time in a long time after so much doomsday talk.

George said he and Leonard did “an incredible job complementing each other” in Dallas and described the victories as two prime examples of “ultimately what we wanted to get to” as a partnership.

Donaldson Is Credited With Baseball’s Two Millionth Run (for Now)