Madison Bumgarner took the mound in Atlanta on Sunday afternoon for a game that was scheduled to last seven innings. Bumgarner went the distance for the Arizona Diamondbacks to beat the Braves, 7-0. His official statistics will reflect a victory, a shutout and a complete game — but not the distinctive part of the achievement.

Bumgarner threw a no-hitter. Kind of.

In an effort to speed the proceedings during the coronavirus pandemic, Major League Baseball declared last season that games played as part of a doubleheader would last only seven innings instead of nine. Sunday was the first time since then that a pitcher has tossed a no-hitter in a doubleheader — except it won’t count as one.

The league said on Sunday that it would abide by the definition of the Elias Sports Bureau: “No-hitters by teams and individuals shall not be credited in scheduled seven-inning games, unless the game goes to extra innings and the team (or individual in a complete game) pitches at least nine innings and does not allow a hit.”

Just don’t tell that to the Diamondbacks.

“It was a seven-inning game and we gave up no hits in seven innings,” catcher Carson Kelly said. “That’s how I’m going to look at it. Whether the league says ‘unofficial,’ whatever it is, I believe it’s a no-hitter. We were told we were playing seven and he took care of business.”

For Bumgarner, who starred in three World Series for the San Francisco Giants in the 2010s, it was easily the best start in his two seasons with the Diamondbacks, who signed him to a five-year, $85 million contract in December 2019. He had been 2-6 with a 7.16 earned run average in 13 Arizona starts, none lasting even six innings.

Against the Braves — who managed just one hit off Zac Gallen in the first game of the doubleheader — Bumgarner was dazzling. He faced the minimum 21 hitters, striking out seven and allowing only one base runner, Ozzie Albies, who reached in the second on a throwing error by shortstop Nick Ahmed and was promptly erased on a double play.

“He basically was perfect for seven complete innings,” Arizona Manager Torey Lovullo said. “So it’s a no-hitter for me, and it will be forever. I don’t know what the rule book’s going to say and I don’t know if Major League Baseball’s going to recognize it. But for what’s going on in that room right now, for the special feeling that Madison gave us today — it was a no-hitter.”

Bumgarner, 31, has thrown four one-hitters, including three that were no-hitters through seven innings. He said on Sunday that he probably could have completed it this time.

“I mean, I would have tried,” he said, adding that there were too many variables to know for sure. “If it works for seven, it’s hard to imagine it not working for two more.” 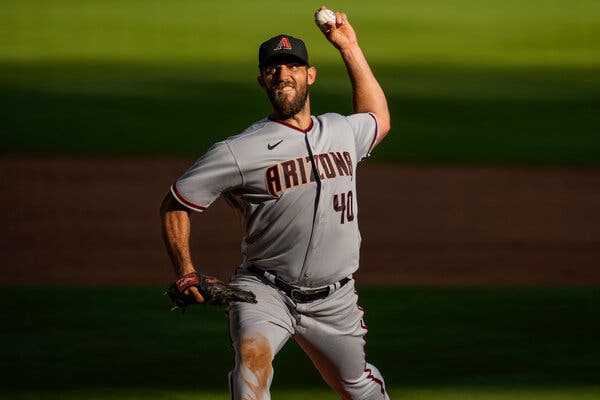 Bumgarner was not as emphatic as his catcher and manager about how to classify his performance. But he did not dismiss its significance.

“I didn’t give up any hits today,” he said. “I’m not in control of how many innings we’re playing. I like the seven-inning doubleheader thing. I don’t know.”

Baseball attempted to sort all this out in 1991 with a special committee for statistical accuracy chaired by then-Commissioner Fay Vincent. To be an official no-hitter, a game would have to meet with this simple and narrow definition: “a pitcher or pitchers had to pitch a complete game of nine innings or more without allowing a hit.”

With that, dozens of no-hitters were redefined as “notable achievements” in the Elias Book of Baseball Records. Many had been shortened by rain, including a five-inning no-hitter by Montreal’s Pascual Perez in 1988 and a six-inning performance in 1990 by his brother, Melido, for the Chicago White Sox.

More recently, a Boston rookie, Devern Hansack, threw a rain-shortened five-inning no-hitter on the final day of the 2006 season. Like the others — and Bumgarner’s — it is not among the 307 games that meet the current definition.

Adam Darowski, the head of user experience for Sports Reference — which runs Baseball Reference — tweeted on Sunday that because Bumgarner’s game reached its “pre-established end point” with no hits allowed, it should be a no-hitter. By that definition, he added, two other games should be counted as no-hitters: eight-inning no-hit losses by the Yankees’ Andy Hawkins in 1990 and the Red Sox’ Matt Young in 1992. Both of those games were on the road, so the winning team did not bat in the bottom of the ninth.

However you classify Bumgarner’s game on Sunday, it was meaningful to a three-time champion who showed he has not lost his inner ace.

“It’s got to be up there,” Bumgarner said, when asked where the moment ranks for him. “I’m pretty proud of it, for sure.”

2021 French Open: What to Watch on Friday