European soccer’s governing body will hold talks with the British government on Monday about moving this month’s Champions League final to London because travel restrictions related to the coronavirus have made it almost impossible for domestic fans of the finalists — the Premier League rivals Manchester City and Chelsea — to attend the match at its scheduled site in Istanbul.

The final, currently set for Istanbul’s Ataturk Olympic Stadium on May 29, is the biggest day on the European club soccer calendar and like the Super Bowl and the Wimbledon final one of the tent-pole events in global sports every year.

Questions about where to hold the match have been growing since Turkey announced a lockdown late last month. They intensified on Friday, days after City and Chelsea clinched their places in the final, when the British government announced that Turkey was among the countries to which Britons should avoid all but essential travel.

Officials from England’s Football Association already have opened talks with Europe’s governing body, UEFA, about moving the game, and they will be present at Monday’s meeting, when UEFA will outline its requirements for relocation. A decision most likely will be announced within 48 hours.

If an agreement cannot be reached to move the final to London, a backup choice will be considered, most likely Porto, Portugal.

UEFA’s demands are likely to present a dilemma for the British government, which will have to balance the popular appeal of bringing a major sporting event featuring two English teams to the country against the ongoing public health need to control the virus.

Among its demands, UEFA is expected to request that Britain waive quarantine requirements so its staff members, international broadcasters, sponsors, suppliers and officials can adjust their plans and attend the game.

UEFA also is seeking guarantees about spectators. Fans will start attending soccer games in England later this month, but that figure is capped at 10,000, a number that is far lower than the 25,000 fans that Istanbul had said it could accommodate. The British government relaxed that rule by saying 20,000 can attend the F.A. Cup final on May 17 at London’s Wembley Stadium. UEFA will demand a similar accommodation.

English officials already have indicated to UEFA the game can be played at Wembley, even though the stadium is already booked to stage promotion playoffs for the lower leagues that week. Those matches will be relocated to new venues or played on different dates. Two Premier League clubs have approached UEFA about staging the Champions League final at their stadiums, but UEFA is expected to insist that if the game is to be moved to England it will have to be played at Wembley, a neutral venue familiar to both clubs and one that satisfies UEFA’s requirements for hosting major games. 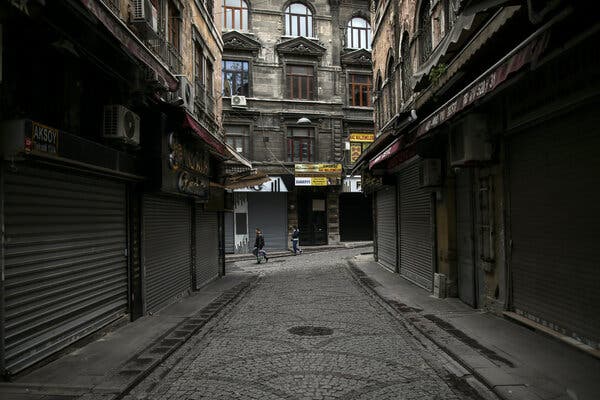 A market street in Istanbul, where a strict lockdown has closed shops in an effort to slow the spread of the coronavirus.Credit…Emrah Gurel/Associated Press

The decision would mean pulling the game from Istanbul for the second year in a row. Last year’s decisive Champions League matches — the tournament was postponed on the eve of the quarterfinals last spring because of the spreading coronavirus pandemic — were played in a so-called bubble environment in Lisbon. They were moved only after Turkish officials had agreed to surrender their coveted role as host of the final in exchange for a promise that Istanbul would host the final this year.

Officials in Portugal have told UEFA that they could accommodate this year’s final on short notice, too, perhaps in Porto, after the British government on Friday included Portugal in a list of countries its citizens could travel to without having to quarantine upon their return.

Turkey recently entered a new lockdown amid a rise in virus cases, and was placed on the red list, a group of countries for which travel from Britain is actively discouraged. Turkey, a popular destination for British tourists, had said it would lift its lockdown on May 17, 12 days before the Champions League final, but government officials had warned soccer fans to stay home.

“First of all, it does mean with regards to the Champions League, fans should not travel to Turkey,” Grant Schapps, the British lawmaker responsible for transport, told a news conference after announcing the new regulations for travel in and out of Britain.

Making matters more complicated is a 10-day quarantine requirement for individuals who return to Britain after being given cleared to travel from red list countries. That would mean more than a dozen players on both squads potentially being ruled out of preparations for the European Championship, the quadrennial Continent soccer championship, that begins on June 11.

“We are very open to hosting the final but it is ultimately a decision for UEFA,” Schapps said, adding, “Given there are two English clubs in that final, we look forward to what they have to say.”

For UEFA there is sympathy for Turkey, which now faces losing the final for the second straight year. One option being considered to appease Turkish officials is an offer for the final to be played in Istanbul in 2023, to coincide with the centenary of the Turkish republic.

Both Manchester City and Chelsea would have brought large traveling parties and potentially thousands of fans to Turkey for the game, in addition to the hundreds of journalists and others who normally attend the final. Their supporters from outside Britain — who might have been allowed to attend the match in Turkey — most likely will not be included in the eased travel restrictions if the game is played in England.

Manchester City, on course to clinch its third Premier League title in four years this weekend, claimed its first berth in the final on Tuesday, when it eliminated Paris St.-Germain, a finalist last summer in Lisbon.

Chelsea, which won the Champions League in 2012, earned its place a day later by ousting Spain’s Real Madrid.

In a quirk of the Premier League schedule, City and Chelsea met in a league game on Saturday in Manchester, with Chelsea delaying City’s domestic championship celebrations by securing a 2-1 victory.

A Wrenching Knicks Loss, but an Electric Night at the Garden