The N.B.A. playoffs have turned into a battle of attrition as the league grapples with a growing list of injuries to many of its biggest stars. No less an eminence than LeBron James, whose Los Angeles Lakers made a hasty first-round exit after his All-Star teammate Anthony Davis injured his knee (and then his groin), weighed in on Wednesday, blaming the league’s compressed schedule. Regular-season games began in December after an abridged off-season.

“They all didn’t wanna listen to me about the start of the season,” James wrote on Twitter. “I knew exactly what would happen.”

It is worth noting that the league and its players’ union agreed on the schedule.

But injuries were a problem for many N.B.A. teams even before the start of the playoffs — the Denver Nuggets, for example, were left without Jamal Murray, their starting point guard, when he sustained a season-ending knee injury in April — and a fresh batch of injuries in the postseason has only amplified the issue. In fact, with two-plus playoff rounds remaining, the N.B.A. has already set an ignominious record: eight All-Stars (and counting, perhaps) have missed at least one postseason game.

Here is a look at those players, and how their injuries and absences have affected their teams: 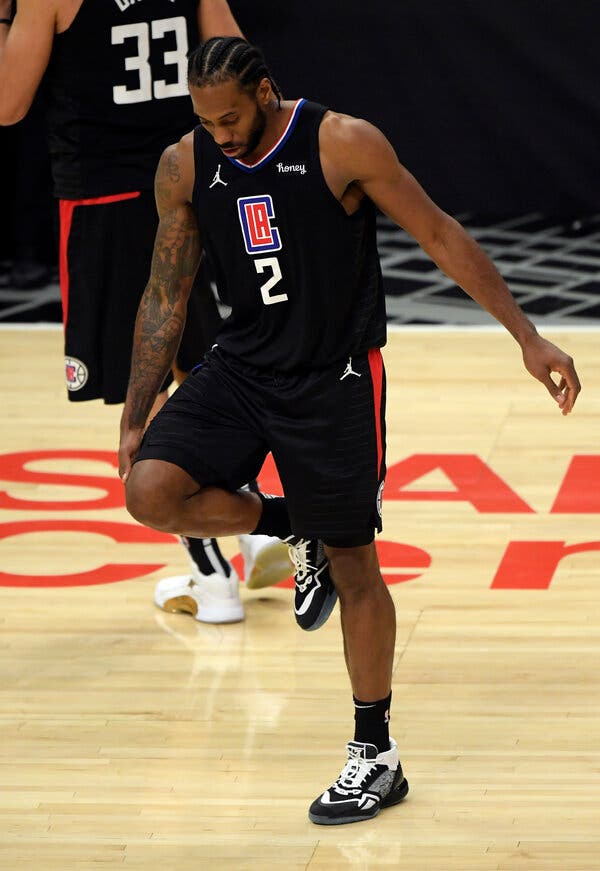 Kawhi Leonard sat during the end of Game 4 against the Utah Jazz on Monday with knee soreness.Credit…Kevork Djansezian/Getty Images

Injury: Leonard was huge for the Clippers on Monday in Game 4 of their Western Conference semifinal series against the Utah Jazz, finishing with 31 points and 7 rebounds in a win that evened the best-of-seven series at two games apiece. But the Clippers’ victory proved costly: Leonard sprained his right knee.

Impact: Leonard was expected to miss Game 5 on Wednesday night, and the Clippers did not offer a timetable for his return. One of the top two-way players in the league, Leonard is vital to the Clippers’ championship hopes. There is also a sense of urgency for the franchise, which has never made a conference final and had been banking on the star-studded pairing of Leonard and Paul George to help deliver its first title: Leonard can opt for free agency after the season. Another playoff disappointment could figure in his decision. The Clippers would prefer that they not have to find out.

Injury: After helping the Lakers win it all last season, Davis stumbled through the 2020-21 regular season, missing about two months with a calf strain. It only got worse for him in the Lakers’ first-round series with the Phoenix Suns, as he injured his knee and his groin.

Impact: Despite spraining his left knee in Game 3 against the Suns, Davis played through pain to deliver a win. But he strained his groin in Game 4, then missed Game 5. He limped through the early stages of Game 6 before heading to the locker room in pain, and the Lakers lost the game and the series without him. The Lakers had hoped to mount a stronger title defense. Davis blamed himself. “We just couldn’t stay healthy,” he said. “A lot of that is on me.

Harden played with a strained hamstring in Game 5 against the Bucks. He scored just 5 points.Credit…Adam Hunger/Associated Press

Injury: It took less than a minute for Harden, holding his hamstring, to leave Game 1 of the Nets’ second-round series against the Milwaukee Bucks. Harden missed the next three games before making a last-second decision to play in Game 5 Tuesday night. Strain to the same hamstring caused Harden to miss most of the last month of the regular season.

Impact: The Nets’ top three stars — Harden, Kevin Durant and Kyrie Irving — played only eight games together during the regular season. Harden is one of the most productive scorers in N.B.A. history, and he was largely ineffective in his return on Tuesday night in Brooklyn, with just 5 points and one made field goal. Without Harden’s shooting and playmaking ability, and combined with the loss of Irving, the Nets’ path to a championship becomes much more difficult. Harden is, however, expected to play in Game 6 on Thursday in Milwaukee.

Kyrie Irving landed on another player’s foot and sprained his ankle.Credit…Stacy Revere/Getty Images

Injury: During the second quarter of Game 4 against the Bucks, Irving sprained his right ankle when he landed on Giannis Antetokounmpo’s right foot after a layup. He is out indefinitely.

Impact: Losing just Irving, given the Nets’ depth, probably would be a storm the team could weather. But his loss combined with Harden’s problematic hamstring, makes the Nets much more vulnerable. It puts pressure on Durant to produce historic numbers like he did in Game 5 against the Bucks (49 points, 17 rebounds, 10 assists). But even without Irving, the Nets, as they showed Tuesday night, may be deep enough to get by without him if role players like Jeff Green continue to show up.

Embiid has missed just one game with a small lateral meniscus tear, but the injury has also negatively affected him when he’s played.Credit…Tim Nwachukwu/Getty Images

Injury: Sidelined with a left knee bone bruise for a couple of weeks during the regular season, Embiid sustained a small lateral meniscus tear in his right knee in the 76ers’ first-round series with the Washington Wizards.

Impact: Despite the apparent severity of his injury, Embiid has been out only once — Game 5 against the Wizards, which the 76ers won to close the series. He was terrific at the start of their conference semifinal series with the Atlanta Hawks, averaging 35.3 points and 10.3 rebounds per game as the 76ers took a 2-1 series lead.

He struggled, though, in a Game 4 loss, shooting 4 of 20 from the field, including 0 for 12 in the second half. He acknowledged afterward that his knee was bothering him. “As far as being 100 percent, I don’t think that’s going to happen until the year is actually over,” Embiid told reporters. “I just got to go out and manage it.”

Utah Jazz guard Donovan Mitchell (45) is helped off the court after injuring his ankle.Credit…Russell Isabella/USA Today Sports, via Reuters

Injury: Mitchell missed the last 16 regular-season games and Utah’s playoff opener against the Memphis Grizzlies because of a sprained right ankle.

Impact: The Jazz lost their first playoff game against Memphis without Mitchell. After Mitchell returned for Game 2, the Jazz dominated the series. Mitchell averaged 28.5 points and 5.8 assists in four games on 45 percent shooting. In Utah’s second-round match up against the Clippers, Mitchell has been even more dominant, with 37.3 points a game on 46.8 percent shooting through the first four games.

Mike Conley’s absence leaves the Jazz without one of their key scorers beyond Donovan Mitchell.Credit…Rick Bowmer/Associated Press

Injury: Conley has not played in Utah’s semifinal series against the Clippers because of a right hamstring strain. He also missed 20 games during the regular season because of injuries or rest related to that hamstring.

Impact: Conley, when healthy, is the starting point guard for the Jazz. On a team that sometimes is too reliant on Mitchell to make plays, Conley is another player who can help break down defenses to take the pressure off Mitchell. During the regular season, Conley made his first All-Star appearance and averaged 16.2 points and 6 assists per game on 44.4 percent shooting, placing him firmly in the upper tier of N.B.A. guards.

Injury: The Celtics announced on May 10 that Brown would miss the end of the regular season and the entire postseason because of a torn ligament in his left wrist.

Impact: Brown established himself as a star this season, with averages of 24.7 points and 6 rebounds per game. He also made his first All-Star team. But his presence likely would not have made much of a difference in the playoffs, where the Celtics lost to the heavily favored Nets in the first round in five games.

Avalanche Are Cup Favorites, but Even the Islanders Can Dream