The N.F.L. said it would scrap the use of a disputed race-based method of evaluating dementia claims made by former players in the league’s concussion settlement and pledged to evaluate for evidence of bias the hundreds of claims that had already been filed.

The announcement came several months after the federal judge overseeing the roughly $1 billion settlement ordered the league and lawyers representing the 20,000 former players who are covered by the agreement to review the use of separate standards for evaluating dementia in white and Black players.

In August, two retired Black players, Kevin Henry and Najeh Davenport, filed a civil rights suit and a suit against the seven-year-old settlement that accused the league of “explicitly and deliberately” discriminating against Black players by using separate race-based benchmarks to determine their eligibility for dementia-based payouts, which can be worth hundreds of thousands of dollars.

The judge dismissed their suits, but the cases brought light to the evaluations and prompted members of Congress to request data from the N.F.L. to determine whether Black players were being discriminated against. They also prompted an ABC News report and led more than a dozen wives of Black retired N.F.L. players to send the judge in the case a petition with nearly 50,000 signatures calling for an end to race-norming.

As it has in previous responses, the N.F.L. denied that the use of the race-based norms was discriminatory. But in a statement Wednesday, the league said it was committed to eliminating the use of those norms and finding race-neutral alternatives with the help of specialists in neuropsychology. While those new measures have not been identified, the decision to review old dementia claims under new assessment tools could mean that potentially hundreds more players will receive payments from the settlement.

“Everyone agrees race-based norms should be replaced, but no off-the-shelf alternative exists, and that’s why these experts are working to solve this decades-old issue,” the league said. “The replacement norms will be applied prospectively and retrospectively for those players who otherwise would have qualified for an award but for the application of race-based norms.”

While some former players have blamed the N.F.L., some have also taken aim at Christopher Seeger, the lead lawyer for more than 20,000 former players, who the players say knew about the abuse of race-based benchmarks as early as 2018 and did not address the issue. Lawyers for Henry and Davenport, the two former players who accused the league of discrimination, asked the court to replace Seeger in March. 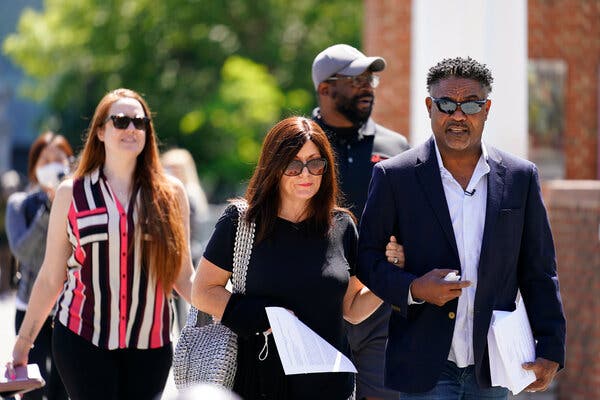 The former N.F.L. players Ken Jenkins, right, and Clarence Vaughn III, center right, and their wives, Amy Lewis, center, and Brooke Vaughn, left, carried petitions demanding an end to the use of race-based benchmarks in the N.F.L. concussion settlement to the federal courthouse in Philadelphia in May.Credit…Matt Rourke/Associated Press

In a statement also released on Wednesday, Seeger apologized for not having recognized the problems caused by the use of separate benchmarks for Black and white players.

“I am sorry for the pain this episode has caused Black former players and their families,” Seeger said. “Ultimately, this settlement only works if former players believe in it, and my goal is to regain their trust and ensure the N.F.L. is fully held to account.”

That trust may take time to rebuild. Lacey Leonard, whose husband, Louis, 36, played for six teams over five seasons, said Seeger’s apology was not enough. Leonard received a settlement after filing a dementia claim because he has a host of cognitive issues, including memory loss, anger and depression. When the claims auditor found no problems with Leonard’s claim, the N.F.L. appealed the settlement, and his claim was reversed.

“Honestly, it was a half apology,” Lacey Leonard said in a phone interview. “I think the N.F.L. owes more to disabled players. It’s disheartening that in 2021 that we are still fighting systemic racism.”

The N.F.L. did not say how long it would take for the league, Seeger and the panel of experts to create a new system to evaluate dementia claims. More than $800 million in claims has already been approved by the settlement administrator for a range of neurological and cognitive diseases. That number could increase significantly if many dementia claims that were initially rejected are reversed and approved.

It is unclear how many Black players may have been misdiagnosed or had diagnoses that were overturned. More than 7,000 former players took free neuropsychological and neurological exams offered in the settlement. Some of them were told they did not have dementia and might be unaware of how their exams were scored.

Cyril Smith, a lawyer for Henry and Davenport, asserted that white players’ dementia claims were being approved at two to three times the rate of those of Black players. But Smith was unable to substantiate his claim because, he said, Seeger and the N.F.L. had not shared any data on the approval rates for dementia claims by white and Black players.

Seeger said that data would be released when new tests for dementia claims and an investigation looking at whether players were discriminated against had been submitted to the court.

The Game of Tomorrow, Today