That’s all we got from Naomi Osaka as she bowed out of the French Open on Monday after causing a ruckus over her plan to skip post-match news conferences.

She did not speak those sentences. They were posted on her Instagram account. Nor did she provide anything like deep explanation. A global icon at age 23, Osaka left unclear when she would return to the women’s tour. She revealed for the first time that she had struggled with depression since beating Serena Williams in a controversy-cloaked final at the United States Open in 2018.

That was all she needed to rock the sports world and to provide another lesson in the increasing power of athletes to own their message and set their terms.

She waded briefly into the water, made a splash and stepped away.

Using social media posts, Osaka called out one of the most traditional practices in major sports: the obligatory news conference, vital to reporters seeking insight for their stories, but long regarded by many elite athletes as a plank walk.

After monumental wins and difficult losses, Osaka has giggled and reflected through news conferences and also dissolved into tears. In Paris, she said she wanted nothing to do with the gatherings because they had exacted a steep emotional toll.

So in her slim social media posts she sent a message with significant weight:

The days of the Grand Slam tournaments and the huge media machine behind them holding all of the clout are done.

In a predominantly white, ritual-bound sport, a smooth-stroking young woman of Black and Asian decent, her confidence still evolving on and off the court, holds the power.

Get used to it.

Intentionally or not, Osaka stands at the leading edge of a broad, transformational movement in athlete empowerment. What she does with this role will say a great deal about the power shift, for better or worse.

This much is clear. By walking away from the French Open as she did, Osaka became an obsession in the sports world and far beyond.

Pundits, fans, fellow players and people who typically care little about athletes are analyzing her motivations. They worry about her future in tennis and, of course, her mental health.

They project what they want onto her and argue accordingly.

Some commentators say the press goes too far in dissecting athletes. Others say that Osaka is somehow symbolic of a new, far-too-coddled breed of star.

Still others suggest she struggles from being racially isolated, the rare champion of color in a tennis world dominated by fans, officials and a press corps that is overwhelmingly white.

One social media post, assessing Osaka’s refusal to play beyond the first round of the French Open, compared her to Malcolm X.

And yet, once again, as befits a celebrity in our times, Osaka hewed to a minimalist approach. Thirteen sentences, just under 350 words, are all that exist for fans and foes to parse.

It is impossible to know the depth of Osaka’s internal anguish.

But we do know she has had difficulty coping on the world stage at a young age.

“The truth is that I have suffered long bouts of depression since the US Open of 2018 and I have had a really hard time coping with that,” she wrote, before noting that she often wears headphones during tournaments to “dull my social anxiety.”

She arrived in France committed to drawing a line and engaging in a power play with tennis officials who have a difficult time with anything that disrupts the status quo.

When Osaka took to social media last week and announced she wasn’t going to attend post-match news conferences, the game’s power brokers got their backs up, fined her $15,000 and threatened her with suspension.

Did she quit to get back at them, to show that she has the clout, and not them?

We don’t know because Osaka didn’t elaborate, and she definitely isn’t speaking to reporters.

That’s fitting — and unnerving to a journalist — because like so many of the biggest stars in modern sports, Osaka is now much more than an athlete.

She lives in the world of celebrity inhabited by her idol, Serena Williams. Osaka is famed not just for the four Grand Slam titles she has won since 2018 or because the $37.4 million she earned in the past year made her the highest-paid female athlete in the world. 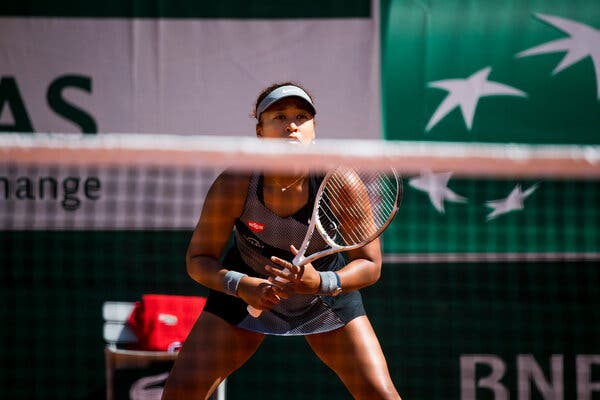 Her background — raised primarily in the United States by a Japanese mother and an Afro-Haitian father — gives her a potent allure. Add to the mix a disarming personality and a willingness to enter the fray on social issues that emerged during the pandemic, and she has become tennis’s newest supernova.

So it comes as no surprise that she feels less need to deal with the traditional press.

Such is the way of the modern celebrity — be they an athlete, an entertainer, a business tycoon or a political leader. They are all looking for workarounds, ways to tell their stories as they prefer, usually in short bursts, offering small tendrils of their lives and their opinions, their triumphs and pain, often without the depth that comes from great journalism.

It wasn’t always this way. Think about and the powerful insights he gave in interviews with David Frost — meditations in which Muhammad Ali opened up about race, power, civil rights and the Vietnam War. In tennis, Billie Jean King and Arthur Ashe would speak at length about the most pressing topics. You knew not only where they stood, but also about their motivations, the evolution of their thinking and their visions of the future.

Athletes still speak out, but they tend to do so on their own terms — very often limited to 280 characters on Twitter.

One of the highlights of sports in 2020 was Osaka’s willingness to go against the grain in tennis and take a stand against racial injustice. She decided not to play one day at a tournament last summer to protest the police shooting of Jacob Blake in Wisconsin, saying on social media, “Before I am an athlete, I am a black woman.”

Point made. Message delivered. The tournament paused for a day, allowing Osaka to keep her promise without defaulting.

She then went to the U.S. Open and again seized the conversation. This time it was with the masks she wore — adorned with the names of victims of police violence — as she took to the court for each of the seven matches she played on her way to winning the tournament.

“What was the message you wanted to send?” she was asked.

“Well, what was the message that you got?” she replied, in a way that was heartfelt, simple and profound. “I feel like the point is to make people start talking.”

And that was it. She seized the moment with a snippet, directed the conversation by giving up little, and by turning the question back on itself.

What was the message that you got? What do you, the fan, the reporter in the media scrum, the casual observer, see in me?

Whatever it is, deal with it.

She said much the same this week in Paris, delivered this time in 13 spare sentences. A strong statement, no doubt, and one that fits with the tone and technology of the present day, but count me among those who want to hear more.