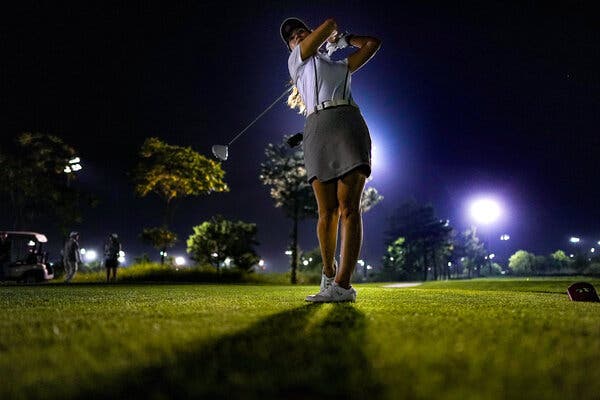 City lights shimmer in the distance.

Shadows splay in every direction on glowing green grass.

It’s close to midnight, the moon hangs high in the dark night sky, and South Koreans are still outside, golfing.

This is “white night” golf, a nocturnal sports phenomenon in South Korea that reflects the still surging popularity of the sport there, the persistent challenges many encounter in nabbing a tee time in the country’s dense cities, and the lengths some will nevertheless go to get one.

South Korea is the third-largest market for golf in the world, behind only the United States and Japan.

For golf fans worldwide, the game’s grip on the country is most easily observed in its surplus of elite professional players, particularly in the women’s game. As of last week, 32 of the top 100 players in the women’s world rankings, including 4 of the top 10, were from South Korea.

But on the ground, golf is very much a participatory pastime, even if the popularity of the sport and the undersupply of courses in metropolitan areas make opportunities to actually play scarce and expensive. Seoul, a city of nearly 10 million people, has only one course, and it is open only to military personnel.

Some make do with screen golf, a virtual simulation game played indoors, which has become its own booming pastime in South Korea, with some facilities offering 24-hour service.

But golfers understandably desire the real thing. So what do you do when the demand for tee times outstrips the sunlight in a given day?

According toSeo Chun-beom, president of the Korea Leisure Industry Institute, South Korea now boasts a whopping 117 golf courses of 18 holes or more (83 public courses, 34 private clubs) that offer nighttime play for willing golfers, with tee times as late as 8 p.m. Seo said there are countless other 9-hole courses that also feature floodlights and do not close until midnight or later.

Many people from Seoul, for instance, make the trek to Sky 72 Golf & Resort in Incheon, close to the area’s main international airport, where 2,700 lights have been installed to illuminate 36 of the facility’s 72 holes.

A similar scene plays out nightly at TGV Country Club, located an hour and a half outside Seoul, which offers after-dark play for its own 36 holes — most of which have double side-by-side greens to help offset the wear from heavy use.

The concept of golfing under lights exists outside South Korea, of course.

A writer for the website GolfPass last year counted 65 courses in the United States that featured at least some amount of nighttime lighting — though all but one of them were short courses. And courses in the States that offer late tee times still close far earlier than those in South Korea, which often remain open as late as 1 a.m.

Golfing under the moonlight can have other practical purposes. At Emirates Golf Club in Dubai, for example, late-night tee times offer golfers respite from the region’s punishing summer sun.

But no other country has embraced the practice with quite the same gusto as South Korea, where playing at night offers its own quirks and charms.

Floodlights can imbue even ordinary play with a cinematic quality.

The sun may be long out of sight, but visors still rest atop many golfers’ heads. (A recent study found South Koreans spend more per capita on golf apparel and equipment than residents of any other country.)

And for all of the minor hassles, there is one considerable upside of being a night owl: Golf tans, at least, are out of the question.

A Double Amputee’s Hopes for the Olympics Are in Jeopardy