EUGENE, Ore. — As the top 500 American track and field athletes gather this weekend for the Olympic trials, a question that has consumed videoconferencing calls and text chains throughout the sport over the past year will finally be discussed in person.

How is Nike rethinking its financial support of track and field in the United States, a sport that has been sustained by its largess for decades?

Nike is notoriously secretive, and as a result a mystery leading into the Tokyo Olympics has blossomed from the company’s smaller maneuvers: canceled or reduced sponsorship agreements, executive shuffling and its internal responses to scandals in the sport.

The company won’t say whether its moves are connected with a broader strategy. A spokeswoman declined to make any executives available for interviews and said in a statement that Nike had been “a long standing supporter of the sport and remain extremely proud of our commitment.” The statement added that “like many brands, we continue to deal with new dynamics around our business, but Nike remains passionate about and committed to Track and Field.”

Still, a dozen people — including current and former employees of Nike and other apparel companies, agents, athletes and executives involved in the sport — interviewed for this article, many on condition of anonymity because they feared retribution from the sport’s biggest sponsor, see unmistakable signs that Nike’s enthusiasm for track and field is lessening, although they occasionally disagreed with one another about how much.

The company has declined to renew its sponsorship agreements with at least a dozen athletes who have shots at competing in Tokyo. Top Nike executives who long steered funding toward track and field have left the company, and a company reorganization has de-emphasized individual sports at the expense of the broader categories of men’s, women’s and children’s apparel.

“The thing people started talking about when they heard about cuts is, ‘Oh no, track and field, what will happen,’” said Jesse Williams, the owner of the running events company Sound Running and a former longtime employee of the shoemaker Brooks. “I truly believe that other brands have almost been scared away over the years. I do think if Nike was to pull back a little and there was an opening there, the void would be filled.” 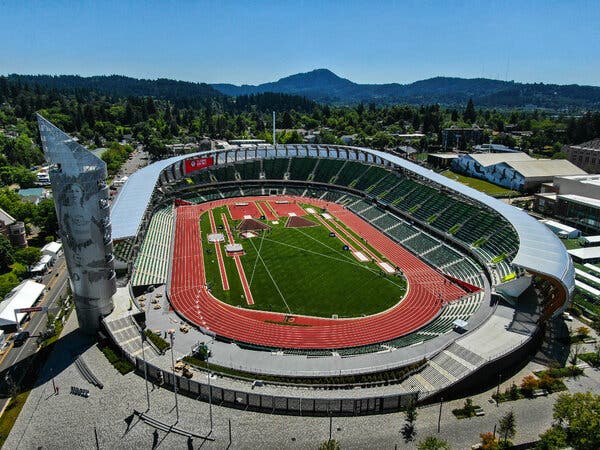 Hayward Field, where U.S.A. Track & Field is hosting the trials, is a fitting place to discuss Nike’s maneuvering while also determining who will represent the United States in Tokyo. The track at the University of Oregon is the spiritual home of Nike, the place where its two founders — Bill Bowerman, who coached the Oregon track and field team, and Phil Knight, one of his runners — met and eventually developed their famous waffle-soled shoes, which they parlayed into a company worth $200 billion.

As Nike has grown, it has dominated track and field with the fervor of a team trying to run up the score: Don’t just win, crush the competition to send the message that elite athletes who win do so while wearing Nike.

Several visible changes have prompted athletes to question whether that is changing.

Nike has long tried to gobble any track and field athlete who had even an outside shot at competing on the world stage. While other running brands, for example, sponsor a handful of distance runners or perhaps a group of them, Nike sponsors dozens of runners who run middle and long distances in three groups, as well as sprinters, field athletes and distance runners who are not part of one of the groups.

“Nike’s heritage is in track and field, and I think that was always a deep-down desire, they had to win, whether with U.S.A.T.F., the Pre Classic or Team USA,” said Michael Bergmann, a longtime Nike executive who now runs the Portland Track club.

Going into 2021, however, some competitive runners have been unusually critical of the company after their contracts were allowed to expire.

Tianna Bartoletta, who has won three Olympic gold medals in the long jump and sprint relays, is one of them. As she worked to regain fitness in 2020 after surgery on a benign tumor on her uterus, she had little contact with Nike, and one of her quarterly payments even failed to appear in her bank account.

“During that time I got a new manager and he called Nike, and Nike said, ‘Oh, it is because she did not compete at the Olympic Games in 2020,’” Bartoletta recalled. “At that point I let out the most maniacal laugh, the laugh was like a delirious laugh.”

Tianna Bartoletta competing at the 2016 Olympics in Rio de Janeiro, where she won gold medals in the long jump and a sprint relay.Credit…Doug Mills/The New York Times

Yes, competing at the Games in 2020 was a stipulation in her contract. But that became impossible when the Olympics were delayed to this summer because of the coronavirus pandemic.

Eventually, Nike fully paid her $75,000 contract for the year. But it did not extend it — even with the Tokyo Games on the horizon, the biggest marketing payoff for any sponsor connected with a potential competitor. Bartoletta, 35, trained for what will almost certainly be her final Olympics without a shoe sponsor for the first time in 15 years.

Colleen Quigley, who finished eighth in the steeplechase at the Rio de Janeiro Olympics in 2016 and is one of the most popular runners on social media, said on a podcast in April that she left Nike for Lululemon Athletica because she felt Nike was lowballing her.

“Nike was trying to offer me less than what they offered me when I came out of college,” Quigley said. “To me, it was just a slap in the face.”

The executives with the biggest say in Nike’s track and field marketing have changed tremendously since the beginning of 2020.

Mark Parker, the company’s longtime chief executive who began his four decades of Nike employment designing running shoes in the 1970s, retired last year, and was replaced by John Donahoe, a former eBay chief executive with no known passion for running. John Capriotti, who headed up Nike’s track and field marketing division for almost three decades, also retired, under cloudy circumstances. Capriotti had been widely considered the executive who controlled the purse strings for the entire sport.

Capriotti’s resignation, though he remains a Nike adviser, as well as the strange departures of two of his top lieutenants, Craig Masback and Tim Phelan, have prompted significant questions while offering few answers. Last year Nike confirmed to The Oregonian, a Portland newspaper, that Masback, who used to be the president of USA Track and Field, had left the company. But a month later he was responding to emails from his Nike email address and was in charge of track and field marketing, similar to Capriotti’s old job, say people who have dealt with him recently.

Capriotti and Phelan did not respond to messages seeking comment. Nike declined to make Masback available for comment.

Craig Masback, then the vice president of Nike global sports marketing, spoke during a ceremony last year to celebrate its sponsorship of the Chinese Athletics Association.Credit…Wang Lili/Xinhua, via Getty

Two former high-level Nike executives, who spoke on condition of anonymity either because of separation agreements they have with the company or because they feared it could hurt their job prospects, said Donahoe and Nike’s top executives were changing strategies amid scandals for Nike in the track and field world over the last few years.

Female runners have detailed how Nike reduced their contracts after they became pregnant. The coach of Nike’s high-profile distance running group was barred from the sport for doping offenses and has been accused of bullying and belittling women. That coach, Alberto Salazar, is appealing his suspension to the Court of Arbitration for Sport, and the court is expected to rule soon. There is still a building named after him on Nike’s Beaverton, Ore., campus, which employees have protested.

The running world is waiting on Nike — and maybe unknowingly, on its founder.

Because Nike has numerous long-term contracts with athletes, federations and meets, it could take years for any pullback to be felt fully by the sport. And while some athletes certainly worry about the implications of a less free-spending Nike, even some die-hards think the sport would be better off with more room for other brands to compete.

“Diversity in brands and products is really good for the sport, versus it all has to be one. This is coming from a guy that has a three-digit employee number,” said Bergmann, referring to how early a Nike employee he was. “I love the brand, I grew up with it, but I also see if you are too dominant then it is really not good,” he added.

With new, and different, money in the sport, some hope athletes who would have been afterthoughts at Nike, one among hundreds of sponsored athletes, can be more effectively promoted to the general public. “The sport lacks heroes,” said Martyn Brewer, a former marketing executive at both Nike and Adidas. “There was one superstar in the sport for the last decade, Usain Bolt.” (Bolt is sponsored by Puma.)

Others hope Nike’s changes will lead to new and perhaps more radical ideas about how to reimagine the sport from the ground up.

“The reason I say change is good is that we are broken now,” said Williams, the running events company owner. “Even people that love track and field complain all the time about how it is set up, packaged, shown, and the way it works at almost every level. How can we blow that up and kind of start over?”

Ultimately, however, it may be a different form of Nike money that attempts to prop up and modernize track and field.

Knight, the Nike co-founder who stepped down as its chief executive in 2004 and as the chairman of the board in 2016, has gathered a group of people to study how he can best use some of his billions to help the sport he loves so dearly, according to three people familiar with his plans.

One former Nike employee, who confirmed that he was involved with Knight’s project but declined to describe it in detail, said the group was still in its exploratory phase. A different former Nike employee recalled, while still working at Nike, being interviewed by a consultant of Knight’s in 2018.

Both former Nike employees said Knight was exploring what he could do with his own money — independently of Nike.

“He has a group of people that are looking at different things to generate interest in the sport, and they are former Nike folks that are really smart,” said Bergmann, the Portland Track official. “I don’t know exactly what he has tasked them to do, but I do know that they call me a lot and they like what we are doing. Whatever we are doing, they are reporting back to him.”