Erika Carter breathed a small sigh of relief when she learned that Mike Polisky had resigned as the Northwestern University athletic director after about 10 days in the role.

But it was just a small sigh.

Polisky had stepped aside on Wednesday amid escalating questions over his and the university’s handling of accusations of sexual harassment and racism within its cheerleading program. Carter, who graduated from Northwestern in 2018, was one of several cheerleaders to raise allegations that she said were largely ignored when Polisky was the university’s deputy athletic director. To Carter, Polisky’s brief appointment had signaled to her and several female faculty members that the department still was not listening.

Polisky, who had held the deputy role at Northwestern for more than a decade, said in a statement announcing his resignation that “current challenges will not allow me to effectively lead our department, especially during these unsettling times in college athletics.”

Mike Polisky had been the deputy athletic director at Northwestern for more than a decade.Credit…ABC Chicago

Carter thought his use of the word “challenges” was too euphemistic. “No: There’s racism, there’s sexism, there are sexual harassment complaints, there’s leadership failure,” she said in a phone interview Wednesday. “And that’s why you can’t do your job effectively.”

Current and several other former cheerleaders have said complaints about inappropriate touching by fans and alumni at events held to garner donations and discriminatory policies — including a rule banning hair braids — enforced by the program’s former coach were dismissed by other members of the university’s athletic department, including Polisky.

Carter, 23, said that while she was a member of the team from 2016 to 2018, the coach, Pam Bonnevier, threatened to cut Black cheerleaders from the team if they wore their hair naturally, prevented them from attending alumni events as often as their white teammates, and even controlled how cheerleaders walked out onto the field, reordering them by race. 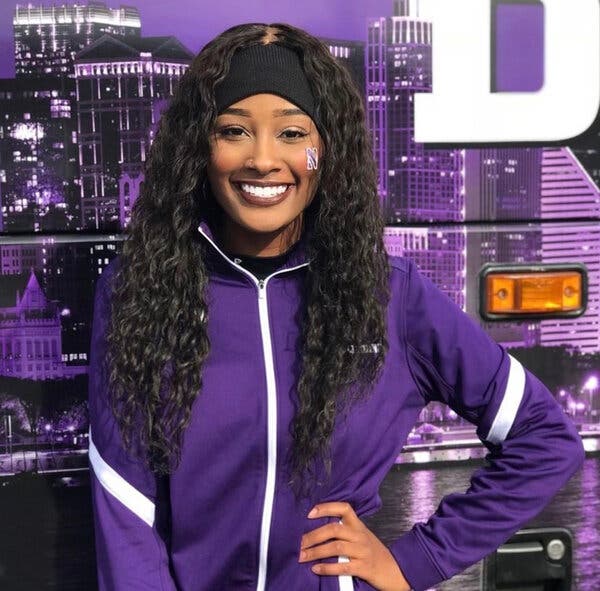 Erika Carter, who was a member of Northwestern’s cheerleading team from 2016 to 2018, said the university mishandled complaints of racism and sexual harassment.

Hayden Richardson, a member of the team from 2018 to 2020, filed a lawsuit in January 2021 against the university, its deputy Title IX coordinator, its associate athletic director for marketing, Polisky and Bonnevier, claiming that she had been groped, harassed and lifted without her permission by intoxicated fans and alumni during university-sponsored events and tailgating parties. She said in the lawsuit that she had been encouraged to continue taking photographs and mingling with potential donors to elicit funds for the university even though she raised concerns about those actions to Bonnevier and Polisky.

The lawsuit, filed in a U.S. District Court in the school’s state of Illinois, also contends that the Title IX office violated federal policy by delaying a formal investigation into these actions over a year after Richardson reported them.

In her university thesis, which details the experiences of her and other cheerleaders, Richardson wrote that in January 2019 members of her team met with Polisky to voice their concerns around tailgating. He responded, “What did you expect as cheerleaders?” She added that Polisky had accused two teammates of fabricating evidence when they sent 16 anonymously written accounts of harassment to him and Heather Obering, the associate athletic director for marketing, at the same meeting.

Polisky denied these allegations in an email through his attorneys to The New York Times on Friday, as did a representative for Obering. Both have moved to dismiss the case, along with the university. An attorney for Bonnevier did not respond to requests for comment.

Polisky and Obering forwarded complaints from the January 2019 meeting to the university’s Office of Equity, which investigated. Later in 2019, policies restricting hairstyles were removed and cheerleaders were no longer required to participate in tailgates, a spokeswoman for the university, Jeri B. Ward, wrote in an email to The Times on Thursday. Bonnevier’s contract was not renewed in 2020 after she was found to have violated the university’s discrimination and harassment policy, Ward said.

“This is ultimately a question of whether Me Too and Black Lives Matter will have meaning on college campuses, and also how much sway big donors will have over student safety,” Caitlin Fitz, a history professor who worked on letters and protests over Polisky’s hiring, said in a phone interview on Wednesday.

Among the complaints in the lawsuit is that the white cheerleaders were elevated above the black cheerleaders to be the face of the cheerleading program.Credit…Nuccio DiNuzzo/Getty Images

Morton Schapiro, the university president, defended Polisky’s promotion on May 6 in a public letter, writing that an independent investigator hired by Northwestern found Polisky had not violated school policies in preliminary findings from an inquiry into the complaints raised by cheerleaders. Regarding Polisky, he wrote, “I would not have hired him if he did not meet the highest standard of conduct and character.”

Schapiro continued in the May 6 letter that the university had sought to dismiss Richardson’s lawsuit. “Having reviewed the complaint, Northwestern denies that it or any of its current employees violated any laws, including Title IX,” he wrote.

Ward said on Thursday that the independent investigation would not change because of Polisky’s resignation.

Karen J. Alter, a professor of law and political science who is one of the leaders of Northwestern’s Organization of Women Faculty, said in a phone interview on Thursday that Polisky’s hiring echoed broader issues. In a 2018 study by a committee for female faculty, female staff members said their complaints about harassment and discrimination at the university often went ignored.

A statement by the faculty organization released on Thursday said that “such disregard has a spillover effect that makes women feel disrespected and even unsafe.” The organization added that hiring Polisky amid a lawsuit and ongoing investigation was “unacceptable.”

Polisky briefly replaced Jim Phillips, who is now the commissioner of the Atlantic Coast Conference. Schapiro said that Robert Gundlach, a professor of linguistics who had stepped in as an interim athletic director in 2008, would lead the department as the university searches for a replacement.

Hours before Polisky announced his resignation, more than 100 alumni, donors, executives and a handful of student-athletes sent a letter to the Board of Trustees in support of his hiring, writing that they were confident the legal process would “completely vindicate” Polisky.

After the lawsuit was filed in January and a former member of the team, Alyssa Johnson, wrote about the problems with the cheerleading team for the student newspaper in February, about 80 female professors signed an open letter to university leaders denouncing its handling of the accusations of racism and sexism.

“It’s the violence against the young women — the attempts to dismiss them and to cover it up and to get away with it — and to even sort of use them in sexualized ways to get more donors to give more money,” Elizabeth Shakman Hurd, a politics professor who helped write the letter, said in a phone interview on Wednesday.

After Polisky was announced as athletic director, six female faculty members, including Fitz and Hurd, sent a second letter calling for an external review and transparency in the decision-making process, and organized a march to Schapiro’s home with almost 400 people to protest the hiring.

Carter, who is now a law student at Columbia University, spoke at the march and started a petition to have Polisky removed. She said she hoped that the university would take a harder look at policies across its athletic department.

“I’m pretty sure there are bigger issues than just on the cheer team, people just haven’t probably complained,” she said. “Transparency into the process of selecting a new A.D., that’s really what I would like to see. And hopefully a Black woman in that position eventually.”

Expert Picks: Who Will Win the Belmont Stakes?