While the Kentucky Derby-winning horse Medina Spirit spent most of Monday in a van headed to Baltimore, his defiant Hall of Fame trainer Bob Baffert blitzed the airwaves to deny that he was a cheater and warn that he was willing to go to court if his horse was barred from running in the Preakness Stakes this weekend.

The white-haired Baffert, the face of American horse racing, usually makes the national media rounds after signature victories, like his record-breaking seven Derbys. For nearly 25 years, his California cool and quick-with-a-quip personality have charmed morning show hosts and the public alike.

On Monday, however, Baffert was sober and defiant about his colt’s positive drug test for betamethasone, a corticosteroid injected into joints to reduce pain and swelling.

“We did not cheat to win the Kentucky Derby,” said Baffert in an interview on “Fox & Friends.”

Baffert said neither he nor anyone else on his team had administered the drug to Medina Spirit. He insisted the colt had never been treated with it and, in a series of network and radio interviews, floated scenarios ranging from contamination to vague conspiracies to “cancel culture” to explain the controversy.

If a second sample, collected at the same time as the first, confirms the result in a test expected in the coming weeks, Medina Spirit would be disqualified and the Derby’s runner-up, Mandaloun, would be declared the winner, said officials at Churchill Downs, the racetrack in Louisville, Ky. They also barred Baffert from entering horses to run at Churchill Downs. 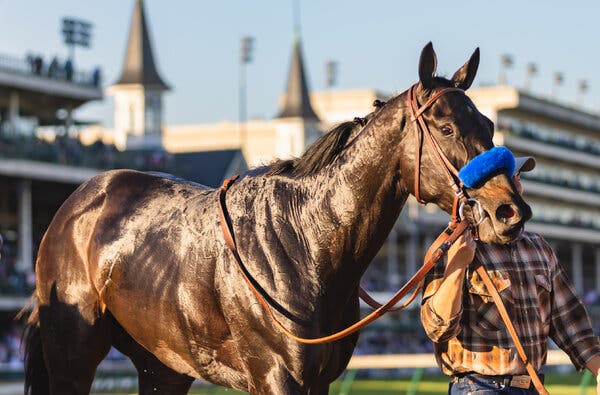 “Churchill came out with a really harsh statement. I think it was a knee-jerk cancel culture kind of reaction. They violated my due process,” Baffert said on Dan Patrick’s radio show. “Now I have to fight this in public.”

Maryland horse racing regulators and The Stronach Group, which owns Pimlico Race Course and hosts the Preakness Stakes, the second leg of the sport’s Triple Crown, were discussing whether to follow Churchill Downs and bar Baffert from entering horses in the Preakness or any of its other races. Baffert, who planned to enter Medina Spirit and Concert Tour in the Preakness, acknowledged that his legal team was talking to Maryland officials as well as considering a court fight if he was barred.

“We are going to be aggressive,” he told Patrick.

Baffert also said he did not want to be a “distraction” and would not travel to Baltimore, instead letting his longtime assistant Jimmy Barnes saddle his two colts.

Entries for the Preakness were supposed to be drawn on Monday, but the draw was pushed back until Tuesday at 4 p.m. “We are consulting with the Maryland Racing Commission and any decision regarding the entry of Medina Spirit in the 146th Preakness Stakes will be made after review of the facts,” The Stronach Group said in a statement.

Baffert’s horses have failed 30 drug tests — five in the last year or so — spurring chatter from rivals who believe he has cheated and gotten away with it in some of the sport’s biggest races. Horse racing’s longstanding doping problem, lax regulation and byzantine justice system allowed those suspicions to fester. Baffert’s cases took months, if not years, to adjudicate and were met mostly with modest fines or brief suspensions as he asserted he did nothing wrong and blamed environmental contamination or human error for the results.

Baffert told Patrick that one of his horses, Merneith, was found to have excessive amounts of the cough suppressant Dextrorphan in her blood or urine after a race last year because the groom who took care of the horse urinated in its stall. He said the groom was sick with Covid-19, the disease caused by the coronavirus, and was taking cough syrup that contained Dextrorphan.

Baffert said that he supported the Horseracing Integrity and Safety Act, which was passed last year in Congress and will take effect July 1, 2022. It calls for a board overseen by the Federal Trade Commission to write rules, with penalties to be enforced by the United States Anti-Doping Agency.

“I’d welcome Travis Tygart,” Baffert said, referring to the head of the agency, which regulates Olympic and other elite athletes in the United States. The agency exposed the cyclist Lance Armstrong’s cheating and issued him a lifetime suspension in 2012.

With Medina Spirit’s Derby victory, a $1.8 million first-place check for its owner Amr Zedan, and his reputation hanging in the balance, Baffert offered various theories about how the colt tested positive.

Medina Spirit winning the Kentucky Derby on May 1.Credit…Christian Hansen for The New York Times

“I am hoping it’s a mistake,” he told Patrick. “Maybe it was the wrong horse.”

Baffert was asked if he was sabotaged.

“I don’t know if I was sabotaged indirectly. I think it could have been somebody handled this horse or touched it,” Baffert said.

Of his critics within the sport, Baffert said they were merely envious.

But he acknowledged that his reputation has taken a hit among casual horse racing fans, those who tune in perhaps once a year on Derby Day.

“I would never risk my reputation,” he said. “I train great horses, and I train for great clients. This just doesn’t make sense.”

Coach K’s Retirement and the End of the College ‘Supercoach’