Here is what the Yankees’ Gerrit Cole should have said last week when asked if he had ever used Spider Tack while pitching: “I follow all the rules that baseball is willing to enforce.”

That would have put the emphasis where it belongs.

On Tuesday, Major League Baseball formally announced “enhanced enforcement” of its longstanding rules prohibiting the application of foreign substances to baseballs. This continues the sport’s tradition of winking at scofflaws until the situation gets out of control.

Do we really think that the 1919 Chicago White Sox were the first group of players to take money for fixing games? Was Jackie Robinson the very first Black man qualified to play in the majors? Did nobody ever take steroids before Ken Caminiti admitted it? Did the 2017 Houston Astros invent the art of illegal sign stealing?

Of course not. And just like in those shameful episodes, M.L.B. knew what was happening long before making a fuss about it.

Starting on Monday, umpires will check the gloves, hats, and fingertips of every pitcher who appears in a game. If those fidgety pitchers look suspicious as they tug their sleeves or hike their belt or scratch their head, they can expect an additional umpire visit. Anyone found with a foreign substance will get a 10-game suspension, and their team will not be allowed to replace the player on its active roster.

If baseball follows through with its planned enforcement, expect a major shift in the culture of the game. In the century since the league banned the spitball, generations of pitchers have used gripping agents on the mound, mostly with impunity. Some have been caught and punished, but typically only when flouting the rules in an obvious manner — think Michael Pineda with pine tar smeared on his neck — that they basically goaded the other team into asking an umpire to intervene.

The problem now is that pitchers have advanced from pine tar to products like Spider Tack, a sticky paste meant to help competitive strongmen haul stones that weigh hundreds of pounds. It would have made sense to approve something besides the rosin bag to give pitchers a consistent feel and grip; say, a sunscreen-and-rosin mix. When a baseball feels slick — as it often can on cold nights, in particular — it’s a danger to hitters and pitchers alike. 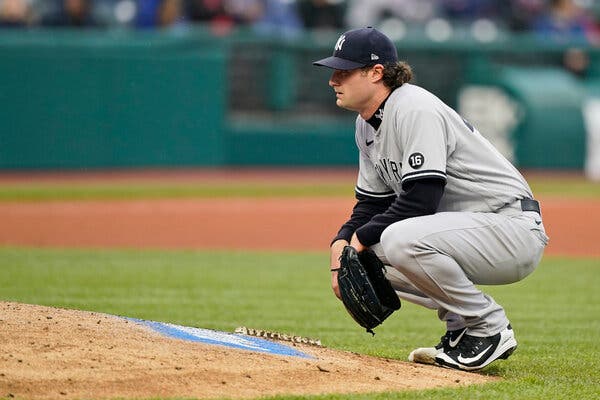 Gerrit Cole of the Yankees talked around whether he had ever used Spider Tack to improve his grip on baseballs. Regardless, the prohibited substance has become incredibly common.Credit…Tony Dejak/Associated Press

But the use of sticky substances to gain an unfair edge is hardly new.

Four years ago, the longtime slugger Jason Giambi spoke with me at length about the evolution of various pitches. It stood to reason, Giambi said, that modern technology would deter pitchers from doctoring baseballs.

“Not only do you have players watching it, you’ve got the video guy down in the tunnel, and then your other video guys running the whole room upstairs,” he said. “So you have so many sets of eyes on these guys, and especially if they see a pitch that looks really abnormal, the guy rewinds it 5,000 times: ‘OK, what did he do different? Oh, he went to the side of his pants, he went to his belt, he went to the top of his hat.’

“Then they start to put together the timeline of every time he’s pitched, does that ball do the same thing? What about his last start, his start before that? And before you know it, they’ve got it down — all right, go tell the umpire to check his hat, or check the side of his pants, or check inside his glove. You can’t hide anymore.”

Giambi was right: Video and data could, indeed, detect who was doing what and when. But teams did not use it to stamp out the practice, deciding instead to cultivate their own spinmeisters in organizational pitching labs that offer instant feedback via high-speed cameras. (The Yankees’ facility in Tampa, Fla., is known as “the gas station.”)

A higher spin rate allows a pitch to hold its plane longer, creating the illusion of rise and making it harder to hit. By knowing their precise spin rates, pitchers have a better idea of what to use to exploit hitters’ weaknesses. The impact has been staggering.

In the 2016 season, there were 3,294 more hits than strikeouts in the majors. By 2018, strikeouts had narrowly overtaken hits. And if the 2021 numbers continue at the current rates, there will be about 5,200 more strikeouts than hits this season.

Baseball has stood by and let this happen, sometimes to a comical degree. In April 2017, Yadier Molina of the St. Louis Cardinals blocked a pitch in the dirt and searched frantically for it, only to see that it was stuck like velcro to his chest protector. M.L.B. determined there was no rules violation, and everybody had a good laugh.

In 2017, Yadier Molina of the St. Louis Cardinals was unable to locate a ball because it had gotten stuck to his chest protector. M.L.B. determined no rules had been violated in terms of foreign substances on the ball.Credit…Jeff Curry/Getty Images

Trevor Bauer, now with the Los Angeles Dodgers, saw what was happening. He even showed it in the first inning of a start in April 2018, with Cleveland, when he raised his spin rate by about 300 revolutions per minute. Bauer had cited that figure as the increase a pitcher could get by using a gripping agent on the ball.

“There is a problem in baseball right now that has to do with sticky substances and spin rates,” Bauer told reporters then. “We might not have had the technology before to measure how sticky stuff affects the ball, how it spins, how it moves. But all that research is clear now.”

Bauer added: “It is the same argument that was used when steroids were going on in the game. If you just look the other way and you let some people do it, the people who chose not to do it are at a competitive disadvantage. And that’s what’s going on right now.”

As it was in the steroid era, baseball was more concerned with appearances than competitive disadvantages. When home run records started falling — and Congress started calling — M.L.B. and the players’ union were finally motivated to institute drug testing with meaningful penalties.

Now, it seems, baseball is terrified by the product it has become. While it’s hard to share Mets first baseman Pete Alonso’s belief that M.L.B. routinely changes the baseball based on the next free agent class, the home run rate did spike significantly in 2015, just after it fell to a 22-year low. When home runs rise, strikeouts typically follow — but now there are too many strikeouts.

The result is a style of play that many longtime observers, inside and outside the sport, barely recognize. It is a style the league promoted by reacting too late to a trend that was clear all along.

Will College Athletes Make Money? Here’s Where the Debate Stands.