In his first N.B.A. game, in October 1960, Oscar Robertson registered 21 points, 12 rebounds and 10 assists for the Cincinnati Royals against the Los Angeles Lakers. In his second N.B.A. season, Robertson averaged 30.8 points, 12.5 rebounds and 11.4 assists per game for Cincinnati.

Such numerical assemblages — reaching double figures in those three categories — are known in basketball parlance as triple-doubles. Yet Robinson established a league record, with his 181 triple-doubles across 14 seasons, without any fanfare. The term was not coined until the early 1980s, when the Lakers’ Magic Johnson began routinely posting Oscar-esque lines in box scores.

“Honestly, I was totally unaware of it,” Robertson said this week.

Nearly 50 years removed from Robertson’s final season with the Milwaukee Bucks in 1973-74, there is a hyperawareness of triple-doubles, thanks largely to Russell Westbrook of the Washington Wizards. In 2016-17 with the Oklahoma City Thunder, Westbrook became the first player since Robertson to average a triple-double for a full season, prompting Robertson to travel to Oklahoma to personally congratulate Westbrook. 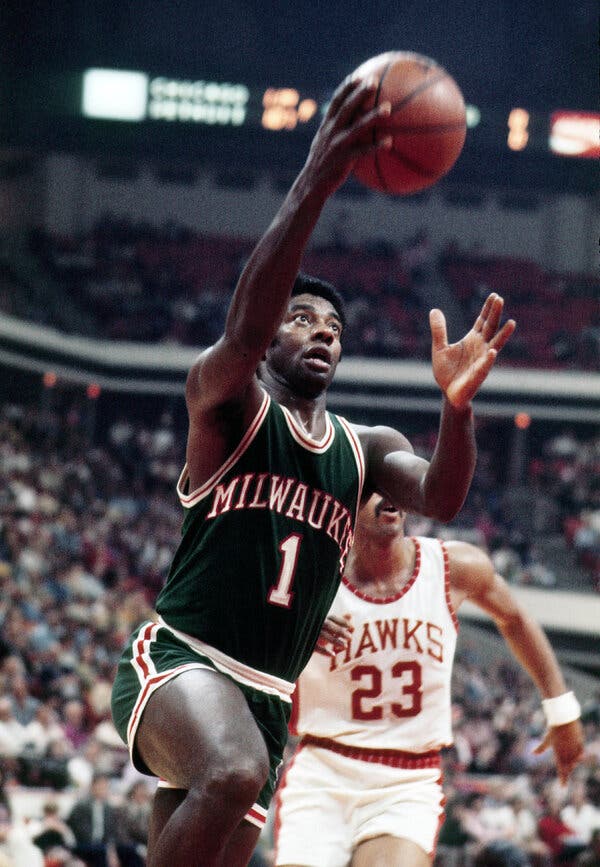 Robertson was traded to Milwaukee from Cincinnati in 1970, and won a championship with the Bucks the next season.Credit…Manny Rubio-USA TODAY Sports

Westbrook has amassed 178 triple-doubles in his career and, with seven games left on Washington’s schedule entering Wednesday’s play, has a chance to surpass Robertson this season. In a phone interview with The New York Times, Robertson, 82, said he was rooting for Westbrook to do so and discussed the criticism that he, like Westbrook, faced in his Royals days until he teamed up with Kareem Abdul-Jabbar in Milwaukee to lead the Bucks to their only championship, in 1971.

This interview has been condensed and lightly edited for clarity.

So if they didn’t call them triple-doubles, what did people say about your big statistical performances?

Not very much. In those days, they focused on scoring and the blocking of shots. There wasn’t much publicity associated with it. It wasn’t thought of until they went back into the archives and saw what I had done. I was even surprised myself.

Over the first five seasons of your N.B.A. career, you averaged a triple-double (30.3 points, 10.4 rebounds, 10.6 assists). Did you personally look at those numbers with any added reverence?

What was the secret to being a good rebounder at 6-foot-5?

In high school, I played inside and outside. So when I got into the college ranks, I went to the forward position. I just had the fundamentals to be able to play in or out. I always thank my coaches from high school for helping me build those attributes. I just knew how to box out. For me, it was just playing basketball.

Cincinnati’s Robertson juggling for possession of the ball against Detroit’s Gene Shue and Chuck Noble in 1961. Credit…Bettmann/Getty Images

Westbrook gets a lot of criticism because he hasn’t been part of a championship team in the N.B.A., and I imagine you faced something similar during your time in Cincinnati. What do you remember about the years before you won a championship with Milwaukee?

I think this happens with great basketball players, like Westbrook and myself. I was with Cincinnati for many years, but we never made any notable trades to get better players. If you look back through the history of basketball — and I always tell people this — every team that’s won a championship has made key trades. Boston got Bill Russell. Red Auerbach was very astute at getting older starters from other teams to play off the bench for him. A lot of the teams I played for, they didn’t want to do that.

When you look back, how jarring was it to be traded from Cincinnati to Milwaukee in 1970?

It was fine. I just resented the fact that the Cincinnati basketball family felt that I hadn’t done anything in 10 years, and all I had done was make All-Pro 10 straight years. But they wanted to trade Oscar Robertson. I just did not want them to try to destroy my credibility and what I had done for the city of Cincinnati. When I went to Milwaukee, I assessed my situation, and I’ll never forget, I told my wife, “I’m not going to be the scorer I was in Cincinnati.” And she said, “Why?” I told her I have to get these other players involved in the game. For us to win, we’ve got to get the other players to make a contribution offensively.

Is it accurate to classify you as a Russell Westbrook fan?

I totally enjoy the way Westbrook plays. He’s a dynamic individual. They’ve moved him around to different teams and I don’t know why, because I think he’s one of the star guards in basketball. I guess they thought that when he went to Washington that he would not be that effective, but, man, he’s done a tremendous job.

“I think he’s one of the star guards in basketball,” Robertson said of Westbrook.Credit…Layne Murdoch/NBAE via Getty Images

And you’re rooting for him to break your record for career triple-doubles?

There’s no doubt about it. I hope he gets it. I think he’s one of the elite guards in basketball, and I think it’s ridiculous that some sportswriters criticize him because he has not won a championship. Players don’t win championships by themselves. You’ve got to have good management. You need to get with the right group of players.

Look at Brooklyn: Who could have done this years ago? How things have changed. It seems now that what’s happening in basketball, and I haven’t seen it happen in football yet, is players will get together and say, “Let’s go and play for this team so we can win.” Years ago, you wouldn’t have thought of doing that.

Who else do you enjoy watching in today’s N.B.A.?

I like to watch a lot of players, really. LeBron [James], of course. [Stephen] Curry. I like [James] Harden. There are so many great basketball players — including the kid out of Portland: [Damian] Lillard. Curry is probably one of the finest shooters ever, but so is Lillard. He can really shoot the basketball from far out. It’s almost effortless.

Long-distance shooting has taken over the modern game. You’re OK with that?

It’s a different type of basketball. It’s a players’ game. And it’s a fans’ game — they love this. I’ve always said this: 3-point shots are like 7-footers used to be — they can get a coach fired. If you have 3-point shooters and they don’t make those shots, “That’s it, Coach.” The name of the game is to outscore your opponents. That’s what it’s about. If you can shoot 3-point shots and you can win the basketball game, it’s great. If you start missing those shots and you don’t make the adjustment and start doing some other things, you’re going to be in trouble.

A Barcelona Star on Style, Substance and Another Champions League Final