The Rangers entered Wednesday’s game against the Washington Capitals on a three-game losing streak and 10 points behind the fourth-place Islanders in the East Division. They were officially eliminated from playoff contention on Monday, when they lost, 6-3, to the Capitals.

Gorton, 52, became the general manager when Glen Sather stepped aside in July 2015 after 15 years in the job. Sather remained as the team’s president until 2019, when Davidson was hired. Gorton and Davidson were overseeing a rebuild that began in earnest with a letter sent to the fan base in February 2018.

The Rangers have not made the traditional playoffs since the 2016-17 season, though they participated in last year’s postseason format, which was expanded because the coronavirus pandemic had interrupted the season.

“We want to thank JD and Jeff for their contributions to the organization,” the team owner, James L. Dolan, said in a statement. “They are both great hockey professionals who worked hard for the Rangers, however, in order for the team to succeed in the manner our fans deserve, there needs to be a change in leadership.”

The stunning moves came a day after the Rangers chastised the N.H.L. player safety chief, George Parros, for not suspending Capitals winger Tom Wilson for punching Rangers forwards Artemi Panarin and Pavel Buchnevich during a scrum in Monday’s game at Madison Square Garden. The league on Tuesday fined Wilson $5,000, the maximum allowable amount, and the Rangers later released a scathing statement criticizing the league for not issuing harsher discipline. It was unclear whether the team’s statement, which called Parros “unfit for duty,” had factored into the firings.

Chris Drury, 44, the associate general manager, will become the team’s new president and general manager. Drury, the 1999 rookie of the year, spent the last four years of his playing career with the Rangers and joined the team’s front office in 2015. Sather, who has been a senior adviser with the team since 2019, will work with Drury during the transition period.

“Chris is a very sought-after executive and a strong leader, who has proven himself to be one of the top young minds in hockey,” Dolan said. “We are confident he will effectively guide the team to ensure the long-term success we promised Rangers fans.” 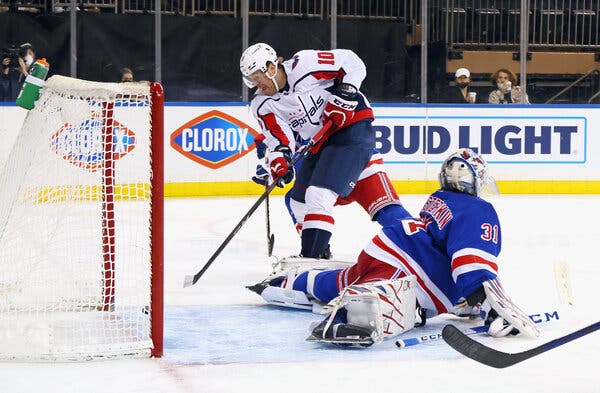 Washington’s Daniel Sprong scoring during the Capitals’ win on Monday. The Rangers are 5-5 in their last 10 games, including a three-game losing streak, and will miss the postseason.Credit…Bruce Bennett/Getty Images

Davidson, 68, said at his introductory news conference two years ago that he was eager to work with Gorton and Coach David Quinn to develop a culture of accountability with the Rangers. Quinn, the former men’s hockey coach at Boston University, is finishing his third season behind the Rangers’ bench.

Since the 2018 letter, the Rangers have made six first-round draft picks, including the heralded forwards Kaapo Kakko at No. 2 in 2019 and Alexis Lafreniere at No. 1 in 2020.

“There are no quick fixes,’’ Davidson said when he was hired. “It’s hard work, it’s patience and it’s having the proper resolve.”

Davidson left his mark on the Rangers before his tenure as president. He played 222 games in goal for the team and led the Rangers to the Stanley Cup finals in 1979. He became a broadcaster with MSG in 1983 and left in 2006 to become president of the St. Louis Blues for six years before assuming the same role with Columbus, where he was until 2019.

Another former Rangers stalwart, Mark Messier, stumped for himself during a radio appearance Wednesday afternoon.

“I’ve made it very clear that I’ve been standing by ready to help out in any way for many years,’’ Messier, who led the team to a Stanley Cup title in 1994, said on “The Michael Kay Show.” “I don’t really know what else to say.”