New York City basketball fans were out in full force this past weekend, as the Knicks began a first-round playoff series against the Atlanta Hawks, and the Nets opened their postseason against the Boston Celtics.

Much to the chagrin of Knicks fans — known for their patient, understanding nature — their team lost to the Hawks in Game 1 of their series on Sunday, 107-105, thanks to a last-second floater from the villainous Trae Young.

Across the East River the day before, the Nets — currently the Knicks’ adorable, more talented younger brother — easily dispatched Boston, 104-93.

Yes, the Nets are the team more likely to win a championship this season. With the addition of James Harden to the tandem of Kyrie Irving and Kevin Durant, they might have one of the most talented rosters in N.B.A. history. Yet, if this weekend was any indication, if the Nets indeed win the title, New York City may react with a collective shrug.

Meanwhile, as the Knicks tipped off against the Hawks, the fans in Manhattan reacted as if Elvis had risen from the dead. 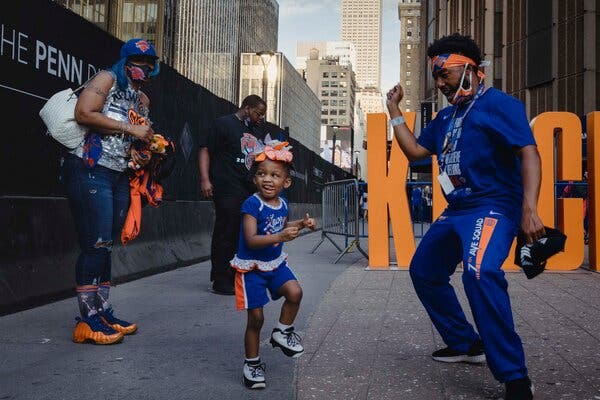 OK, we’re being kind of unfair to the Nets. They’ve built an enduring fan base of their own. So they say. But attendees yelling “Brooooklyn!” repeatedly doesn’t have the same ring as Knicks fans yelling, uh, nevermind. We can’t type that here.

“The crowd kind of threw me off a bit,” Harden said. “It was pretty loud in there, and the vibe was what we’ve been missing.”

Derrick Rose, the Knicks guard, said the crowd was “everything that we expected and probably a little bit more.”

Basketball has a long history in New York City, even if N.B.A. championships do not. This is a city of basketball aficionados, and seeing both the Knicks and the Nets make legitimate playoff runs at the same time is a cultural event.

Who knows when we’ll get to see this again?