Kendrick Carmouche’s education began when he was a little boy sitting alongside his father as they drove in the pre-dawn mist through southwest Louisiana. They talked balance, pace and soft hands. They talked horses.

Sylvester Carmouche was a jockey. A good one.

He won nearly 700 races at big-time tracks like the Fairgrounds in New Orleans and Louisiana Downs near Shreveport. As Kendrick was growing up, however, the Carmouches were vagabonds, traveling to bush tracks cut from sugar-cane fields and fronted by honky-tonks with names like The Quarter Pole and Cajun Downs.

Sylvester Carmouche had lost his license to ride at the sanctioned racetracks after pulling an audacious, ill-advised stunt during a fog-shrouded race. But Kendrick Carmouche — who on May 1 will try to become the first Black jockey in 119 years to win the Kentucky Derby — never thought of his father as “The Fog Jockey,” as many others did. He thought of him as a Ph.D. in horse racing and as the “Pops” who took him everywhere and taught him everything.

He still does. And he says that before he gets a leg up on a colt named Bourbonic for the Derby, he will hug his father and thank him for making him the jockey and the man that he is today.

“Look, I’m 37 years old and I’ve covered a lot of pavement, put in a lot of hard work and stayed positive through hard times,” Kendrick Carmouche said. “I learned all that from my Pops.”

Carmouche’s presence in the starting gate will be freighted with history. He knows that a Black jockey, Oliver Lewis, won the first Derby in 1875 and that 15 of the first 28 editions of the race were won by Black jockeys, most recently Jimmy Winkfield in 1902.

He is also intensely aware of the nation’s ongoing dialogue about race.

Last June, when racing returned to New York, Carmouche helped organize a moment of silence at Belmont Park for those lost to the pandemic. Then he and more than a dozen fellow jockeys each took a knee in solidarity with those protesting the killing of George Floyd. 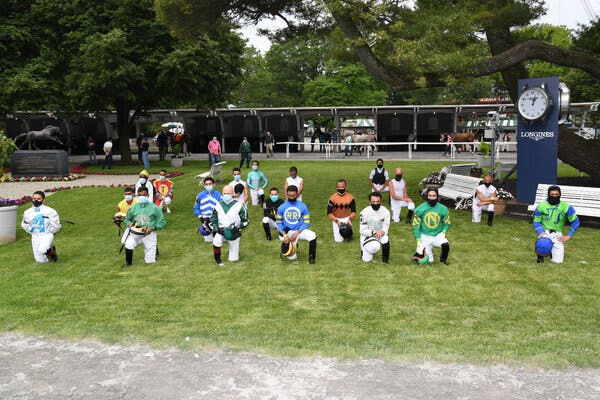 In June, jockeys at Belmont Park took a knee in solidarity with those protesting the killing of George Floyd.Credit…Adam Coglianese/NYRA

But for all the potential significance of his Derby ride, Carmouche said he would be thinking mostly of his father. “He poured a lot of lessons and love into me,” he said.

Lesson 1 was that shortcuts have consequences. Sylvester Carmouche was riding the bush circuit during much of his son’s adolescence because he tried to get one over on racing officials and the betting public.

On Jan 11, 1990, a thick fog settled on Delta Downs in Vinton, La., and Sylvester Carmouche could barely see the nose of his horse, let alone the ones competing alongside him. In the 11th race, Sylvester, aboard Landing Officer, appeared to win easily.

Landing Officer, a 23-to-1 long shot, won by almost 25 lengths and nearly tied the track record for a mile race. Afterward, the trackveterinarian noticed that neither horse nor jockey seemed winded or dirty.

Sylvester Carmouche was accused of slipping Landing Officer out of the race near the start, hiding in the fog until the other horses rounded the track and then charging back into the race, ahead of the pack, near the final turn. The Louisiana Racing Commission found him guilty and suspended him for 10 years.

“I did it. I was wrong. I did my time,” Sylvester Carmouche, 62, said. “The only good thing that came out of it was the time I got to spend with Kendrick and my family.”

Sylvester took Kendrick to school at tracks in Louisiana towns like Carencro and Abbeville, where amid betting coups and zydeco music, and often fueled by Budweiser and boudin sausage, boys had been learning how to ride racehorses for more than a century. Those unsanctioned bush tracks are as much a part of Cajun culture as Sunday Mass and crawfish boils.

Eddie Delahoussaye, Kent Desormeaux and Calvin Borel — Hall of Famers and Kentucky Derby winners — are among the scores of Cajun jockeys who developed their craft as 11- or 12-year-olds tied to the saddle in match races for stakes as high as $10,000.

Sylvester Carmouche won bushels of races on small-town tracks in his youth, as well as in his exile.

When Kendrick turned 13, his father was confident that he had absorbed his tutorials and the hours of practice on the family’s Shetland ponies. So he plopped his son atop a thoroughbred and led him into the starting gate at Acadiana Downs for his first taste of race riding.

“He done good — finished second in a four-horse race,” Sylvester Carmouche said. “He came back with a smile that hasn’t left him yet.”

When Kendrick turned 16, he got his jockey license and began to ride professionally at Delta Downs. He knew at least one person in the jockey’s room — his father. Sylvester Carmouche’s license had been reinstated two years earlier, in 1998.

As proud as he was of his son, Sylvester had one more lesson for him: “I told him to go east. Louisiana was good too me, but there was a big world out there for him to see and to make his own life in.”

So five days before turning 17, Kendrick Carmouche moved his tack to the Philadelphia area to take on the Mid-Atlantic circuit. He met the woman he would marry, started a family and became the go-to money rider at Parx Racing.

Back in Louisiana, Sylvester Carmouche gained attention for a more upbeat reason, as the primary pilot of Hallowed Dreams, a mare who won 25 of her 30 starts, including 16 in a row. He retired in 2013 at age 55 with 1,348 victories on sanctioned tracks and more than $11 million in purses. He still gallops a few horses near his home in Arnaudville, La.

In 2015, after winning five riding titles at Parx, Kendrick Carmouche decided he was ready for New York, America’s premier racing circuit. He introduced himself to trainers by working their horses — up to a dozen a day — in the morning and making the most of his racing opportunities in the afternoon.

In New York, Carmouche is all business. On Wednesdays, he says goodbye to his wife, Whitney, his daughter, Olivia, 15, and son, Kendrick, 12, and leaves his home in Newark, Del., for a two-and-a-half-hour drive to a hotel near the track. He returns home on Sunday after his last race.

This focus has helped Carmouche climb the jockey standings each year, earning more mounts and more money. Last fall, he won the riding title at Aqueduct, his first in New York, and he currently is No. 7 in the nation in earnings.

No one else in the New York Racing Association jockey colony looks like him. Nor did any riders in Pennsylvania, West Virginia, Delaware, or anywhere else he has ridden. Black jockeys were forced out of the sport in the Jim Crow era and now are a rare sight in competition.

Carmouche said his race had never held him back in the sport and pointed to his more than 3,400 career victories and more than $118 million in purse earnings as proof.

“I work hard. I’m nice to everyone,” he said. “If you treat me the same, I don’t care if you are pink or green. I learned that from Pops, too.”

Now Carmouche has his first Kentucky Derby mount, which, perhaps fittingly, is a long shot to claim the garland of roses.

Early this month, Bourbonic went off at odds of 72 to 1 in the Wood Memorial at Aqueduct and trailed the eight other horses for a mile. In the stretch, however, Carmouche smooched at his colt, rubbed its neck and got every ounce of speed to win by a nose.

“All I’ve ever wanted is opportunity,” Carmouche said. “I’ve earned it everywhere I’ve ridden. Now I have an opportunity to bring home those roses. I wouldn’t count me out.”