Crystal Henderson remembers her youngest son, Scoot, running down the basketball court at 5 years old with a gigantic, toothless smile and eyes searching for the approval of his watching parents and siblings.

Now, Scoot Henderson, who turned 17 in February, has reclassified to graduate high school a year early and will join the professional ranks with the G League Ignite.

Listed on 247 Sports Composite as the third-ranked point guard of the 2022 class before his reclassification, he would become the first player to spend two years with the G League Ignite, a team designed to offer elite prospects an alternative to playing in college or overseas before becoming eligible for the N.B.A. draft. He played point guard as a freshman at Georgia’s Kell High School, while his brother C.J. manned shooting guard as a senior.

“I’ve been around my brother who is three years older than me, and his friends are my friends,” Scoot told The New York Times, adding, “Being around older people, the vets on my team, it’ll play out perfectly just getting that knowledge from them too.”

Few modern American basketball players have made the jump to professionalism at Henderson’s age or even had the ability to consider the possibility. The N.B.A. has mandated that players be at least 19 years old and one year removed from their high school graduation since disallowing high school players following the 2005 draft.

The developmental leagues, where players can earn money right away, have made college a less attractive option for some players coming out of high school. Some states have moved to allow college athletes to earn money through endorsements, and the N.C.A.A. has said it wants to ease some restrictions, but at its core men’s college players only have their costs of attendance guaranteed. The Ignite team pays players as much as $500,000.

“You know how every kid has their own path?” Henderson said. “My main goal was just to get to the N.B.A. and be there for a very long time. The fact that I have an opportunity to go there and I’m one step away from it, it’s just huge. And I took that opportunity.” 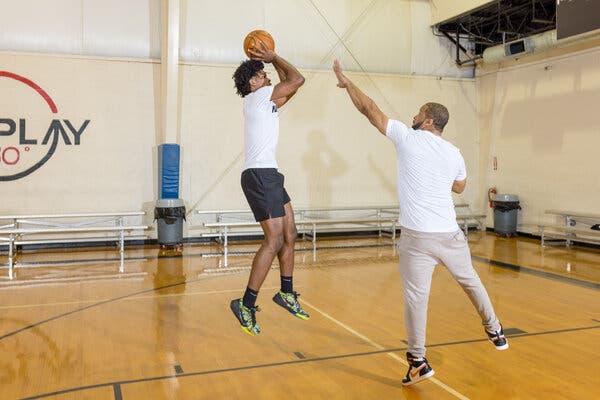 Scoot Henderson training with his father, Chris. I’m extremely happy for him, because I’m tough,” Chris said.Credit…Lynsey Weatherspoon for The New York Times

Jeremy Tyler signed with Maccabi Haifa of the Israeli Super League after his junior year of high school in 2009. Eight years later, LaMelo Ball signed to play in the Lithuanian Basketball League following his sophomore year of high school.

The debate over changing eligibility requirements to once again allow recent high school players who are at least 18 years old into the N.B.A. has resurfaced as elite prospects cycle through college for pit-stop solitary seasons or consider playing professionally overseas.

In the meantime, the N.B.A. created the Ignite team, which has already drawn the ire of some college coaches. The team is headed by Brian Shaw, a former longtime N.B.A. player and Denver Nuggets head coach. Jonathan Kuminga was 17 when he signed to play with the Ignite during its truncated inaugural season. Because of his October birthday, Kuminga is draft eligible and is expected to be an early lottery selection.

Henderson will remain a member of the Ignite longer than if he had gone to college for a season at Georgia or Auburn, his two finalists.

“He can take his time a little bit,” said Shareef Abdur-Rahim, the G League’s president. “There’s no expectation that he has to get everything accomplished in a short amount of time. That takes a little bit of the whatever you want to call it — the anxiety, the pressure, the anticipation — of how he enters this. I think he can really enter it with a growth mind-set.”

Shaw described Henderson’s attacking style of play as “kind of similar to like a Russell Westbrook,” who is one of Henderson’s favorite players, as is Kobe Bryant, one of Shaw’s former teammates.

“I think that just gives him more time to develop and to prepare for his journey and his lifelong dream to play in the N.B.A.” Shaw said. “This is a new situation, and we’re evolving kind of with the teams and this unique situation.”

The Ignite team is not a traditional G League member. Based in Walnut Creek, Calif., a city about 15 miles east of Oakland, the team plays against G League opponents and scrimmages against international teams. The players receive a scholarship to Arizona State University to enroll in online courses and are taught life skills like community involvement and how to handle taxes and interviews. Top prospects like Jaden Hardy, Michael Foster and Fanbo Zeng have already committed to this year’s team.

“So many kids go by and don’t get recognized for their hard work,” Crystal Henderson said. “Parents need to understand it’s a system. You need a great support system. You need to listen to other people. And I find that other sports do that. Tennis does that. Golf does that. Baseball does that. They have a community.”

The family moved from Hempstead, N.Y., to Marietta, Ga., shortly before Scoot was born. He has six tightknit older siblings. Five played in college, including his sisters Onyx and China (Cal State Fullerton) and Diamond (Tennessee Tech and Syracuse). Their youngest sister, Moochie, is one of the top-ranked point guards in the class of 2023.

Scoot Henderson, center, with his family. His mother, Crystal, is on his right, and his father, Chris, is on his left.Credit…Lynsey Weatherspoon for The New York Times

“Our goal is to stick together,” Crystal said. “I tell them: ‘If you each have a dollar, you’re going to starve and die. But if you put your dollar together, you got $7 and you can eat and be very successful.”

Chris has been a coach for years, receiving his basketball education on Long Island courts.

Along the way, Chris went from waking up Scoot to play basketball to having Scoot asking to head to the court early. In November 2018, the Hendersons opened Next Play 360, a gym near their home with an emphasis on academic and athletic development.

Last summer, Scoot began considering playing overseas, and in December, he started planning to reclassify to the Class of 2021 from the Class 2022 and finished high school with a grade-point average of 3.5.

Abdur-Rahim said Henderson had been within the G League’s “overall ecosystem” for a while through his participation with U.S.A. Basketball and elite camps. The conversations began after Henderson reclassified.

“We want to be an option,” Abdur-Rahim said, adding: “In his case, evaluating him from a maturity standpoint, overall structure and support standpoint and just his talent, we positioned him as good as anyone in the class ahead or a year ahead of him. So, it fit.”

The Hendersons are still debating which, if any, of the family members will travel with Scoot to California.

“Honestly, it hasn’t hit me just yet, but I feel like once I get my bags packed and we start going on a plane to go over there, it’ll hit me soon,” Scoot Henderson said.

They Won as N.H.L. Players. They’re Winning in Their Second Acts,...